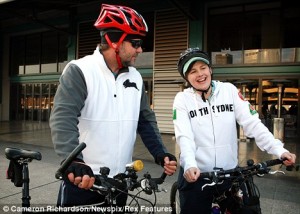 While getting in shape for his next movie, Russel Crowe was recently photographed while getting into shape on his bicycle. Nothing wrong with that, right? Lots of celebrities ride their bikes to stay healthy. Matthew McConaughey even rides bikes with Lance Armstrong. So why not Russel Crowe? Well, I guess the difference is that they don’t stop for a smoke break, and for tacos and soda.

So the media did what the media does best – report on the most important news. In particular, Journalist Annette Sharp of Sydney’s Daily Telegraph wrote an article titled “Smokes and fatty foods — the fitness regime for Rusty.” In the past, I think that Russel Crowe has proven that he is not one to mess with. He seems to take himself pretty seriously, and I think that there are a couple of paparazzi that can vouch for that. Well, in this case, there is one tired journalist.

Russel Crowe, very cordially i might add, invited the journalist out for a bike ride to prove that he is in fine shape – despite his unusual fitness regiment. According to Sky News, Crowe’s spokesperson called Sharp the day after the article was published, and said “Get on your bike. Russell wants you to go riding with him. Are you ready to die?” A 20km (12 mile) ride from Crowe’s home at Woolloomooloo to Bondi was the challenge, and the journalist accepted.

From Annette Sharp’s article after the challenge:

Crowe was waiting at the end of the wharf wearing a South Sydney vest. He offered me one before asking: “You can ride a bike, right?”

Within moments the actor had launched himself from the footpath and into the early morning traffic. By the time I’d waited for the traffic to clear, Crowe was out of sight. The game was to be cat and mouse and it seemed we’d be jumping kerbs.

“You’ll soon realise that from Woolloomooloo, everything is uphill,” he called over his shoulder after we’d found him.

He was right. We climbed up Bourke St and into Surry Hills, then turning our bikes left to the new Redfern Park.

Crowe, the South Sydney team owner, is rightly proud of the transformation here. At this point my duelling opponent had become a tour guide. “This is actually not a workout. This is just something I love doing in Sydney,” he explained, “and LA.”

On through Bondi Junction, up to Bellevue Hill to admire the outstanding view north and east from the summit and then we headed into Cooper Park – off road.

I was sliding exuberantly down the track when, with a thump, I came off the seat and landed painfully on the crossbar. Soon I was on the ground.

This was surely it. His victory moment, with me sprawled in the dirt. Yet he was gracious, concerned – the perfect gentleman as he rolled up my trousers to check my knee.

We got back on our bikes and rode on. Everyone should see Sydney like this.

When we emerged from the gully we were in Double Bay and Crowe decided I’d had enough – 20.3km covered at a speed of 15km/h. Not bad for a first-timer.

“Better than Baz Luhrmann,” he offered. “You’re twice the man Baz is.”

Read the entire article and see photos at The Daily Telegraph