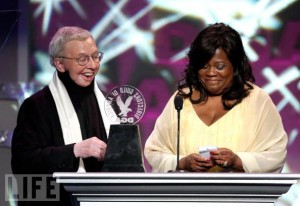 Possibly one of the world’s most famous film critics, Roger Ebert has been left for several years now without the ability to speak – due to a surgical procedure to treat cancer. Breakthroughs in technology have given Ebert a new voice however, and he is ready to predict this year’s Oscar winners on the Oprah Winfrey Show this Tuesday.

A company called “CereProc” has been able to download recordings of Rogert Ebert’s voice from various DVD movie commentary tracks, and program a computer to reproduce it by typing. Ebert is calling this new voice “Roger Jr.” Over the years, Ebert said that friends suggested that it would be easy to program a system from old sound clips of his.

“I kept getting suggestions: ‘I know this guy who says it would be easy.’ Either there wasn’t a guy or he didn’t think it would be easy,” said Ebert in his Sun Times article titled “Hello, This is Me Speaking” on Friday. So he found CereProc online, and decided to see if they could help. He first gave them recordings of his famous review show with Gene Siskel, but they found difficulties with using them.

“They listened to the old shows, and discovered (1) somebody else was always interrupting me, (2) I sounded all worked up a lot of the time, and (3) you could kinda hear the soundtracks of movies playing in the background,” says Ebert.

Luckily they were able to find a solution. Ebert had recorded multiple DVD commentary tracks before he lost his voice. These were isolated, high quality recordings of such movies as: “Citizen Kane,” “Casablanca,” “Dark City,” and “Floating Weeds.” Ebert says that CerePro was able to take enthusiastic sounding sound clips and blend them with calmer clips. His Oscar predictions will be made on Oprah this Tuesday, using the blended voice. When he talks to Oprah, however, he will us a generic voice named “Alex.”