Roger Qbert Reviews “Get Him To The Greek” 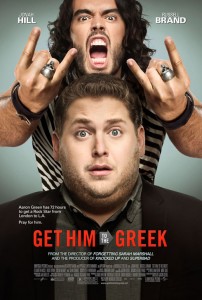 In Get Him to the Greek, Russell Brand reprises the character of Aldous Snow from 2008’s Forgetting Sarah Marshall. The film isn’t a sequel so much as it is a spin-off. Jonah Hill is also back only this time he’s playing a different character entirely in the visage of Aaron Green, a mild-mannered low-level record label employee. When label president Sergio (Sean ‘P. Diddy’ Combs) challenges his workers to come up with something to save the label, Green posits that they find Snow and have him stage a 10th anniversary recreation of his legendary concert (and best selling CD) “Live at The Greek.” Of course, there is one small problem: Snow is a drug-addled has-been surrounded by yes-men who hasn’t performed live in years. Green is given 72 hours to fly to London, pour Snow onto a plane and return him to L.A. in time for the show.

Being a Judd Apatow produced film, we have a pretty good idea what were in for here. Observational humor sprinkled with pop-culture references mixed with a good portion of raunch and just enough heart to (hopefully) still qualify as a date movie. It’s a formula that has served him quite well (Superbad, The 40 Year Old Virgin, Knocked Up). And while there are laughs to be had, it’s the “heart” area where Get Him to the Greek ultimately falls short. The film goes to great lengths (in some of its funniest scenes) to show us the narcissistic, vapid nature of Snow. We see his bloated, self-important and hilariously condescending video “African Child.” We also see his excesses in the worlds of sex and drugs. However, the movie makes a major miscalculation by never showing us Snow at his peak. It’s difficult to believe in, let alone care about, his comeback without any proof that he actually deserves one.

The movie will most likely be compared to The Hangover and for good reason. Both movies feature protagonists falling into a world of sex and drugs that they are woefully ill prepared to navigate. However, the genius of The Hangover is in how much of the debauchery we don’t see. The film’s construct of having its characters attempt to reassemble their lost weekend made their decadence somehow seem all the more, well…decadent. Ironically when we witness similar things firsthand (for instance, Snow convincing Green to smuggle heroin in his rectum) it often feels as sad as it does funny. Unfortunately, Snow’s wild antics never reach the surreal heights of Mike Tyson’s tiger. For all of the film’s bluster about his over-the-top behavior, it never amounts to much more than doing drugs and getting laid. And in the pantheon of rock stars, that’s fairly de rigueur.

On the upside, Brand proves that he can carry a movie (which makes his impending remake of Arthur suddenly interesting). And he and Hill work well together. Sean Combs, as record label owner Sergio, is hysterical as he somehow manages to simultaneously play both to and against type. And Elisabeth Moss, as Green’s girlfriend Daphne, does a masterful job of moving her character beyond the mere killjoy harpy of a partner it was clearly written as. The film has some strong moments but never congeals into a fully cohesive experience. Over all, the film is a somewhat sloppy success…or perhaps it’s sloppy yet somewhat successful.