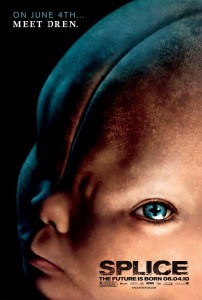 In the new film Splice Adrien Brody and Sarah Polley star as Clive and Elsa, rebellious young upstarts in the field of genetic engineering. They are rapidly rising rock stars in the world of biogenetics. Single-handedly creating new hybrid species; they appear to be on the cusp of revolutionizing medical science. However, when their funding is in jeopardy for not producing results quickly enough, they decide to cross a previously forbidden line: human DNA. Their illicit experiment results in a deformed female creature they call Dren.

As Dren begins to mature she becomes increasingly humanoid; turning from an armless, hairless creature with (what appears to be) the head of a baby seal on the body of a chicken into a lithe winged creature that Clive and Elsa both become entranced by. Clive is conflicted by her very existence whereas Elsa, an independent woman with a psuedo-feminist mindset, begins to view her as the daughter she never knew she wanted.

The trailer is marvelous bit of bait-and-switch (though that’s probably due more to a nervous marketing department than any real conspiracy on the part of the filmmakers). After viewing the trailer you could be forgiven for dismissing the film as Species knock-off. However, Splice aspires to be something more. Elsa, the driving force behind the introduction of human DNA to their experiments, plays like a hybrid all her own; one part Lady MacBeth rapidly watching her plans spin out of control and one part present-day Eve unable to resist eating from the tree of knowledge.

The film has stylish appeal and Brody and Polley are certainly better than the actors that normally turn up genre movies such as this. And the film succeeds largely based on one of the bravest twists I’ve ever seen in a mainstream movie. Your opinion of the film will be decided almost entirely by your opinion of said twist. You’ll either love it or find it laughable. I loved it. Now, to read all that would make you think we have a modern-day classic on our hands; this generation’s Blade Runner. Well, let’s not go crazy.

For all of its high-mindedness, the film never rises above its B-move roots, though that’s not necessarily an insult. The film maintains its level of suspense throughout and manages to shock by doing exactly what you think it won’t have the courage to do. But it’s still a B-movie. Smarter than most and certainly fun if you can get past (or more accurately get behind) what it throws at you in the last half-hour. If you can, you’re in for quite a treat. But it’s a pretty big “if”.