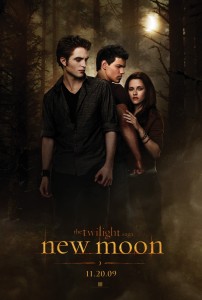 The Twilight Saga returns with its second installment, New Moon. The series revolves around Bella (Kristen Stewart), the love interest of Edward (Robert Pattinson), sparkly vampire extraordinaire. (Seriously, he looks like a stripper sneezed on him.) Bella being decidedly non-vampiresque – that’s a word now – creates quite the conundrum for Edward. He’s desperately in love with her but the smell of Bella’s blood could send him into a feeding frenzy. Therefore he must constantly withhold his passion or risk killing her. As the film opens, Edward and his vampire family are forced to leave town as people are starting to realize that they’re not growing older. Contrary to what Dove Soap commercials would have us believe, being ageless apparently has its drawbacks.

Splitting up our lovers is problematic for the film in that the charisma-less Pattinson, for reasons which still baffle me, has become tween girls’ “It” boy. The girls love his meticulously crafted bed-head and his pale (is there an opposite of swarthy?) good looks. So removing him from the equation for half the film is dicey a proposition given the films core audience. However, the filmmakers have been “kind” enough to give us Jacob (Taylor Lautner), Bella’s Native American friend from the first film. Though he’s two years younger than her, his abs tell us that he’s all “grow’d-up” and ready to get in on the action. Interestingly, he almost lost the part when the studio didn’t think he was up the task of playing a love interest. It’s ironic given that he brings a level of intensity to the role that’s practically Brando-esque when compared to Pattinson.

Jacob helps Bella mend her broken-heart after Edward lights out for the territories. But his romantic feelings for her remain unrequited…that is until he discovers that he comes from a long line of werewolves. Unlike traditional werewolves, they don’t transform based upon the lunar calendar but instead whenever they become angry. (Which means the film is called “New Moon” for no apparent reason.) Once Jacob discovers he’s a lycanthrope who runs the risk of killing Bella should he ever lose his temper in her presence, he chivalrously rejects her friendship out of concern for her own safety…which we all know by now is the quickest way to her heart. So once again, Bella finds herself falling for a boy that loves her so much he might kill her. Boy, does this chick have a “type” or what?

For a movie ostensibly about the battle between werewolves and vampires, there isn’t much in the way of action. Which is a blessing given the state of the special effects in the film. Why does such a major franchise, with such a large budget and so few scenes that actually require CGI, have such lousy effects? Granted, they’re superior to the previous installment’s but the same could be said for any random episode of Wizards of Waverly Place.

New Moon shares many of its predecessor’s problems: a scarcity of action, substandard effects and a cast that thinks great acting consists of nothing more that dramatic pauses and sulking. I found the first Twilight film disconcerting in that it seemed to glamorize domestic abuse. This time out, they’ve added the romanticization of suicide to their repertoire as Edward repeatedly espouses (and acts upon) his desire to die if can’t live in a world with Bella. I guess you could make the argument that 400 years ago people were saying the same thing about Romeo & Juliet…but at least that was good.