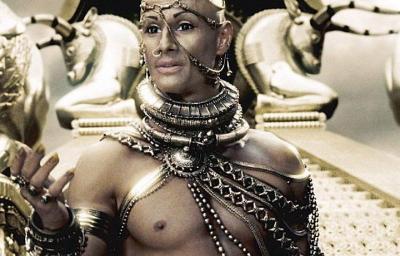 It has now been confirmed that Rodrigo Santoro will indeed return to play Xerxes.

Rodrigo Santoro who memorably played Xerxes in Zack Snyder’s “300” was recently asked about the upcoming sequel “Battle of Artemisia”.  When asked about the possibility of returning to the role, he had this to say:

“We are talking about it.  Let’s see what happens.  It’s a long story, my friend.  A long story.”

While that comment seems extremely vague, he went on a little more to talk about the project.  What he had to say next leads me to believe that his return is more of a possibility than we think.

“The movie is set at the same time.  The idea is to show another point of view.  While that battle from the first 300 is taking place, there were others going on…Actually, it’s all of this and then there is an intersection point with the first movie.  It goes back and then goes beyond that.  That was the initial concept.”

I may have misread initial reportings, or this may in fact be new to everyone.  But I was under the impression that “Battle of Artemisia” was more of a straight prequel.  This quote from him, to me, makes it seem like much more sense to bring him in to reprise the role since the two stories would have taken place simultaneously.  I am sure we will see a lot more twists and turns in this project as production finally gets underway.  So check back here for all your updates.