My old ball coaches used to tell me a lot of things as I hit the field, namely, “Kelley! Stop screwing up!” and “Thanks for costing us the game, Kelley.” On occasion, though, they also imparted words of wisdom, such as, “Don’t be flashy. Just do it right, and you’re ahead of the game.” 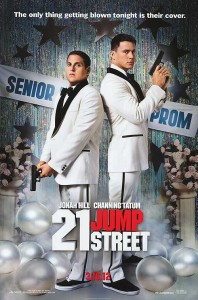 Seems like the producers of 21 Jump Street shared the same coaches as I did. This isn’t a film that’s going to re-invent the wheel. It won’t win any awards for originality. It will, however, make you laugh harder than you’ve laughed in a long time.

Those of you who born in the 70’s or earlier may remember the television show “21 Jump Street,” which featured then-unknown actors such as Johnny Depp and Holly Robinson as police officers who go undercover as high school students, delivering inspirational messages such as equality and “don’t do drugs.”

Schmidt (Jonah Hill) is the typical loser in high school who has few friends and fewer ladies interested in him. He tries to ask the most popular girl in school to prom, but gets laughed at by her and her friends, namely Jenko (Channing Tatum). Jenko is popular and athletic, but is struggling with his grades and barely graduates.

Seven years later, both have been accepted into the police academy in the same class. Although initially hesitant, the two quickly realize their assets complement each other’s weaknesses and they work together to ensure they both graduate; during the process they magically become best buds and are eventually assigned to the same patrol.

After their first big arrest goes awry due to Jenko forgetting the Miranda rights, they’re reassigned to a special new unit, located at 21 Jump Street, formerly a Korean church. Their new captain, Dickson (Ice Cube), assigns them to infiltrate their old high school and find out who’s responsible for a new designer drug that kids have been taking, with occasionally fatal results. In one particularly awesome scene, Schmidt confides to a crucifix bearing a Korean Jesus he’s afraid of confronting his past insecurities, which sets the tone for the rest of the film.

Point one, this film is not for the easily offended. There are several jokes throughout that will make the politically correct cringe. If you normally take offense to crude humor, I’d suggest avoiding this one.

Once the two get on campus, they struggle at first to find footing with the other students. Jenko finds his old ways are no longer popular and they nearly get expelled. Schmidt meets a cute girl in one of his classes, Molly (Brie Larson), who points him in the direction of the drug dealer, Eric (Dave Franco). From there, Schmidt and Jenko have to work together to find out who’s supplying Eric with the drugs before their captain pulls them from the assignment.

As much as I dislike Channing Tatum, I have to admit that he and Hill work pretty well together. Both of the actors and characters are thrust into uncomfortable roles. Tatum’s typically accustomed to playing the ladies’ man/jock, but thanks to a misunderstanding with the principal, he is assigned to honors classes, where he befriends the geeks/nerds he used to terrorize in school. He also catches the eye of one prurient teacher (Ellie Kemper), but never yields to her. Hill, on the other hand, takes the easy courses and is forced to run track under the eye of Coach Walters (Rob Riggle) and hits it off with Molly, who’s just looking for a nice guy, which Schmidt happens to be. They go somewhat out of their comfort zone, but still work well enough together.

The real star of the film, however, is the writing. This is easily the funniest movie I’ve seen in a long time. The movie never takes itself too seriously, and even goes out of the way to make fun of itself and other films in its genre at times (the car chase scene towards the end is a riot). Tatum and Hill both have several memorable one-liners, and as we were walking to our cars, Lauren, Andy, Erin and I found ourselves quoting the movie several times. Fans of the original television series will be pleased to see several cameos by some of the stars from the show. I won’t reveal who, but you can probably guess at least one of them.

If there’s one major gripe I had, it’s the second half the film. The first half is really funny and paces itself well, whereas the second half slows down and begins to turn into a sentimental tale. The final twenty minutes or so picks the pace back up and ends the film on an appropriate note, but the build up seems to drag on for a while. There are also some rather awkward moments that the film for some reason chooses to ignore or gloss over, such as the attraction between a high school student and a 25-year old, as well as Ellie Kemper’s character coming onto a student while in school.

Those thirty minutes or so, though, won’t prevent me from recommending this movie. It is what it is, an adult slapstick comedy. Dispense with the romantic comedies; those were for Valentine’s Day. Check out 21 Jump Street instead. The premise isn’t new or inventive, but it doesn’t have to be. This isn’t a filet mignon doused in cognac next to a twice-baked potato; it’s a pound of bacon, cooked in the perfect amount of grease for just the right amount of time.