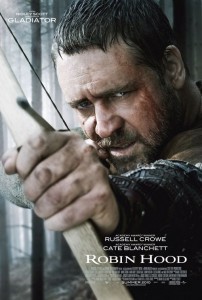 Ridley Scott and Russell Crowe reteam yet again for a new spin on the Robin Hood, a grounded origin story, and while I enjoyed much of the film there is a lot of things you catch yourself going; huh?.

We all know the story of Robin Hood, right?  Well Scott and Crowe take us on a journey that ends with Robin becoming of the Hood and we see how he got there.  An archer in Richard the Lionheart’s army returning from the crusades, Robin and a couple of his friends end up in the position of delivering the crown the young King John.  John who begins taxing and abandoning his subjects while inadvertently assisting a French attempt to invade England causes a lot of problems for the country and Robin will end up in a role to right it.

Scott, per usual, creates a wonderful and beautiful world to play in and effectively recreates 13th century England for the cameras.  From the castles, to the matte paintings, and the weapons, armor, and garb everything has a wonderful authentic feel and really helps you dive into the world.  The action is also creative and has plenty of moments you can say you have never really seen before and Scott is clearly not content to rehash the same medieval action sequences of his previous efforts or anyone else’s.  There might not be a lot of action in the film but they are clearly the high water marks for the picture.

The issues I have with the film is its lack of consistent tone, to the effect that each act of the film almost feels as if it was written with a completely different idea in mind what it wanted to be.  The first act is a mostly serious, grungy, down and dirty medieval epic with an interesting story and clever spin on how Robin ended up in Loxley.  Sure the whole Godfrey/John plot is a bit rushed and could have been clarified a tad and Robert Loxley could have been a bit more developed but I was digging it even if it wasn’t blowing me away.  And I applaud Scott for taking a route that felt different than most any other film in this genre in recent memory; it was a hero’s journey but filled with a lot of twists and turns.

The 2nd act is supposed to be a bit romantic, a bit lighter, and adds a tinge of humor and this works to an extent around Robin, but everything else, and even the Robin stuff, isn’t incredibly engaging or interesting.  Crowe and Blanchett, as Marion, have some fun banter and back and forth yet it feels out of place compared to the tone of the first act.  The change isn’t all that drastic but it catches you off guard as you try and settle into this slightly different film.

And of course just as you get settled and used to this new tone the film throws all of its attempts at being different and seemingly un-Hollywood out the window and brings in ridiculous and convenient leaps in plot, faith, and lines that get the eyes rolling.  I was seriously asking myself, “where did this movie come from?”  It seemed like almost a different movie from the closely toned 2nd act but almost completely foreign too the films fresh and different first act.  Luckily the final battle is pretty solid and original but even it can’t avoid a few moments of, “seriously?”

Scott gets good work out of his actors as usual, Crowe is solid and has swagger but he has been better.  Same goes for Blanchett who creates a bad ass version of Marion but she has turned in superior work compared to this.  The “merry men” are underdeveloped but Kevin Durand is enjoyable as always and I liked seeing Scott Grimes as Will Scarlet.  Danny Huston steals his scenes, like he always does, as the Lionheart and I hope there is an extended cut with more scenes of him lying around somewhere.  Max von Sydow is great as always as well as the Lord of Loxley.  Mark Strong is an effective baddie as Godfrey though rather one note and Oscar Isaac plays Prince John to slimy affect.  Lastly, it’s nice to see William Hurt as Marshall but he is underwritten/cut down like many of the characters in this film.

In the end, Robin Hood is an interesting attempt at a medieval epic that unfortunately gets more and more traditional as it goes.  I really enjoyed the rugged and down to earth start but by the end things are far to traditional, sappy, with far too many characters and plots left underdeveloped and pushed forward for no real motive or reason.  I would love to know if Scott has a directors cut hiding somewhere, he usually does, because if he fleshes out some of the supporting cast and makes the third act less convenient there is a potentially much better film here.  As it stands it’s an odd mix that has a lot of things you can nit pick and while it can be rather enjoyable will probably leave you far to befuddled.

Robin Hood is a C+

Another take from Kevin:

Ridley Scott’s version of “Robin Hood” is visually impressive, but fails to execute the sense of action and thrills that audiences expect. Russel Crowe plays a part that seems to be made for him, rather than embracing the character that everyone knows and loves.

“Robin Hood” tells the story of the events that lead up to the title character’s decision to rob from the rich, and give to the poor. We are introduced to the characters that we know; Robin Hood, Maid Marrian, Little John, Friar Tuck – and even the good old Sheriff of Nottingham are all included. But rather than retell the classic tale, this film is more of an origin story of how “Robin Hood” came to be. King Richard “The Lionheart” (Danny Houston) has virtually bankrupted England from his Crusades. Robin Longstride (Russel Crowe) is an archer in his army, fighting to get paid and ready to go home. While storming the last castle before they return to England, King Richard is killed and Robin falls into the task of bringing home the crown. In order to not be accused of killing the King himself, Robin takes the identity of the knight that was protecting the King on his Crusades. Robin’s band of merry men, also members of the king’s army, follow suit and head back to the mainland. When they return, they witness the crowing of King John (Oscar Isaac) – Richard’s brother – who decides to over-tax the country and replenish his wealth. But in this story, there is no time to rob from the rich. France is planning to invade England, and steal the country with the help of an insider and friend of King John – Godfrey (Mark Strong).

The movie really looks incredible, and the acting is up to par. The problem is that something just doesn’t feel right. The story of Robin Hood that we all know is one of action, adventure, and charisma. But this new story – a prequel, if you will – is only interesting at best. At many times througout the film, the film slows down and becomes void of anything exciting. To try and counter-act this, director Ridley Scott keeps the movie bouncing around from one country to the next. It starts to feel a little too choppy, and it would have been nice to have more happen before moving to the next location. Although there were some battles, they lacked the choreography to be much of interest. While the story is somewhat interesting, it lacks the excitement that it needs to make you really care about what is going on.

The acting in the film is good. I have to say that Russel Crowe does a fine job given the part, but his personality is a little tough to play a character that is generally thought of as charismatic and witty. Although he cracks a few smiles here and there, he seems a little too rigid. Mark strong plays a great villain, as we are starting to see in his recent roles. Cate Blanchette plays a strong Maid Marian, who we find is quite independent and hardly needs the help of Robin. There was a certain lack of chemistry between the two that leaves me skeptical of how the two would ultimately fall in love. But I suppose the valiant actions of the hero might be enough to change her mind.

“Robin Hood” had the potential to be a blockbuster, but instead comes of as a lackluster action flick. If you like the story of Robin Hood, the movie is interesting and provides a back-story for the well-known character. But if you are expecting a fast-paced, action-packed thrill ride – it will most likely not meet your expectations.