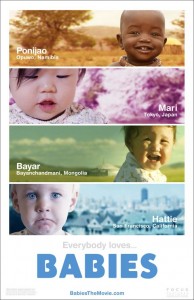 Babies is an engaging, cute, and informative documentary that is able to tell the story of growing up through pure imagery and capturing the marvel of the growth of a baby into a child.

Taking us through the story of four children from four very different societies allows us to see the differences in parenting, what it means to grow up, and how parenting styles differ drastically from culture to culture.  The film uses no interviews, no narrators, just pure imagery a lot of which seems to have been shot by set up cameras and captures the moments naturally for almost all four subjects.

Bayar is a boy born to migrant goat herders in Mongolia and gives us a look into a society of the old and the new.  While isolated and primitive by American standards the family has a few modern amenities and there way of life isn’t entirely foreign from ours.  Bayar’s story brings a number of laughs and it’s most interesting element is watching how his older brother interacts with the young baby and the results are almost shocking at times.  Bayar’s brother is quite the little devil and raises a lot of questions on what the nature of children is as he messes with his little bro and is clearly not happy with his presence.

Mari is from Tokyo and she lives a life rather similar to that of a child in America.  Her story is the most uninteresting if you ask me but it is still engaging in a comparison to the perspective of childhood in our own society.  Parenting is given its most screen time with Mari and watching the parents passively operate through the day and letting the baby be is something we aren’t used to seeing at such a young age.  Mari also has one of the films funnier tantrums as well as she plays and finds sorrow in anything she tries to do.

Ponijao is our most contrasting baby as he is born into a tribe of Namibia and the only electronic device in the village is the camera filming them.  He rolls around and plays in the dirt, walks around practically naked, and has no male role models outside his other boy aged brothers and friends.  You will be baffled at some the things the mothers let him do and get into but it goes to show that the way we think you should raise a child isn’t the only way and a baby can prosper even in a primitive environment.

Lastly we have Hattie from the San Francisco Bay Area and even she gives us a bit of a view of childhood we don’t normally see as her parents are quite interesting in their parenting choices.  Hattie’s story also seems the most unnatural of the four and seems rather controlled by the parents in that it is almost to perfect.  There is only one incident or misstep in her story and it just felt so manufactured to me.  The impression you get of the parents, who are suspicious also the only parents that appear in almost every scene with their kid, is that they don’t want to look bad or that they made mistakes and I feel like that goes completely against the purpose of the documentary.  Hattie is quite cute and funny when she is on her own, providing the films best laugh actually, but I can’t help but conclude that her story was the most artificial.

In the end, Babies is a great idea that is executed fairly well.  It could have been a bit leaner and I think a couple of interviews about the parent’s thoughts would have been interesting but it works without those still.  I thought the stories outside Hattie’s were extremely real and genuine and made for an educating and illuminating experience I just wish I could say I felt the same about all of it.  Either way, it is cute, has plenty of laughs, and you are bound to be enlightened to a way of life you have never seen before and that is what a good documentary should do; take us into a world we know little about and enlighten us along the way.  I think Babies does this quite well most of the time.

Babies is a B-