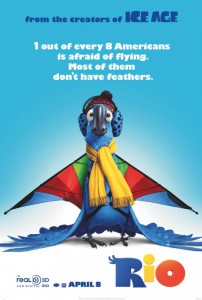 There is a lot of talent in a little animated film. Blue Sky, best known for the Ice Age series, is branching out to a different form of talking animals with their next feature. Once again though, the lead character is on the verge of extinction, but for completely different circumstances.  There are a few things this trailer makes me think about, one is the fact that Jesse Eisenberg and Anne Hathaway, who are two of Hollywood’s hottest stars, are in an animated movie. The second and more pressing thought is wondering how George Lopez continues to get movie roles? I can’t be the only one who is annoyed by his presence, right? Rio looks like a solid animated flick, but will it have more depth than the Ice Age series?

A nerdy macaw leaves the comfort of his cage in Minnesota and heads to Rio de Janeiro.