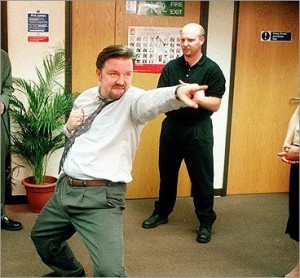 Ricky Gervais is enduring possibly his largest amount of publicity ever with his hilarious, and somewhat controversial (to only the people he made fun of) hosting of the Golden Globes.  So, it only makes sense that a big announcement about him reprising a popular role on a current sitcom would come at a moment like this.

Gervais, who is the creator of The Office, the original BBC sitcom starring himself in the starring role as bumbling manager David Brent, is set to reprise his role on the American version of the comedy, also titled The Office.

It has been rumored for over a year now that Gervais’s Brent and Steve Carrell’s Michael Scott would face off in an episode,  but the rumors had been denied time and time again. It now appears that producers are wanting to take advantage of Gervais being a hot topic, and with Carrell leaving the show towards the end of the year it only makes sense to do it now.

There aren’t a lot of details about the encounter, but it should create for a start to an epic send off of Steve Carrell on the show.