Is American Idol’s Alex Lambert Homeless? Get the Answer Here! 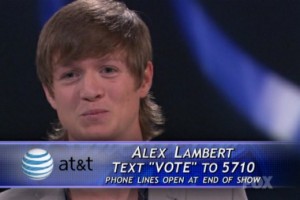 Until he got rid of the mullet, there is no way he'd be sleeping on my couch. I don't care how sad he looks.

The internet has been lit up by rumors that American Idol Season Nine contestant Alex Lambert (no relation to Adam Lambert) is homeless, and is living on the streets of LA. What would give anyone this impression? Oh maybe that Lambert himself tweeted those sentiments to his followers on Twitter yesterday.

“Alright so I didn’t want to bring my person life to my fans but I’m about to freak out if I don’t tell yall the truth,” he wrote.

“Ever since IICD ended I’ve been kinda homless! Sleepin on the street and behind buildings. I have a choice to stay and persue my career or go back to texas and not do music! I’m usually a strong person but I can’t take it anymore.”

“I’ve been goin to coffee shops and other stores so I can tweet to my snaf! Because to be honest! You guys are all I really have!

“O my goodness yall! I have been crashin behind building and sleepin outside but I don’t want nobody to feel sorry for me! I’m a grown ass man.”

Seems like quite a predicament to be in, right? Well, not so much according to a PR person from XIX Entertainment, who stated, “”Alex is not homeless. He’s been crashing on friends’ couches while looking for an apartment, but he’s getting a retainer and working on demos.”

So, basically Lambert wanted to have a pity party that consisted of him and a few thousand people on Twitter. Despite having signed a deal with Simon Fuller’s XIX Entertainment for If I Can Dream, and currently making new music, he is apparently “homeless”. While I’m sure it gets old jumping couches in the LA area it isn’t the same thing as sleeping on the streets. I also have trouble believing he makes less money than a lot of the impoverished community living in LA currently.

Lambert later tweeted he didn’t tweet about his situation for publicity, because he doesn’t care about fame. I’m sorry, but isn’t that why someone goes on American Idol in the first place?  I don’t know how stupid this kid thinks everyone else is, but not everyone is naive as he is.