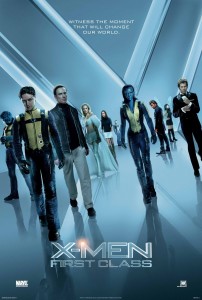 X-Men gets the reboot/prequel treatment in X-Men: First Class.  What could have been a phone-in FX-fest is instead the best comic book film since The Dark Knight and the strongest Marvel film since Spider-Man 2.  (And that’s far from a backhanded compliment in light of Marvel Comics track record over the last decade.)  X-Men: First Class is everything a summer blockbuster should be: smart, witty, charming, sexy (but not too sexy) and action packed.  It seems destined to become a classic of the genre.  For the uninitiated, The X-Men is a team of super-powered heroes who protect the world from evildoers.  Because their abilities were gained via mutation, their place in the world has always been tenuous at best.  They are often said to be the next step in human evolution, which makes many of those who are about to get bumped down a notch on the food-chain a teensy bit apprehensive.

The over-arching theme of the X-Men franchise (both the film and the comics) has been their ongoing battle for acceptance and it’s no coincidence that the series was created at the height of the Civil Rights era.  Should they be proud of their differences or attempt to assimilate?  Just how much latitude can and should be granted in an effort to accommodate other’s fear?  Compounding the complexities is the fact that some mutants actually are bad guys that do bad things which, rightly or wrongly, affects how the world views all mutants.  The film, as the title suggests, not only brings the franchise back to its origins but is set in the same time period as the aforementioned Civil Rights movement.  Taking place (largely) in 1963, this might very well be the first comic book movie to take place during the same era in which the characters were originally published.

The film follows Charles Xavier (James McAvoy) and Erik Lenhsherr (Michael Fassbender) on their path to becoming Professor X and Magneto, respectively.  Painting with broad strokes, Professor X is Martin Luther King, Jr. to Magneto’s Malcolm X.  Whereas Professor X was willing to work patiently (and non-violently) towards acceptance, Magneto was more apt to demand equality and less apt to turn the other cheek.  Granted, Magneto is a super-villain; Malcolm X…not so much.  Keep in mind that the character was created two years prior to Malcolm X’s life-altering pilgrimage to Mecca; public perception of him at the time, combined with the comic’s creators (i.e. white dudes), makes using the two civil rights’ leaders for topical, if somewhat simplistic, inspiration not all that unsurprising.  But given the state of comics at the time (BAM, POW, ZOOM), it was actually a pretty heady concept.

While McAvoy and Fassbender are far from A-list actors, if this film is any indication, that’s all about to change. McAvoy imbues Xavier with a breezy air that’s initially counterintuitive (he is after all destined to become the stoic Patrick Stewart) yet makes perfect sense once you see it.  He’s a fast-talking charmer with the smarts to back it up, and quite a bit handier with the ladies than one might have expected.  And Fassbender brilliantly portrays a conflicted Magneto; torn between his quest for vengeance and a group that offers justice but not closure.  The two are opposite sides of the same coin and form a fast friendship.  It’s a bond that’s made all the more heartbreaking, given that we know how it will end.

The film is well-paced and set against the backdrop of the 1960’s, it takes on an early-James Bond feel at times.  There is a sprawling cast, but director Matthew Vaughn makes sure we are never caught asking ourselves who is who.  The film has a story to tell, which is rare for a comic book film (though admittedly getting less so) and the action punctuates the plot rather than pausing for it.  X-Men: First Class exists in a dark world, though not as dark as say The Dark Knight.  While it’s light on blood and gore, there is violence and it has very real consequences.  People are damaged; others die.  Characters perform despicable acts of cruelty.  But this isn’t violence for its own sake.  The film has an earned emotional weight that this genre is so often lacking.  That being said, it’s not all doom and gloom either.  The script is also fun and surprisingly witty.  And while the aforementioned The Dark Knight was an amazing film….how much fun did you have?