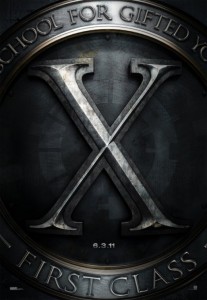 X-Men: First Class is a great comic book film that is anchored by a fantastic cast and resets the X-Men universe in an era ripe for potential future films.

The film opens up right where the franchise did, with Erik Lehnsherr being separated from his family at a Nazi concentration camp and ripping a fence down in the process.  Where we go from there is all new. After an introduction to Mystique and Charles Xavier who have become childhood/lifelong friends we catch back up with Erik who is hunting down the Nazi’s who tortured him and his family in the camp.  Erik’s main target is Sebastian Shaw, a mutant himself who has collected a few others (mutants) around him, and Shaw is hatching something sinister between the U.S. and Russia.

The film is set right in the heart of the cold war, the Soviets and America on the verge of nuclear war, and Kennedy is in the White House trying to diffuse the situation.  The unexpected help comes from these newly discovered mutants and this fresh new era really gives the series a fun playground to play in.  The 60’s look is cool, sexy, and allows the characters to have a lot of fun, especially in these younger incarnations of these characters.  The two leads, Erik and Xavier, are of course Magneto and Professor X from the films we are familiar with and getting to see them as young men is really quite fantastic.  From the Professor’s womanizing and lame pickup lines, or Erik’s Nazi hunting background, the film makes these characters fresh and we look at them anew.  In fact, I want to see a whole movie about Erik in the days we missed between the concentration camp and were we pick up with him as an adult.  Magneto hunting Nazi’s is fantastic in the short bursts we get here and leaves us craving for more.

Mixing the mutants in with American history is a compelling narrative and director Matthew Vaughn and writer/producer Bryan Singer nail it right on the head.  The potential for future films in this reboot of the franchise are endless and if they were smart they would continue to blend the mutants’ history into our own.  In fact, one of the film’s writers has a brilliant potential opening for the sequel.

The 60’s in particular gave the film a ton of style and the filmmakers were sure to take full advantage.  Whether it’s the sexy outfits for the ladies, the sharp suits for the men, or the atomic era serving as an excellent plot point, the two worlds just fit perfectly together.  I almost don’t want them to leave the times set up here, but it could be cool if they could bend the franchise to fit with subsequent eras.

The film has a lot going for it, as you can see, but its cast takes things to the next level.  It all starts with Michael Fassbender as Erik who has, hopefully, finally cemented himself as a superstar.  Fassbender is phenomenal in the film and we can’t get enough of him.  He is cool, powerful, and tortured as a young Magneto and I can’t wait to see where he takes the character in future films.  Nearly matching him is Kevin Bacon who rocks as Sebastian Shaw.  One of the best villains in recent memory, it is a shame we didn’t get more of him here.  Bacon steals every scene he is in though and somehow makes that helmet look cool on someone else besides Magneto.  James McAvoy is not far behind those two and completely changes the way we look at Xavier.  Smooth and fast talking, McAvoy is a blast to watch, but he is more than capable of nailing the reserved leadership role he needs to take as well.  Like Xavier, Mystique is given a surprising amount of depth and background by Jennifer Lawrence who gives so much to a character we didn’t really know.  Lawrence has the looks and the chops to make a blue person compelling as she continues to prove she is one of the best young actresses around.  Nicholas Hoult steps up his game as Hank McCoy and gives him a reserved nerdiness that is needed to make his transformation into Beast all the more effective.  Rose Byrne plays the straight character in the picture, but does a fine job nonetheless; I just think she has the ability to be given an even more complex character.  January Jones is also unfortunately not given a whole lot to do as well, but she is gorgeous and fits the character’s persona just fine acting wise.  The rest of the cast is a series of familiar faces and they all do pretty great work across the board; I particularly enjoyed their casting of a lot of “that guy’s” for smallish roles they could have given to anyone.

In the end, X-Men: First Class is a great entry from the Marvel brand. The film is fast paced, the action beats are great, and the cast is about as strong of an ensemble that you could ask for.  Fans of the franchise will most likely find this to be the best yet, I surely did, and newbies can jump in and feel right at home.  Vaughn throws a ton of characters at you and most get their due without relying on the viewers’ prior knowledge.  First Class is the superhero movie to beat this summer and I can’t wait to get back into this world.

X-Men: First Class is an A