Review: ‘West Side Story’ at the Fabulous Fox Theatre is One Spectacular Show 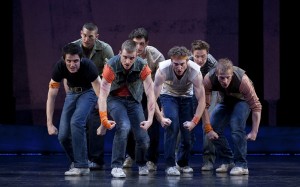 The First National Tour of West Side Story. © Carol Rosegg 2011

It has been over fifty years since the original Broadway production of West Side Story wowed audiences for the first time. Yet the timeless love story is still one of the most memorable and beloved, and is giving fans young and old a chance to experience the magic. From beginning to end the spectacular music, dancing and acting will have you captivated and tapping your toes along with every performance.

The story takes place in New York, and follows two rival gangs: The Jets and the Sharks. Riff, the leader of the Jets, plans to challenge the Shark’s leader Bernardo to a brawl to take back their turf once and for all. But the gang tells him that they need a Lieutenant for the fight, and that has to be Tony – who started the gang with Riff, but has since left. Out of loyalty, Tony accepts to meet with the Sharks at the neighborhood dance that night, but doesn’t want anything to do with fighting or gang-life anymore. At the dance during a dance-off between the men and women of the rival gangs, Tony meets eyes with Maria – who happens to be Bernardo’s sister. The two immediately fall in love at first sight, but are soon separated by Bernardo. After the dance, Tony climb’s the fire escape of Maria’s home and the two of them profess their love for one another. Maria tells Tony that her family could never understand what they are feeling, but he assures her that it will all work out. Knowing that the two gangs are planning to fight each other with deadly weapons, he convinces Riff and Bernardo to make it a fair fight. But as what starts off a fair fight soon turns tragic, the star-crossed lovers’ relationship gets a whole lot more complicated. 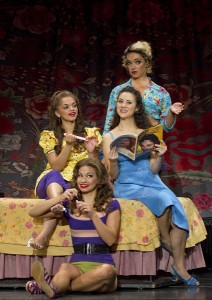 West Side Story is a brilliant concept, being adapted from William Shakespeare’s Romeo and Juliet over half a century ago. The original story itself is timeless, and the book written by Arthur Laurent is no exception. The story of two young lovers for whom it seems impossible to be together truly captivates the audience’s hearts and souls, and you can’t help but to feel sorry for the two. It is very clever how the classic tale is modernized and retrofitted to work with the gangs of 1950’s New York. And even today the story holds true, when compared to the racism and bias that still infects parts of our country.

You simply can’t say enough about the music and lyrics for the show. The classic songs featured throughout West Side Story are ones that most people will know right away, even if they have never seen the musical before. Numbers like “Jet Song,” “Maria” and “America” will have you singing them long after the lights are out and the show is over. 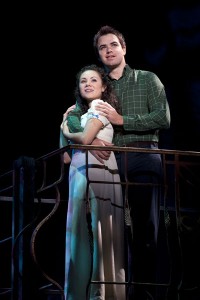 Not only did the two leads in the show have great chemistry together, but their voices were absolutely phenomenal. Ross Lekites and Evy Ortiz as Tony and Maria were great choices to play the love-stricken teenagers. Every time that they would open their mouths and start to sing, you couldn’t help but to feel a tingle through your body. As soon as Lekites sings his first solo “Something’s Coming” after agreeing to meet with Riff and Bernardo at the dance, you know that you are in for a treat the rest of the show. “Maria” is also beautifully performed, and is one of my favorite songs in the show. After the two meet for the first time and instantly fall in love, it shows just how passionate Tony is about Maria. The feeling is reciprocated when Lekites and Ortiz perform a beautiful duet with “Tonight.”

It is no wonder that West Side Story won a Tony for Jerome Robbins’ choreography in 1958. Every move from the clever dance-fights to the meticulously crafted dance numbers are memorizing. Each move was performed perfectly in unison by the entire cast and company, as the actors became one smoothly flowing being. The dance-off at the gym in the first act is a lot of fun to watch, as the entire company is on-stage dancing their hearts out.

No matter how much time passes, or how it is told, the story is one that will never get old. This new revival of West Side Story is fresh and fun, and is sure to please audiences new and old. Whether you are going for the fantastic music, timeless love-story or brilliant choreography, you are sure to have a good time at the theatre with this one. 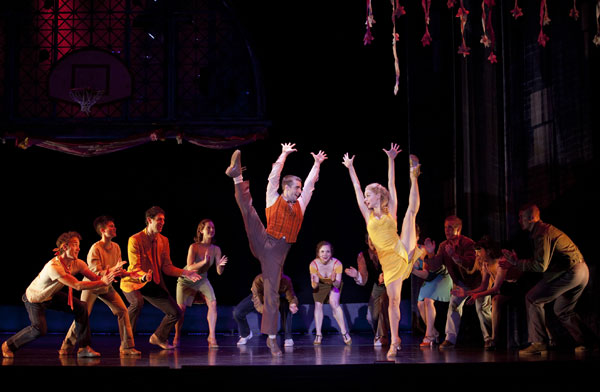 The First National Tour of West Side Story. © Carol Rosegg 2011