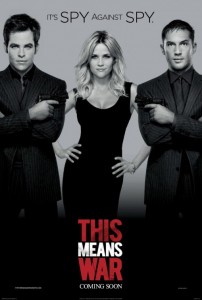 This Means War is a difficult movie to review, not because it doesn’t have its pitfalls and charms. In fact, quite the opposite, the charm steals much of the limelight away from its pitfalls. This is the type of film my friends will go to and think, “What bad thing could you possibly say about that Blake? It was fun.” Too which I would have to concede that it was indeed “a lot of fun”, but it doesn’t get off the hook that easily.

Tuck (Tom Hardy) and FDR (Chris Pine) are elite CIA spies who like all good movie spies, shoot and ask questions later. Apparently the CIA has something called “protocol” for covert operations, and their run and gun style gets them benched for the time being.  To pass the time, the sweet-natured Tuck joins a dating site, and meets Lauren (Reese Witherspoon). After the two confirm that neither are online psychos, they share a sweet date, and a promise for more. As luck would have it, FDR runs into Lauren while prowling the video store for women. Initially she is turned off by his brashness, but through persistence he wears her down, and she grudgingly goes on a date with him.  Lauren quickly falls for both men, and they find out they are competing for the same woman. Having apparently never heard of the “bro code” they turn it into a competition of who can woo her, which leads to all kinds of implausible scenarios. The two must choose between love and friendship.

Despite the inane plot, Pine and Hardy turn what could have easily been an awful movie into a fun affair. Both men are destined to be stars, and the way they make basic formula plots into entertaining pieces tell you everything about their capabilities.  The film is essentially a vehicle which allows them to try and outcharm each other. Hardy plays a softer role than we’ve seen in the past, a spy with a heart of gold, and sells the character well. Pine on the other hand plays a character very similar to his popular turn as James T. Kirk in Star Trek. FDR is a bit more of a jerk than his Kirk, but he has the charming womanizer role down pat.

Witherspoon continues to have a spunk that lends itself well to the role she plays in the film.  The character could have easily been dismissed as she plays two men like fiddles the entire film. Instead Witherspoon is as cute as a button, and allows the audience to believe that she could have two men fall for her. Her best friend, Trish (Chelsea Handler), is the over the top friend every romantic comedy has, and is easily one of the weaker points in the film. Handler’s Trish is easily the most repulsive of the bunch, but it appears that the role calls for it, so I think we can say job well done.

Where This Means War falls flat is in plot. It’s one gimmick, with a built in bad guy, that could have easily been one episode of NBC’s Chuck.  This doesn’t mean it is bad, and luckily the cast is able to take the thin material and turn into something worth watching.  It’s hard to criticize something that is so fun at times, but I can’t shake the feeling that 6 months from now people will forget it ever existed. It won’t go into the pantheon of great romantic comedies, but it’s a generally fun way to spend an hour and a half.

This is a perfect date movie, enough action for the men, and enough romantic comedy elements for the women. It’s base humor, but it’s effective. Don’t go in expecting a masterpiece and you’re likely to walk out with a smile on your face.