Well, at the outset of the 2011 season, this position seemed like it’d be locked up by Colby Rasmus for the next decade. Rasmus was just coming off an underrated 2010 campaign (.276/.361/.498 with 23 HR and 66 RBI, his .859 OPS was tops among major league centerfielders who qualified for the batting title), and at just 24 years old, his future looked bright.

The 2011 season, however, was nothing short of a disaster for him. His hitting took a precipitous turn for the worse, and his fielding never progressed as people had hoped. By mid-summer, he found himself in Tony La Russa’s doghouse, and he was traded to Toronto.

Unless you’re a stat fiend, you probably couldn’t have guessed that Jon Jay appeared in more games last season than any other Cardinal. Jay was absolutely phenomenal in the first half, but as the season wore on, his statistics took a slow but steady descent. His numbers were still pretty decent at the end of the season, but questions persisted as to whether pitchers were figuring out how to pitch around him. These questions were magnified in the post-season, as he hit just .182/.262/.218 in the playoffs. As a lefty, Jay tends to hit right-handed pitchers better (.299/.347/.432), but his stats against left-handed pitching weren’t terrible (.287/.333/394).

Jay played all three outfield positions, primarily center field, where he was rated as slightly above average defensively. He turns 27 in March, so chances are he’s not yet reached his peak offensively, and he’s under team control for the next four seasons. 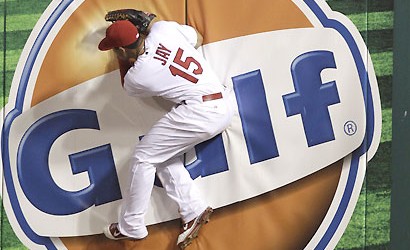 He also moonlights as a Velcro model.

Jay certainly isn’t the flashiest player around, and he still has some room for improvement. He isn’t super fast, but he did steal 20 bases at Memphis in 2009 and 13 in 2010 (without getting caught), but that hasn’t translated to a large number of stolen bases in the majors; this could improve, however, depending on how Matheny manages the run game. He could also improve his plate patience, as he walked just 28 times last season. Still, he’s been a reliable centerfielder the last two seasons, and until the Cardinals acquire a better option, Jay looks to be a fixture in center for the next few years.

Breathe easy, St. Louis. The second base experiment is over.

After a three-year experiment during which Tony moved Jared, a natural outfielder, to second base, it was announced in the off-season that Skip signed with the Cardinals for two more years as a fourth outfielder. I’ve nothing against Skip, but I was never a fan of the move, which was done to keep his bat in the lineup.

2011 was a bounceback season of sorts for Skip, who suffered through a less-than-stellar season at the plate in 2010. He hit better in the field, but his defense was still pretty suspect, and when the Cardinals acquired Furcal, Ryan Theriot was moved over to second base, and Skip was reduced to a bench player. Still, he was invaluable during the NLDS, when he cranked out six hits in ten at-bats and drove in the only run of the game in the series-clincher off Roy Halladay.

Still, in the minds of many, Skip’s claim to fame for 2011 just might be the work of a furry agile rodent.

The Topps first run of Skip's card will feature a squirrel and a small portion of his leg. You can't make this stuff up.

Skip’s best season as a Cardinal came in 2008, his last season as a full-time outfielder, so perhaps the move back will keep him fully invigorated the next two years. There isn’t really a place for Skip to start, so he’ll fill in as a utility outfielder and as an emergency second baseman. He has an above-average arm and could prove to be a solid backup to Jay should he falter.

Who? Exactly. Komatsu isn’t really a prospect, per se. The Cardinals acquired him in the Rule 5 draft from Washington this off-season. What’s that mean? Well, the Cardinals claimed him from Washington’s farm system for $50,000. As a result, he must either stay with the major league team the entire season or he can be offered back to Washington for $25,000.

Because of this, there is a small chance Komatsu could make the Cardinals’ roster with a strong spring training. He faltered a bit last year, particularly in Washington’s farm system, but in 2010, while in the Brewers’ system, he hit .323/.413/.442 at high-A ball. The Cardinals haven’t really had a lot of success in the Rule 5 draft (Brian Barton and Hector Luna were two Cardinals who came to the team as a result), but several All-Stars have had success after being picked (Dan Uggla, Jayson Werth, Shane Victorino, Johan Santana were all Rule 5 picks, as was Hall of Famer Roberto Clemente), and the price is relatively small.