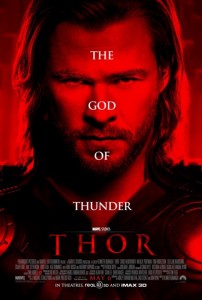 Based on the popular Marvel comic series that started in the 1960s, “Thor” is the first really BIG movie of 2011. With it’s $150 million dollar budget, star-filled cast and plethora of special effects, it is also the most fun you are going to have at the theater this half of the year. And for those of you who aren’t the biggest fans of 3D – don’t worry, it is actually pretty good.

Thor is the son of Odin (Anthony Hopkins) who is king of Asgard. Many years ago, Odin waged war against the Frost Giants who he defeated – taking their source of power called the Casket of Ancient Winters. Fast forward to present day, and the Casket is locked away and guarded by Asgardian guards. On the day that Thor is to be crowned the new king of Asgard, Frost Giants somehow manage to breach their realm and attempt to take back their power source. After their failed attempt, Odin considers the threat defeated – where Thor wants to take vengeance on the Frost Giants. Against his fathers wishes, he secretly travels to Jotunheim to confront their king with his brother Loki (Tom Hiddleston) and closest friends Sif (Jaimie Alexander), Volstagg (Ray Stevenson), Fandral (Joshua Dallas) and Hogun (Tadanobu Asano). When he confronts Laufey, king of the Frost Giants, he is given the chance to leave but his ego gets in the way. Instead of leaving, battle ensues and the pact between the people of Asgard and Jotunheim is broken. Upon returning to Asgard, Odin strips Thor of his godly powers and banishes him to Earth.

What make “Thor” different from most superhero films is that the main character is without his powers for almost the entire movie. It starts out showing us how powerful and awesome Thor is, and then tells the story of how he tries to get his powers back. Interestingly enough, in this case it works quite well. When Thor is exiled to Earth, he lands in the middle of the scientific research Jane Foster (Natalie Portman), Dr. Erik Selvig (Stellan Skarsgard) and Darcy Lewis (Kat Dennings). When they find him, he is talking like a mad man. After Darcy pulls her stun gun on a disoriented Thor, they take him to a hospital where havoc ensues. Meanwhile, Thor’s hammer – known as Mjolnir – has landed in the middle of the desert, where the locals have gathered around to try and pull it from the ground. Reminiscent of the sword in the stone, what follows is a comical series of onlookers who soon are shut down by agent Coulson (Clark Gregg) of S.H.I.E.L.D. When Thor hears about what is going on, he must do what it takes to recover what is rightfully his and regain his powers – as well as spot on the throne.

The special effects and 3D in “Thor” are really good. I am not the hugest fan of the use of 3D in movies. That is actually putting it quite lightly. My personal opinion is that 3D can add a lot of depth to animated films when done right, but often takes away from live action. Well, I was surprised to find that “Thor” is the best use of 3D that I have seen since “Avitar.” Throughout the film, it really wasn’t distracting or too noticeable, which is usually my biggest complaint. Most of the time it was added to give a subtle depth to special effects when the heroes and villains would use their powers. Other times, when scenes on Earth took place, it was hardly noticeable even when taking off the glasses. Everything from the magnificently computer generated city of Asgard to the Frost Giants and other characters that were completely CG were fantastic.

Chris Hemsworth did an incredible job as Thor in the film. The Aussie actor is probably best known as Captain George Kirk in 2009s summer blockbuster Star Trek, in which he only appeared for the first 10 minutes or so of the movie. A lot has changed since then – mainly adding about 20 pounds of muscle to bulk up for the role. Hemsworth appears larger than life on-screen, as the god of thunder should, and is extremely likable in the role. Natalie Portman is great as well, playing scientist Jane Foster and the brainy love interest of the powerless hero. Their relationship starts off rather quirky, and it is fun to watch it evolve as they get to know one another better. Certain interactions between the two like when Thor takes his shirt off are pretty funny. Although it may seem like something straight out of romantic comedy 101, it is fun to watch. Stellan Skarsgard, Kat Dennings, and Clark Gregg are all great in the film. A

“Thor” is a superhero movie that is a lot of fun, and never takes itself too seriously. That seems to be one of the biggest mistakes that most of the comic to movie failures make. With a great cast and a fun storyline, the action is constantly moving and really keeps the audience intrigued. Chris Hemsworth was a great choice for the lead, and is one of the best parts of the movie. The film is one of the most fun to hit theaters this year, and is a great lead in to the summer movie season.

Thor is an A