Review: The Muny ‘Razzle Dazzles’ Audiences With CHICAGO to Close Out 103rd Season 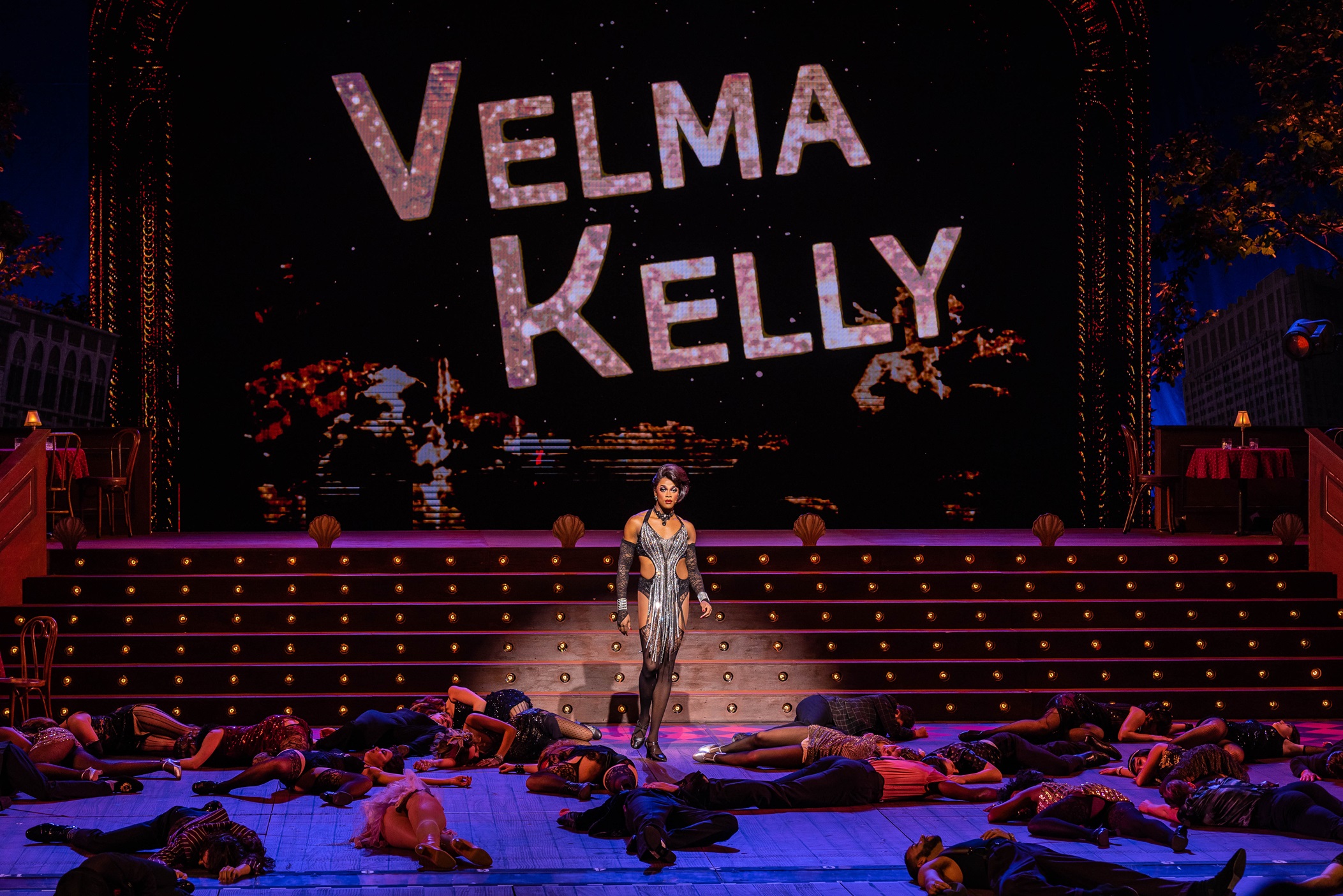 As another tremendous season comes to a close at the oldest outdoor musical theatre in the country, we’re reminded exactly why St. Louis loves The Muny.

Through September 5, audiences can experience the Forest Park theatre’s first production of Chicago in nearly a decade. Filled with dazzling performances, beautiful Prohibition-era costumes, and the sensational songs of Kander and Ebb, it’s a show you simply won’t want to miss.

Set in 1920s Chicago, Roxie Hart (Sarah Bowden) is arrested for the murder of a man she is having an affair with – after her husband Amos (Adam Heller) fails to go along with her cover-up story. Behind bars, she meets Velma Kelly (J. Harrison Ghee), Matron “Mama” Morton (Emily Skinner), and the “Merry Murderesses” of Cook County Jail. Her only hope for salvation is to Billy Flynn (James T. Lane), the “the silver-tongued prince of the courtroom,” who is renowned for his ability to win cases like Roxie’s.

Sarah Bowden is fantastic as Roxie – perfectly capturing the character’s fiery attitude, and naivete when it comes to how serious the situation she has gotten herself into is. Watching her transformation from scorned lover to media sensation is a blast, as the talented actor sings and dances her way into the headlines. You can see how the character’s confidence grows, and Bowden excels at making those subtle shifts in body language that clue the audience into where Roxie’s mindset is.

J. Harrison Ghee is phenomenal as Velma Kelly. It is a role that requires confidence, and the actor absolutely commands the stage whenever they are present. Audiences saw him star in Kinky Boots at The Muny back in 2019, where he was nothing short of magnificent as well. It was great to have him back and killing it as Velma. The energy of “I Can’t Do It Alone” is electric, and Ghee’s rendition of “When Velma Takes The Stand” is spectacular. Also of note was turning “Razzle Dazzle” into its own literal magic show, which was truly impressive.

Speaking of big personalities, Billy Flynn is quite the character – and James T. Lane is nothing short of magnificent in the role. The actor exudes a charm and charisma that leaps off the stage, and mesmerizes the audience just as his character intends to win over the people of Chicago when defending Roxie. “All I Care About” is a number sure to make you smile, and the quickly-paced, tongue-twisting “We Both Reached For The Gun” – a personal favorite of mine – is stellar. You can tell he is having a lot of fun with the role, and we are right there with him!

Both Emily Skinner and Adam Heller have great voices as “Mama” Morton and Amos, respectively. The former will have you believe that she is a woman who can get anything done for the right price, and the latter will truly break your heart. I really enjoyed the chemistry between Skinner and Ghee, as the two of them watch Roxie’s star take flight. Meanwhile, Heller’s “Mr. Cellophane” really connected with the audience, earning him a well-deserved round of applause when he takes his leave near the end of the show.

With a show originally choreographed by Bob Fosse, the dancing is the crown jewel of the show. And Denis Jones does not disappoint when it comes to his direction and choreography. There are numbers that go bigger than I would have expected, pulling the entire cast onto the stage and wowing the crowd with their perfectly synchronized movements. Right from the start, with “All That Jazz” you know you are going to be in for a treat.

The music in Chicago is unforgettable, and the Muny Orchestra lead by Charlie Alterman sounded amazing. The show never quits moving, with one toe-tapping number after another.

The scenic design by Tim Mackabee is wonderful, transforming the stage into a roaring twenties nightclub. And the dazzling costumes designed by Emily Rebholz are sublime – from perfectly cut suits to beautiful sequined flappers. The look and feel of the era come to life as though the audience is being transported back a century in a time machine.

The end of the season is something we never want to happen – but what a way to go out with a bang! The Muny has done it again, crafting their special brand of magic and casting a dazzling spell over St. Louis once again. The music, the dancing, the performances – all spectacular, in a show audiences will never tire of seeing. Counting the days until we meet back in Forest Park for Season 104.

See Chicago now through September 5 at The Muny.