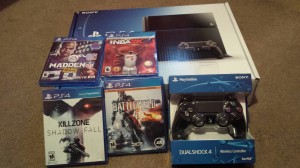 For months now, gamers have waited and waited for the new PlayStation 4 to be released, and if you were not one of the few who pre-ordered you system, you may have been left out in the cold. Luckily, I was fortunate to come across a system for the $400 price tag, so I snagged it up.

Like most, I was anxiously waiting for the Friday release date, and hurried home after work to set up my system. Surprisingly to me, the system set up was quite simple and easy. It only took me about 15-20 minutes to set up my system. I opted to go with my own HDMI chord, although one was provided in the box, along with one controller. I decided to purchase a few games using Amazon’s buy two, get one free offer. Being a huge football fan, Madden 25 was a no brainer for me. I also purchased NBA 2k14, Battlefield 4 and Killzone. None of the titles have disappointed. 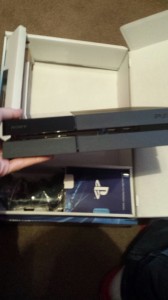 At launch, the PS3 was a very large and heavy system, the PS4 is not anywhere near that. I really  like the sleek look the PS4 has been given. It stands 2 inches tall, 12 inches deep, and just 10 inches wide. Maybe it’s my age, but I could not figure out how to turn the system on at first. The slanted look to the front, may make it difficult for some to figure out. But, once I got an up close and personal look at the front of the system, I noticed the power button, as well as the eject button. After a few minutes of looking at the system and playing with it, I love the look. The PS3 slim version is even bigger than the new generation system. There are two USB 3.0 ports hidden nicely on the front of the system, while the back features the HDMI, Ethernet, optical audio out, and a proprietary socket for the optional PlayStation Camera.

The PlayStation 4 is equipped with a custom processor with eight AMD Jaguar CPU cores, and a next-gen Radeon GPU. It’s based on the ubiquitous x86 architecture, which could make development and upgrades much easier going forward, but it does draw a line in the sand between the PS3 and PS4. PS4 will not play any old PS3 games, so unlike me, you may not want to get rid of your PS3. I decided to use the money I made off my PS3 system and games to buy the PS4. 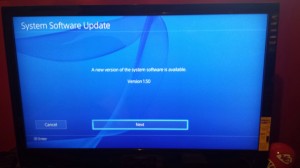 The PS4 also has a 500GB hard drive . While that sounds like a lot, most serious gamers will probably end up upgrading at some point, given some games like Killzone can take up 40GB right off the bat. 8GB of memory and a six-speed Blu-Ray drive makes it faster at loading and installing games than the PS3. In fact, one thing I noticed was how fast games load on the PS4 compared to the PS3. That was one of my few complaints about Sony’s former system.

Make no doubt about it, the PS4 is an incredibly powerful system. It is able to play graphically intensive games up to 1080p at 60 frames per second.  While this will not be the only PS4 design we will see, it’s a drastic change and much needed upgrade over the PS3. For gamers, it’s a must have. 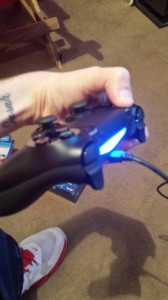 I absolutely love the new controller.

While I didn’t have any qualms about the PS3 controller, the PS4 takes the positive aspects of the former, and adds a bit more to it, making it a very comfortable control to use. The DualShock 4 wireless controller is easily the best gamepad that Sony has ever built. While Sony’s basic controller layout hasn’t changed in 16 years, a number new features, like the colorful light bar up front, and a clickable touchpad up top, make this controller a perfect fit for the new system.  This may be the most comfortable gamepad I have ever held. Sony’s past controllers were designed for a fingertip grip, but the new DualShock 4’s grips fit the entire length of my palms. The texture of the controller features a texture that is grippy, yet not sticky or rough feeling. It’s very comfortable.

Another cool feature about the controller is that is uses a Micro USB port, which enables you to recharge the battery with a smartphone or tablet charger, or you can even use a PC. Probably the most impressive thing about the controller is the 3.5mm headset jack. The included mono headset allows you to use it for voice chat. I did try using a pair of Apple Ear Pods, but those did not work, so I’m not sure if all headsets will work or not. You can also plug a USB headset into the console if using the controller is not your thing. 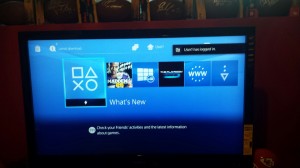 Here’s the thing, I am not a hardcore gamer. I love my sports games and dabble from time to time in shooter games. Other than that, I used my PS3 mainly for Blu Ray movies and Netflix. There is no doubt that the PS3 was the most-watched Netflix device on the planet, so why not add more to the PS4? That is one thing I do not understand about this system, and probably my only complaint. Why scale back on the home theater aspect of the system? At launch of the PS4, there are a dozen media apps. Netflix, Hulu, Amazon, Vudu, Redbox Instant, and Crackle are among the apps you are able to download. There are also apps for the NHL and NBA. All PS4’s come with a built in web browser as well.

While I investigated most of the apps and found them all to work well, the browser still sucks, but just a bit less than the previous version on the PS3. If you have an iPhone or any smartphone, you’re better using that to browse the net. I will say that Netflix looks beautiful with the redesigned platform. Why Sony chose to scale back it’s media content is beyond me. I mean, why take a good thing away? Hopefully, the company will change its tune and decide to make an update on the system so owners can put their pictures and music on it, along with using it for 3D Blu Rays. While the PS3 was touted as a system not just about games, but also media, the PS4 is loud and clear, it’s all about gaming.

So is the System Worth the Price? 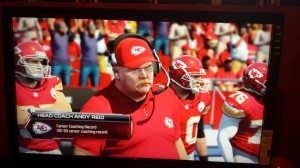 If you look at the PS3 seven years ago, compared to where it is now, it’s a totally different system. I don’t think many imagined it would be where it is now. It started out as a fat piece of equipment that featured a Blu Ray player at a bloated price. That was the big attraction to the system. Now, with the PS4, we know we get the Blu-ray player and improved graphics, but what is the incentive to shell out $400? The selection of games that are out right now do not make the system a must have. If you look at the vast selection of games in the PS3 library, this makes it an even tougher decision. 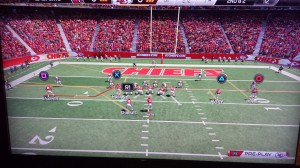 At the present time, I kind of regret selling off my PS3. I miss my NHL 14, although I know that in a few months I will love the improved graphics of the game on the PS4. Like anything else, it will just take time for the system to put out more games. Sony has promised many more games to come, it will just take a little bit. In the end, the PS4 is a beautiful system from the look of the console all the way to the presentation of the games, but it’s not an essential system just yet. If there is a particular game out that is a must have for your right now, then get the system, otherwise, I would wait a few months until the library of games expands.

Overall, I would give the PS4 a solid B. If the library of games available would have been expanded at the release date, it would probably have earned an A.