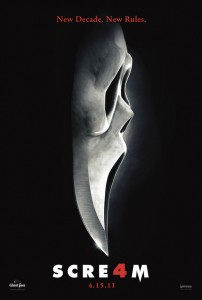 Part of the charm of the Scream series is its own self-awareness. The series is constantly referencing standard horror clichés, and creates the story around the conventions of horror storytelling. The formula worked well for the original film, but the series floundered a bit with the last two sequels.  The films weren’t completely awful (depending on who you ask), but they lacked a lot of the cleverness of the original.

Scream 4 starts us out in a familiar setting, a couple of high school aged girls alone at home get a call from the mysterious “Ghostface”. Bloodshed and murder ensue, and thus we have the beginning of our film, or do we? Scream 4 has one of the most original starts in horror history drawing upon its own backstory and rules. The story really starts when Sidney Prescott (Neve Campbell) makes her triumphant return to Woodsboro as a successful self help author. Sidney reunites with Sheriff Dewey (David Arquette), and his wife Gale Weathers (Courtney Cox) who is no longer enjoying the success in the publishing world Sidney has found.  In addition to the main characters from the other films, a new cast is introduced.  With the return of Sidney, Ghostface also makes a stunning return to form murdering a couple friends of Sidney’s cousin, Jill (Emma Roberts).  Jill and her friends become the new targets in what appears to be a recreation of the events in Woodsboro fifteen years ago. Who is the killer this time and what could be driving them to recreate such a grisly scene?

Scream 4 is everything it intends to be, not to say it is perfect, but it doesn’t really need to be. Scream 4 once again takes the popular formula of horror/slasher flicks, and creates an entirely self-aware experience, one in which you are sure a character will break the fourth wall in. Characters actions are based upon what they shouldn’t do if they are in a horror film, yet ultimately many of them end up making the same mistakes.  It is a bit discerning at times to see how calm many of the characters act in the face of danger. Despite having seen multiple people murdered in front of them, and despite them supposedly being experts on the horror situations; they continue to nonchalantly walk off alone in the dark, and are ultimately surprised when they bite the bullet.

The film boasts an impressive supporting cast, and at times will leave you wondering why a certain actor decided to pick up such a small role in a sequel to a horror film.  Sometimes a large cast can hinder a film, but the large cast is one of the reasons Scream 4 is worth sitting down to watch. It is nice to see a few supporting actors in a horror film that can actually act with some conviction, rather than a brainless bimbo who runs around topless from a Jason-esque killer. (Although, I do have to admit I have enjoyed a few films like this on occasion.)

This is a film that is all going to come down to a few things. Did you like any of the original Scream films? Do you like slasher/horror films? Do you like tongue in cheek gore? If you answered “yes” to at least one of these questions then you’ll probably get a kick out of Scream 4. Don’t expect it to top the original, but it is easily the best of the sequels.