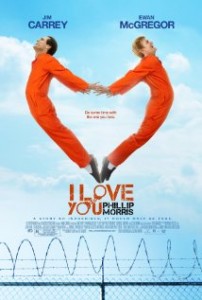 There are few other words in the English language that can sum up “I Love You Phillip Morris” as succinctly as “Wow”. For some that may be a bad “wow”, for others a good “wow’, but for most it will garnish at least a plain old “wow”. “I Love You Phillip Morris” is probably best viewed with as little knowledge going into it as possible. But for those who like to know what they’re getting into…read on.

“I Love You Phillip Morris” is the story of Stephen Russel, played expertly by Jim Carrey. Stephen was adopted as a child, but as we are introduced to him, we see that he has grown into a happily married, well respected police officer. A great life it would seem…except that Stephen also happens to be a gay, sociopathic con-man. Stephen decides to come out and live life to the fullest after a near fatal car accident. After moving to Miami to live the fabulous gay lifestyle, Stephen quickly learns that his expensive tastes exceed the means of his meager salary as a wholesale foods manager. Stephen finds a solution in conning. But it isn’t long before he winds up on the wrong side of the law and meets Phillip Morris in prison.

Now seems to be a good time to clarify that this film has absolutely nothing to do with the cigarette manufacturer of the same name. So if you were looking for a movie about a man that loves his cigarettes, this isn’t your movie. Phillip Morris in this case is just a man, a man played excellently by Ewan McGregor. Phillip and Stephen fall in love and for a time, are able to live the good life. Unfortunately Stephen’s addiction to conning leads to trouble and they are separated again.

What keeps this film from being complete and utter chaos is it’s ability to work on a variety of levels. It works as a comedy, a tragedy and a genuine love story. It also works pretty well as a character study of someone who is likely a much more disturbed individual than the film actually portrays. But the real reason why “wow” is such a great word to describe this movie isn’t just because it works so well, but because it’s a true story. If you’re wondering how much of “I Love You Phillip Morris” is true, look it up, everything that matters is true, if not scaled back.

So if you’re in the mood for something different and you don’t mind foul language, acts of violence or a little gay sex, then check out “I Love You Phillip Morris”