Review: RITA MORENO: JUST A GIRL WHO DECIDED TO GO FOR IT 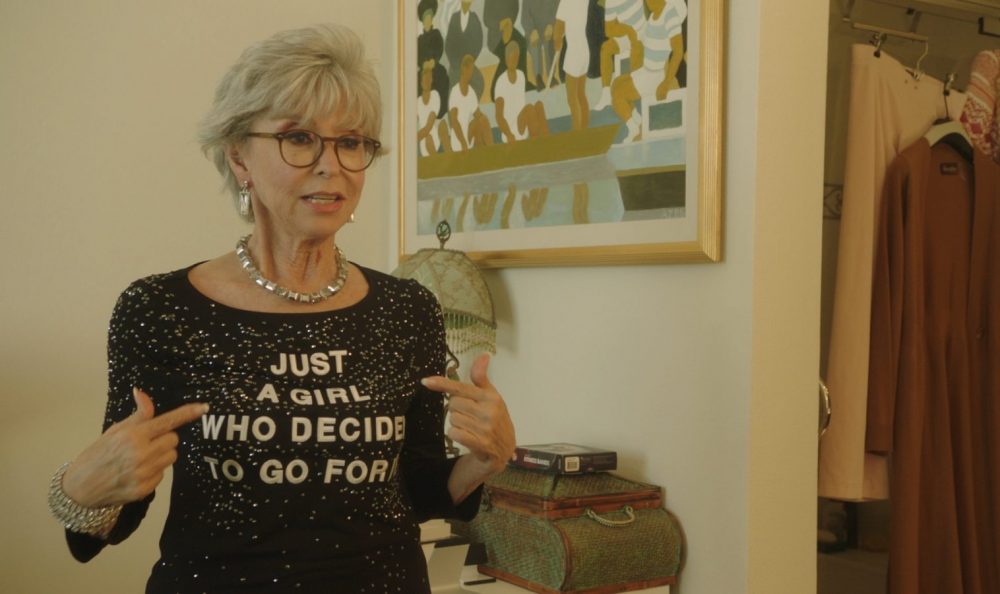 The star of film, stage, television for over 70 years, Rita Moreno still has the energy and charisma you’d expect from someone much younger than 89 years old. But in the new documentary, Rita Moreno: Just a Girl Who Decided to Go For It, we are introduced to a woman who has never slowed down for a minute during her impressive career.

Perhaps best know for her roles in films like West Side Story, The King and I, and Singin’ in the Rain – or her popular role on the recent reboot of Norman Lear’s One Day at a Time on Netflix – the actress provides insight throughout the film about growing up in the business, and how Hollywood viewed her as just the “island girl” in her early career. She regales the audience with tales of meeting with studio heads like MGM’s Louis B. Mayer, who she impressed by dressing up like a “Spanish Elizabeth Taylor” – which landed her a 7 year contract with the studio. But Moreno knew she was destined for much bigger things.

Produced by Lin-Manuel Miranda, and directed by Mariem Pérez Riera (Chamacas, Lovesickness), the film features interviews with several creatives and stars from the entertainment industry. Miranda and Lear make appearances, along with Morgan Freeman (who she worked with on The Electric Factory), Eva Longoria (One Day at a Time), Whoopi Goldberg, Chita Rivera, Gloria Estefan, and many others who respect the star for everything she’s accomplished.

Rita Moreno: Just a Girl Who Decided to Go For It is a wonderful look behind the curtain at a storied career that’s had its fair share of ups and down. The documentary is beautifully assembled with footage from Moreno’s early days and enthusiastic interviews, bookended by the annual celebration of the actor’s birthday. Compelling, heartbreaking, and joyous at times, the film celebrates all she has accomplished – and terrifically shines a light on the road she has paved for generations go come.

Rita Moreno: Just a Girl Who Decided to Go For It is out now in theaters.