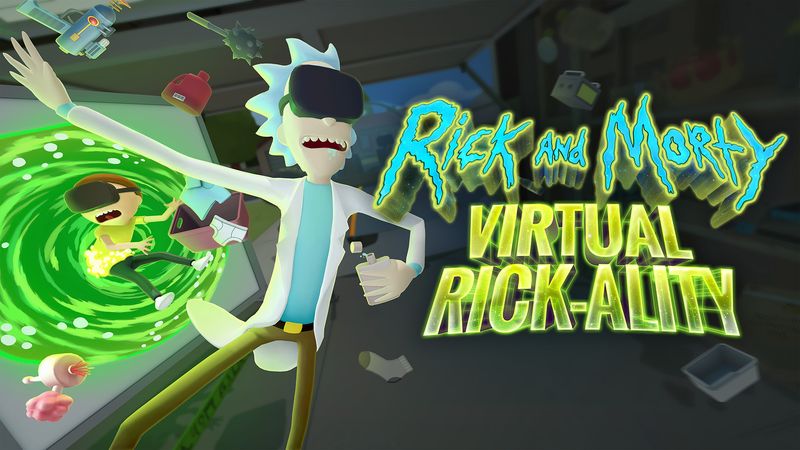 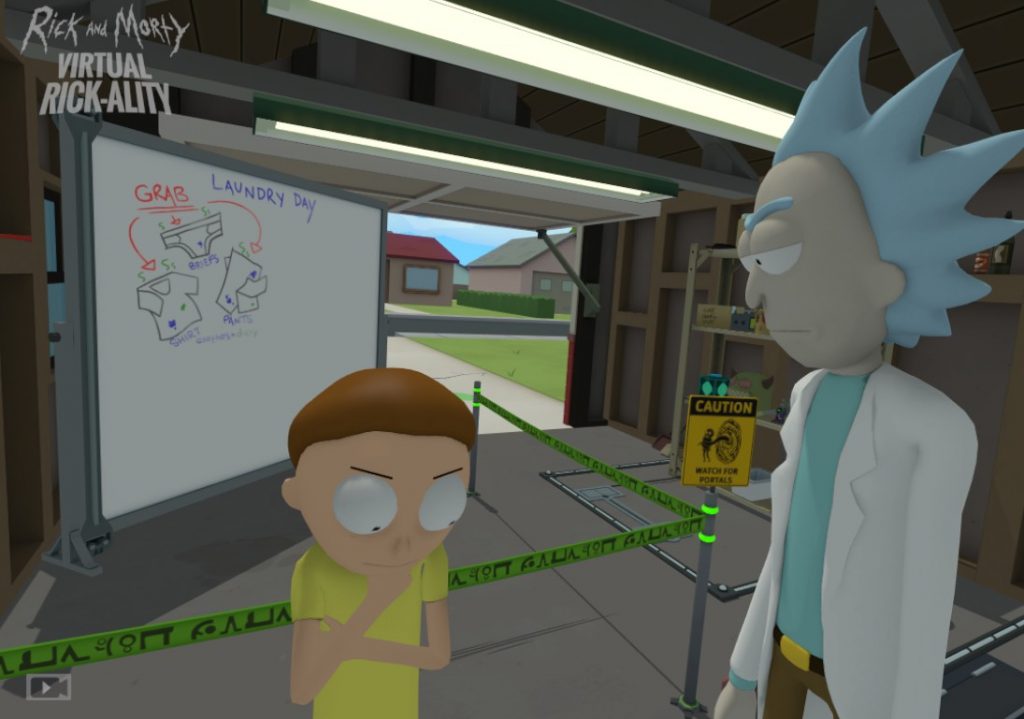 In case you aren’t familiar with it already, Rick and Morty is an animated television series created by Justin Roiland and Dan Harmon. The show first aired on Cartoon Network’s Adult Swim in late 2013. If you haven’t watched it, first things first, start your binge-watching. The first two seasons consist of 21 episodes total, each only 22-23 minutes long, which can all be found on Hulu. That will get you all caught up in time for season 3 this summer – and right away for the new VR game: Virtual Rick-ality.

The game, just like the show, is not for young kids. There’s a reason why Rick and Morty airs on Adult Swim (the episodes are TV-14, with one TV-MA), and the game definitely leans toward the mature side. Now that you’ve been warned, let me tell you how absolutely “squanching” hilarious and fun this new virtual reality experience is.

The game starts out in the Smith family living room, which is neat to see “brought to life” in virtual reality like this. Much like the beginning of Job Simulator (also developed by Owlchemy Labs), this is where you select your simulation – in this case Virtual Rick-ality. You start off with one option, represented by a single DVD on a display (don’t worry, these fill up later), which you select by inserting into the player on the TV stand. Don’t forget to look around before you start, there are plenty of fun Easter eggs right from beginning. 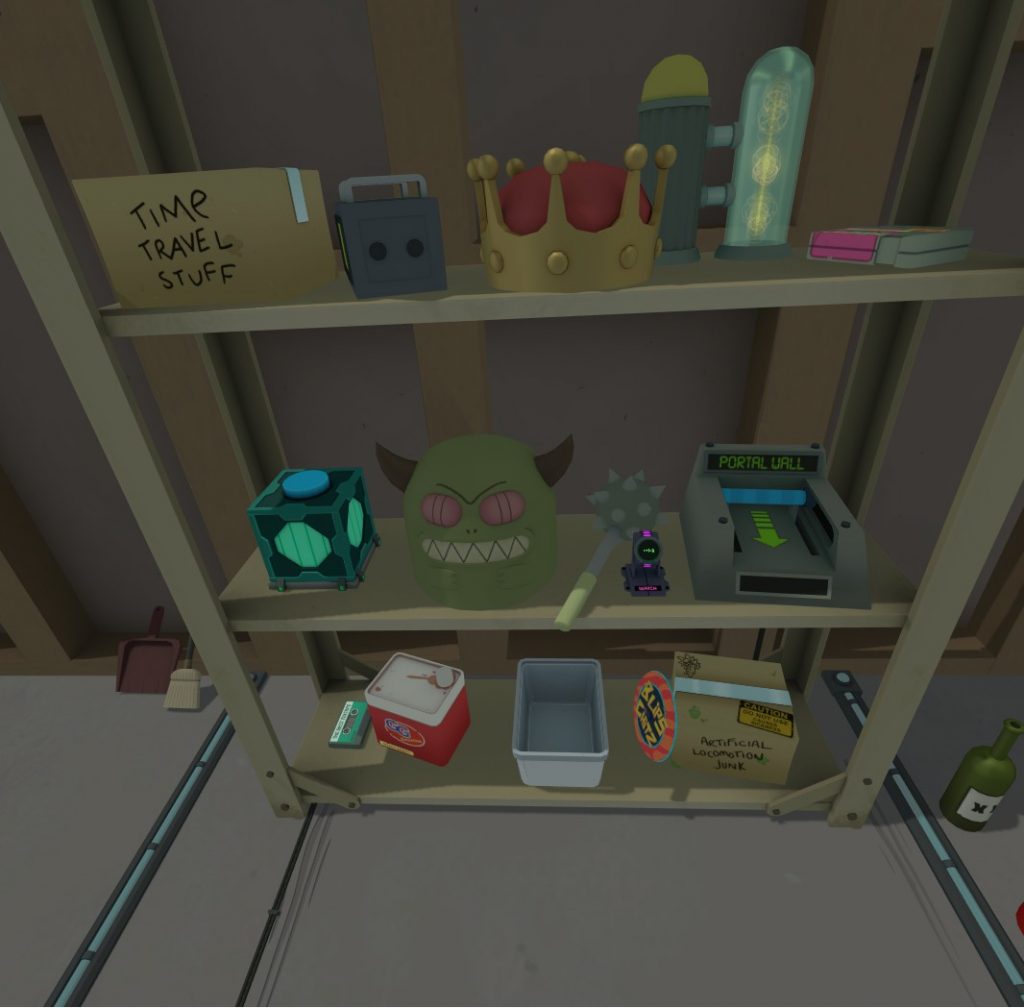 After a short loading screen you are transported into the garage, which is also Rick’s workshop, where much of the game takes place. Here you learn that you are Morty clone created by Rick to help him with a problem he has. He has you do a load of laundry, gives you a quick tutorial on how to move around the garage, and leaves in a hurry with Morty to take care of some stuff that has gotten out of hand. Of course he warns you before leaving not to touch any of his stuff – and so naturally that is exactly what you do next.

Poking around is where the real fun begins, exploring and going through all of the gadgets and alien items straight out of the show. Right away there’s a Mr. Meeseeks Box, a demonic alien containment device, and even a Plumbus. There are too many references from the show to list, which would also spoil the fun of discovering them on your own. Every time I found another item I recognized, it reminded me of how much I love the show. And it was great to be able to actually interact with things that we have only been shown.

Creator Justin Roiland, who voices both Rick and Morty in the series, was closely involved in the creation of this game. He also recorded all of the dialogue for them here.

So the question is: do you have to watch the show to play the game? The answer is, technically no – but you should. The virtual reality experience consists of puzzles, mini-games, shooting challenges, and several other fun VR staples. While all of these are entertaining on their own, the real magic comes from interacting with characters and objects that you recognize. It is clear that the writers and developers put so much care into recreating the world of Rick and Morty, and half of the fun is discovering all of the Easter eggs. Without having seen the series, a lot of the great jokes will go right over your head, and you will miss out on the complete experience. I imagine you could still have fun going in blindly, but it will be a whole lot more fun if you know what you are getting into. This is a game for the fans – and it shows. 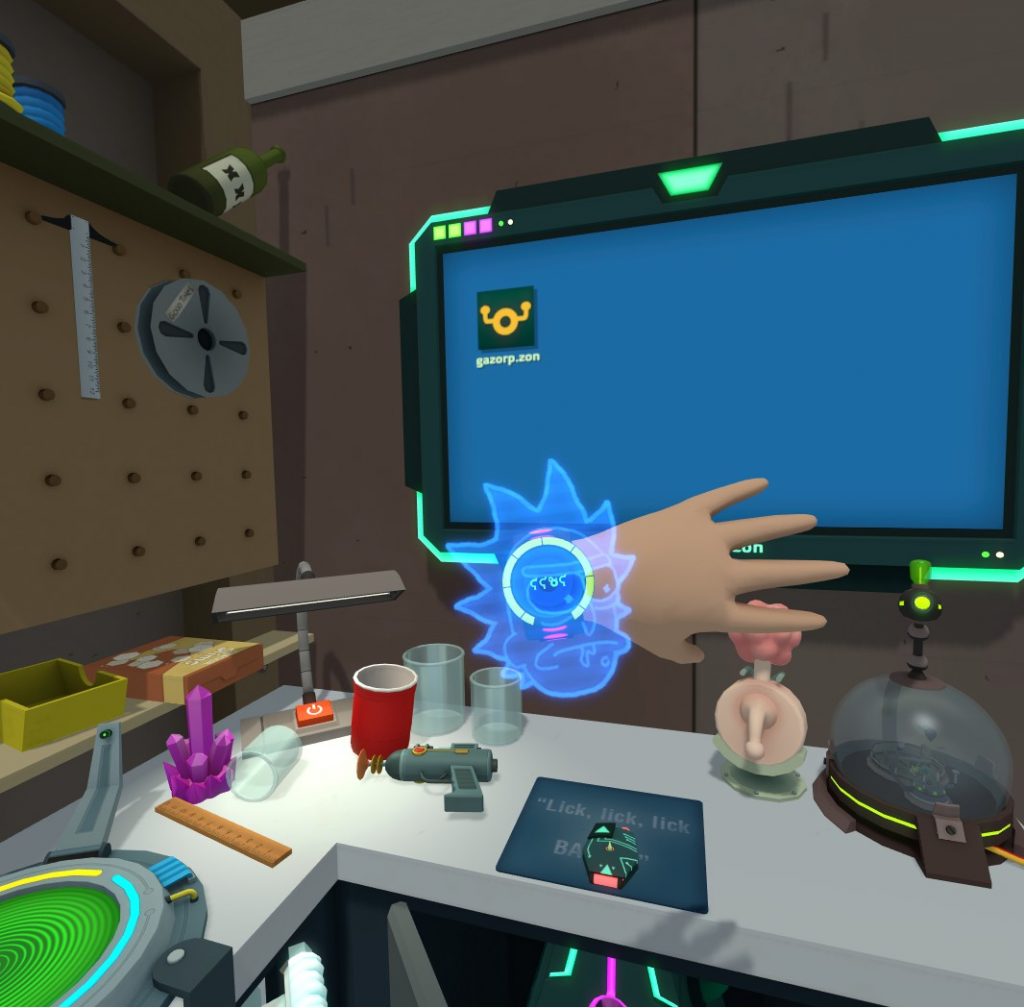 Rick has devised a custom portal gun system to help get you around the garage. You can also spawn a portal wall to three different areas outside of the workshop: a satellite, bathroom, and Planet 840-3GG (where you will face some familiar adversaries from the show). The game makes great use of the virtual reality technology. When a portal opens, you can walk up to it and see everything on the other side. You can reach through and grab things, or throw them from one side to the other. Travelling between worlds is smooth and seamless, and there is never any loading time moving between areas.

You have several resources at your disposal to complete the challenges throughout the game. If you can’t find the object you need laying around, chances are you can order it off Gazorpazorpazon (the shows version of intergalactic Amazon). Rick has conveniently saved Jerry’s credit card to his computer, so no need to worry about money for any of your orders. Next, if you can’t buy it, then build it. Rick has invented a device called a “combinator,” which I’m sure you can use your imagination to figure out what it does. An example provided by the game is: broccoli plus a soda can equals metal broccoli. That is pretty much all the help you get, and then it is up to you to decide what you need to create – and what to combine.

Virtual Rick-ality looks great. The show’s animation is only two-dimensional, but since this is VR, the developers had to give it a 3D face-lift. And while doing so they were able to maintain the charm of the original animation – while adding a lot of detail. It still captures the style that we’ve come to know and love, while looking fantastic in a high-resolution headset.  Seeing all of the familiar sights in 3D for the first time is a really cool experience as a fan, and being able to interact with something we’ve only seen as a cartoon is a lot of fun.

By holding the “Control” key when starting the game, you can edit some basic graphics options. But this is probably something that most people won’t need to mess with. Another neat feature is the spectator mode, which was also available in Job Simulator. By enabling this, you can move a virtual camera around so that observers can see what you are doing outside of the first-person perspective. This is also helpful for live-streaming, or recording playthroughs – making it much easier for everyone else to see the big picture. 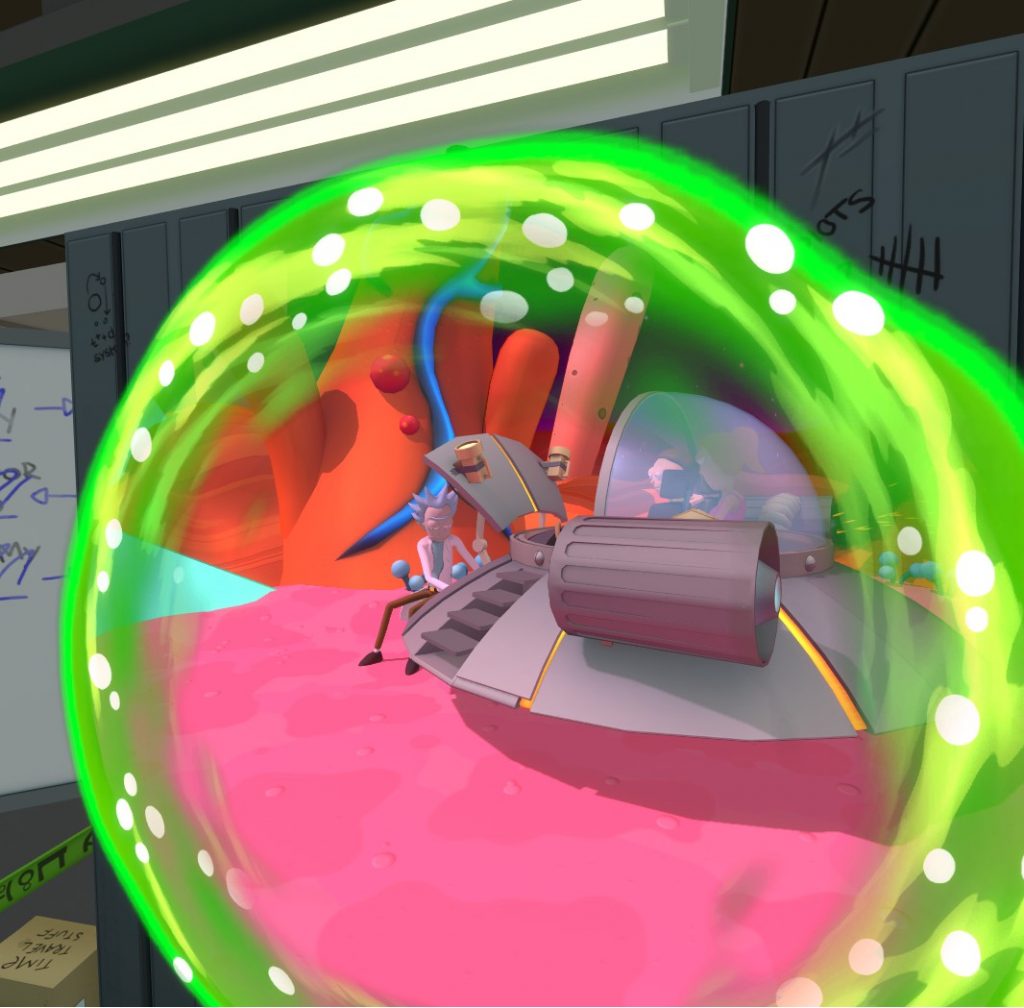 If you have played Job Simulator, the controls of the game will be nothing new. And even if this is your first VR game, the learning curve is very minimal. One thing I’ve loved about the HTC Vive from the beginning is how they developed their controllers to be an extension of your hands. Holding them and pressing the buttons feels so natural, and was a huge selling point over the Oculus Rift at launch. However, that isn’t so much an issue these days, as Oculus has their touch controllers available for $99 – which aim to serve the same purpose. You will need those if you want to play the game with the Rift. 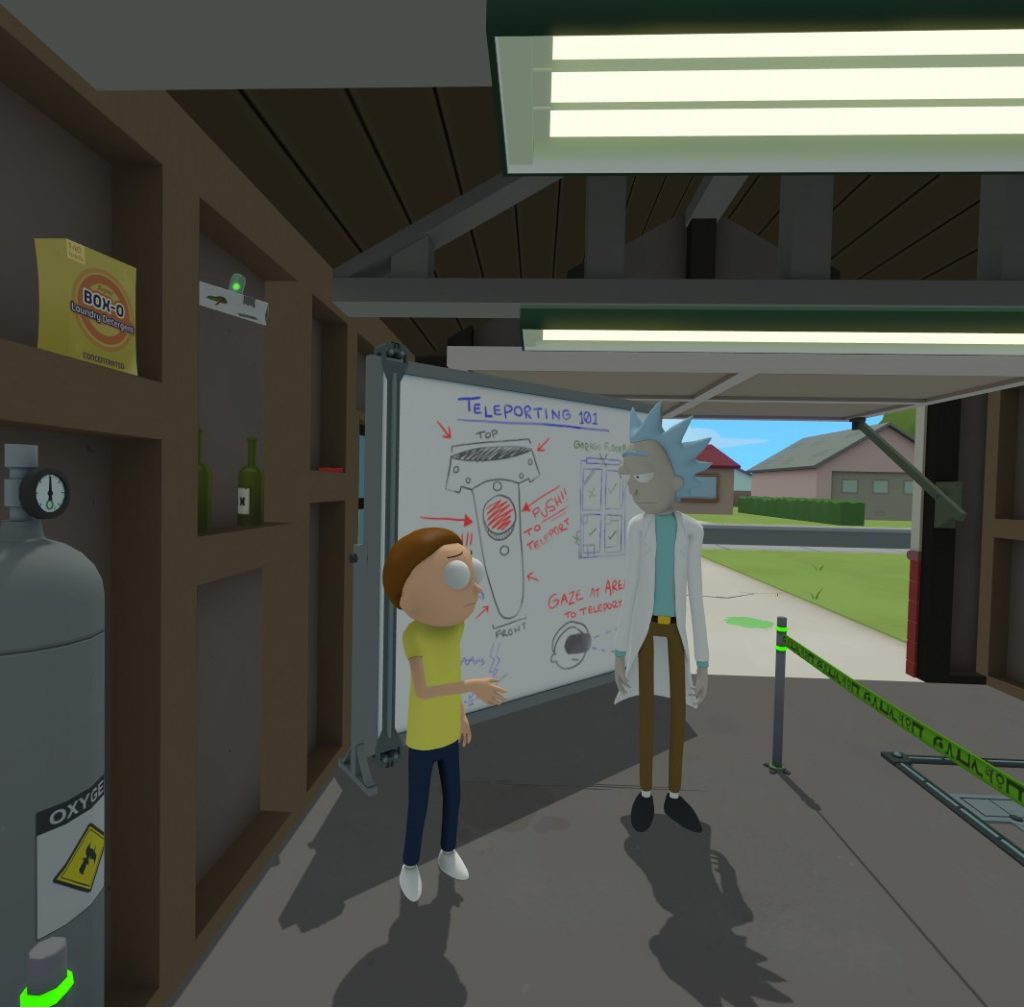 Like other VR simulations, the controllers become your hands, and you use the back triggers to pick up and hold objects. There isn’t much else to it, and there doesn’t need to be. To move around the garage, and outside of your standard play area, all you have to do is press another button and point in the direction you would like to go. There are only a few options, and the game makes it very clear as to what area you are highlighting.

Most of the time you will find yourself picking up objects, or throwing them around. There are also times that you have to click a virtual mouse, turn knobs, press buttons, pull levers, and shoot guns (using the triggers of course). It’s very intuitive, and works extremely well. I didn’t run into any issues during my playthrough. Of course like I mentioned before, the technology has already been perfected for Job Simulator, so this is a very smooth game.

One big problem plaguing VR games as a whole is the amount of play time you get for the price. Many titles are in the $20-$30 range (this one is $29.99), but give you nowhere near the amount of time that, say, a Final Fantasy game might give you. And most have less replay value than game like Call of Duty or Halo that you can play online with friends. With that being said, the developers do a great job with Virtual Rick-ality to give you plenty to do, even after the story is over.

One of the things I love most about VR games like Job Simulator, and now this one, is the freedom to explore and manipulate your surroundings. There is so much to do here, and playing through the main story is just the beginning. The addition of the “Combinator” not only allows you to solve some creative puzzles, but offers hundreds of different objects (if not thousands) to create and have fun with. I started off creating items to solve puzzles, and before I knew it there were over a hundred items laying all over Rick’s workbench. You can combine items to make hybrid objects, shrink them, enlarge them, turn them different colors and give them different uses. And some of them are really funny, in keeping with the humor of the show. 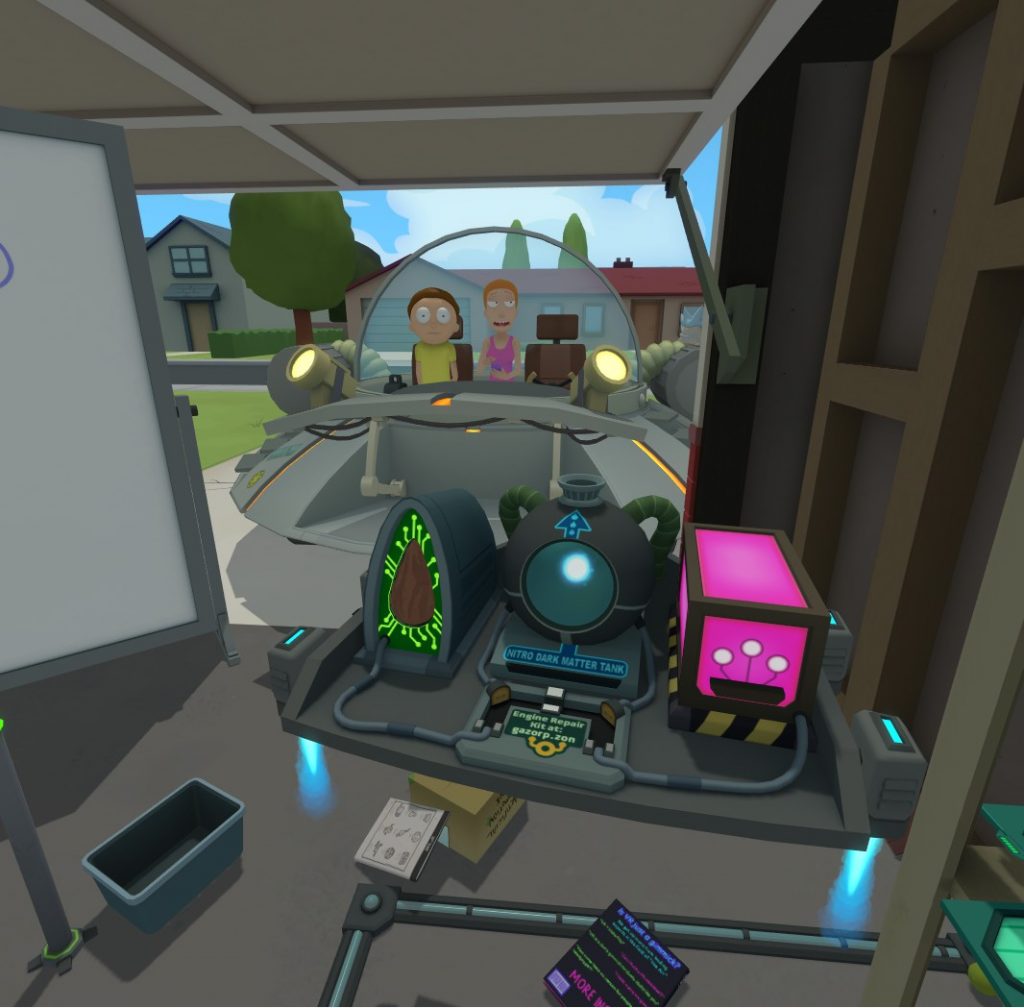 I spent around five hours playing through the story. I have heard people saying that they beat the story in around three hours, but in my opinion you aren’t doing yourself any favors by trying to rush through it. I enjoyed checking out every area, and taking my time to solve all of the puzzle as I went through the story.

At the end of all the story missions, Rick and Morty literally tell you all of the things you can do with the game to keep yourself entertained. There is a mini-game called Troy that you have to play once to get past a certain point, but you can return to it and play it over and over with different outcomes. Then there is a shooting gallery type of game which tracks your high score before you are killed by enemies. After that, there are hidden tapes that you can find and listen to – which fans of the show will love. And there are also mini-games that revolve around charging batteries, which you do by interacting with differnt knobs, buttons and levers. The sequences get faster and more erratic, which becomes a fun challenge to beat your previous high score.

Along with all of the extra challenges I mentioned, I didn’t even count all of the hidden Easter eggs throughout the game there are to find. If you are like me, and can’t wait until the next season starts, this is a great way to get your fix and explore the world in a unique fashion.

If you love Rick and Morty, Virtual Rick-ality is an incredibly fun new way to experience the series. This isn’t something that the developer just licensed to make a quick buck. This is a love letter to one of the funniest and smartest comedies on television right now, and clearly made with fans in mind. Adult Swim Games is the publisher, and therefore has the best interest of their network’s property at heart. And the close involvement of Justin Roiland in not only the voice-over work, but in the creation process, should alleviate any concerns about quality.

If you’re like me, and you can’t wait for season 3 to start this summer (and have watched every episode multiple times), this is a great way to take in a new Rick and Morty adventure and get the most out of your virtual reality setup.

Rick and Morty: Virtual Rick-ality is available now for $29.99 on PC (Steam | Oculus), and compatible with the HTC Vive and Oculus Rift + Touch. For more information, visit AdultSwim.com.