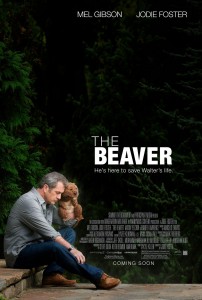 Who would have thought ten years ago that Mel Gibson would have been perfect for a role where his character would have a mental breakdown and start only communicating through a beaver puppet? Well fast forward to 2011, and the glove fits – so you better believe that Gibson wears it proudly in “The Beaver.” Directed by Jodie Foster, the film reminds us that no matter what he does off-screen, Gibson has never forgotten how to act.

Walter Black (Mel Gibson) is a depressed businessman who has grown disconnected from his family. From his work at his father’s toy company who he recently became CEO of, to eating dinner and spending time with his kids and wife, nothing can seem to make Walter happy. Meanwhile Meredith (Jodie Foster) works late nights and does anything to avoid her husband, while their oldest son Porter (Anton Yelchin) makes lists of any similarities between him and his father so that he can lose them. Henry (Riley Thomas Stewart), their youngest, isn’t old enough to understand what is happening when Walter is kicked out of the house – but if nothing changes, it is only a matter of time before he joins the club. On his way back to his car from a stop at the liquor store, Walter finds a beaver hand puppet that has been thrown away. After passing over it at first glance, something oddly compels him to take it back to his hotel room with him. After heavily drinking, and series of failed suicide attempts, Walter wakes up to find himself with the Beaver on his left hand – and it is having conversations with him.

“The Beaver” is a film that is hard to put a label on. It has an unique feeling to it, which definitely works well to it’s advantage. The story is intriguing, keeping you wondering how the main character is going to walk around with a beaver puppet and try to live a normal life for an hour and a half. And the fact is, it is anything but normal. But it works for him. Gibson pulls off a role that would be difficult for many others to make watchable. Maybe it is because of recent events, or perhaps he is just that good of an actor. But either way, his performance as a depressed, troubled person is phenomenal in the movie. Gibson performs sort of a one man show for many scenes, where he is ridiculed and tormented by the beaver – which he is of course voicing and controlling. The interaction between the two is surprisingly entertaining. To take a quote straight from the film, “everyone loves a train-wreck.” But as far as his performance goes, it never derails.

The casting for the picture is great. Jodie Foster does a fantastic job balancing directing as well as playing the wife. Some the scenes felt a little forced, like she was setting herself up for an Oscar at times. But overall, she shows us that she still has it after taking a few years off since her last movie. Anton Yelchin really shines in his role as the eldest son. Beside from Walter’s troubles, the film has a side story which follows him and his high school love interest Norah (Jennifer Lawrence). While Porter is troubled with trying to be anything except for like his father, he is also trying to start a relationship with the school’s valedictorian. Yelchin’s role is an emotional one, and the talented young actor pulls it off with flying colors. The chemistry between him and Lawrence is great, and does a good job offsetting the darker scenes with Gibson.

In the end, “The Beaver” is a unique look into the mind of a person with more troubles than average. The way he deals with them is to wipe the slate clean, and create sort of an alter ego. The fact that it comes in the form of a puppet is extremely intriguing, as well as entertaining. Gibson gives a magnificent performance, and reminds us of why he was considered one of the biggest actors at one time. I think the film will do well based on curiosity at first, but will ultimately succeed based on how surprisingly good it is.