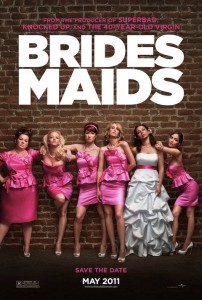 Like any self-respecting pop culture fanatic I have a constant list of predictions on who are set to be big stars. I had been saying for years that Zach Galfianakis would break out, and finally after The Hangover he achieved A-List status that has turned into a cornucopia of roles for the actor. There has been a few that have yet to come to fruition yet, (for example Adam Brody and Topher Grace are two actors who have lots of charisma but never seem to find the right roles) but it appears that one of my predictions might be coming true. Kristen Wiig might have a breakout hit on her hands with her extremely funny turn in the anti-Hangover film, Bridesmaids.

Annie (Kristen Wiig) is a bit down on her luck. Her bakery, the fruit of her experience and passion, has folded recently, and along with it her relationship. She now finds herself stuck in a semi-relationship with the narcissistic Ted (Jon Hamm), the roommate of a socially awkward British brother and sister, and to top it all off doesn’t have many prospects in her future. However, when her best friend, Lillian (Maya Rudolph), gets engaged she immediately finds herself thrust into the position of “Maid of Honor” for the upcoming ceremony. Annie must learn to juggle her already crazy life with the stress of helping plan a wedding with an eccentric band of bridesmaids.

Bridesmaids is easiest to compare to the breakout hit The Hangover, mainly because it involves a wedding, the opposite end of a wedding party, and no holds barred R-Rated comedy.  However, telling the story from the other gender lends it a bit more emotional credibility. Some men might get scared away at the prospect of a comedy with a bit of a heart, but it would be a shame to write off Bridesmaids for it, because it is genuinely hilarious in many instances, and its heart tends to lend a layer that was missing in comedies like The Hangover.

The main source of attraction to the film is its star, Kristen Wiig, who proves she is more than capable of leading a solid blockbuster comedy. Wiig straddles a fine line between caricature and character. She has a gift not only with witty dialogue based comedy, but physical comedy as well. After watching Bridesmaids there won’t be a doubt left in many minds that Wiig is one of the finest female comedians working in the industry today.

Bridesmaids isn’t without its scene stealers. Melissa McCarthy, who rubbed me the wrong way in the trailers, comes through as one of the best characters in the film. What makes the role so great is that with another actress the role might have been more offensive than funny.  Rose Byrne also holds her own well among the women of comedy as more of the straight-(w0)man of the group.  Despite their short appearances Matt Lucas and Rebel Lucas make delightfully awful turns as Annie’s somewhat creepy roommates. Chris O’Dowd is impeccably charming, which seems a bit different than the majority of roles I’ve seen him in the past.

Director Paul Feig is probably best known for his work on Freaks and Geeks, which he co-developed with the now uber-famous Judd Apatow. Feig’s previous offerings on the big screen left a bit to be desired, and its refreshing to see that he can bring the same sense of sentimentality and comedy that he brought to TV.

This isn’t a “chick flick”, Bridesmaids is just a laugh out loud funny film that just about anyone can enjoy.  Expect good word of mouth on the film, and expect to struggle to hear dialogue over gales of laughter from the crowd.