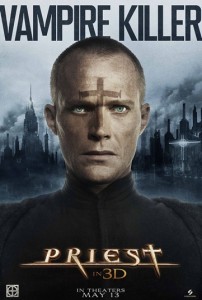 Everything old is new again, or so the saying goes. That’s certainly true in “Priest (in3D).” This Scott Stewart-directed film is littered with references to a host of movies, television shows and books that have come before it, almost to the point of distraction.

I suppose that’s a given, considering “Priest” is based on a Korean comic, which I admittedly haven’t read. But even without that touchpoint, the feeling of, “Haven’t we done this before?” is inescapable.

In a blue-toned, futuristic-yet-westerny world, vampires have been roaming around for ages. The only folks who can push them back during the Great Vampire War are the priests, a divine super-warrior caste who love and-or fear God, jump around a lot and nail you with spiked crosses from 50 feet — imagine a holy water-imbued ninja with Jedi powers. Our title-character priest loses a comrade to the vamps during the war, and though he can’t stop mentally replaying that scene, he returns to life as a discarded veteran behind his city’s Church-enforced walls.

Yep, the Church is the ruler of this land, and all priests have taken vows never to hunt vamps again; why would they, since the vampires are theoretically extinct? Oh, Church, you silly purveyor of lies. When our star priest (who has no name, which is annoying when writing a review) discovers that vampires have slaughtered his family and stolen his niece, he tries to rally the Jedi Masters into starting a new war and saving his kin. The Church, however, denies the vampires’ existence and forbids his request. Thus, yet another priest breaks his holy vows in order to chase after a high schooler.

It’s a neat story, right? Well, it could have been; it didn’t quite realize its potential, though. I was really interested in the Church-as-everything angle, how the film might reflect on what a completely Church- or government-controlled state might be like, and the outside interests that make our leaders look away at just the wrong time. But instead of being truly reflective, this was just a plot pointer so our lead actor could go on his emotional journey.

But wait! It wasn’t even emotional! I just couldn’t connect to Paul Bettany (“The Da Vinci Code,” “A Beautiful Mind”), who played our unnamed hero. Maybe it was because he didn’t actually say much, or maybe it was because he just stared creepily from beneath his hood like Emperor Palpatine. He just didn’t DO a lot for me. I mean, props to him for being a badass and going against Church wishes to make julienne fries out of vamps, but I just didn’t care enough about WHY he was doing it — not even when there was a big revelation about his niece, and not even when there was yet another big revelation about the head vampire. Bettany’s supporting cast of good guys didn’t lend much heart to the film, either. They played their assigned roles in his saga, and that’s about it. Yay for wooden characters!

On top of all of that, though, “Priest” just gave off a constant feeling of rehash. Once the priests were described to the audience, I couldn’t help but think about combining monk and priest traits in the old Final Fantasy Tactics video game. When we were in the vampire hive, it felt like being in the Hellmouth in season seven of “Buffy the Vampire Slayer.” While we were racing around on motorcycles in a deserted world, I thought I was watching “Tron” again. The apocalyptic world that featured characters in Garth Brooks hats brought “Firefly” to mind.” And so freaking much of the whole tale owes such a huge debt to “Star Wars” that I figured Bettany was going to hunt womp rats in addition to vamps.

Don’t even get me started on how pointless it was to make “Priest” in 3D. Seriously. Don’t buck up to give yourself eyestrain when the novelty adds absolutely nothing to this story.

“Priest” could have been cool. Unfortunately, the film’s archbishop went for the most digestible story for the masses instead of offering a revealing, harder look at war and religion. Original sin, indeed.