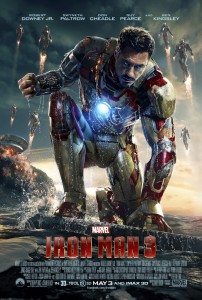 Iron Man 3. This officially marks the beginning of phase 2. For the uninitiated, phase 2 is simply a way of referencing Marvel movies that take place post the events of The Avengers. Iron Man 3 (directed by Shane Black) is the final entry (for now) of a now beloved franchise. For those keeping track, Iron Man and Iron Man 2 were both directed by Jon Favreau. One might wonder if this entry at all feels disjointed in with a change of director for the latest installment. One might think it would be downright disastrous, or at the very least cause some level of uneasiness. I can understand those sentiments, but luckily that is not the case.

Iron Man 3 illustrates a changed Tony Stark (Robert Downey Jr.) dealing with life after such fantastical encounters with gods from another part of the galaxy, the blatantly dramatic invasion from an alien race, and, then there is his having to play nice with others. As it stands, he is trying to adjust to ‘normal life’ with Pepper (Gwenyth Paltrow) looking on as she feels to be his 2nd love compared to the Iron Man armor. A flashback is shown as to introduce a couple of people that had an encounter with Tony, and how their dealing with him set a certain course of events. One of those people being Maya Hansen (Rebecca Hall) who is easy on the eyes, and quite clearly has an intellect that could hold Stark’s attention as she was leading the way in a breakthrough of biological evolution. Also introduced is Aldrich Killian (Guy Pearce), an aspiring scientist with physical frailties, and the genuine manner of what one would call the “stereotypical nerd”. With coming back to the present, nothing seems to be letting up for Mr. Stark as previous choices have come to collect their due.

As seen in the previews, the main thorn in Tony’s side this time around is the villain known as the Mandarin (Ben Kingsley). For anybody even vaguely familiar with Iron Man comics, you would note that he is one of the prime individual’s of the Iron Man rogue gallery. The Mandarin is just as much associated with Iron Man as The Joker is to well…. you know. The trailers demonstrate that he is indeed a powerful and resourceful individual who has no qualms with waging a war against America, and in turn, with Tony Stark. I’ll be the first to mention that the Mandarin in the comic books does indeed have differences from the one presented in Iron Man 3. For the average movie-goer, those differences will be clearly lost on them. However, for the comic readers, those changes that were made will either be ‘just fine’ or they may really bother you. From the perspective of the comic reader, I can attest that I can deal with the changes that they did make. Certainly threw me for a loop. That aside, know that the Mandarin in this interpretation is no less of a threat.

And what about Tony’s buddy James Rhodes (Don Cheadle)? Since we last saw him in Iron Man 2, we saw him leaving a rooftop adjacent to the chaos that ensued post climax of that film. Of course, he made a dramatic exit in the famed War Machine armor. As one would expect, his career as War Mac….er, uhm, Iron Patriot (amusing comic reference and sign of appeasing public relations in context to citizens) has really kicked off. Rhodes is, by definition, the governments ace card to deal with grand national threats. With that said, you see more of Rhodes as he is personally more affected by the events that are transpiring. Tony and Rhodes have that fun dynamic between them that is present in some iterations of the comics. Though, it would almost make sense that a buddy-like relationship would be demonstrated well by someone who say directed Lethal Weapon. Fitting, wouldn’t you say?

Iron Man 3 draws a good deal of inspiration from the comic storyline Iron Man Extemis. Extemis is basically a serum that modifies human DNA as to perform some interesting and seemingly scary feats. As with most comic based movies, Iron Man 3 does not follow Extremis to a tee. That formula seems to work as it pays homage to a well known story arc, while at the same time offering a fresh take to the material so the comic readers don’t know EVERYTHING that is going to happen next. It was a great joy to see some new features of the armor shown on screen as one would see upon reading the comic. Of course the armor has to bring something new to the table with each installment…. it’s Tony Stark.. constantly building and improving tech is a way of life and or allegedly the center of a massive obsession. I’m not here to judge. How many people would react normally to the events of The Avengers? Don’t people prepare for an apocalpyse these days? Though, his preparation is much cooler.

It most certainly would not be an Iron Man movie if it did not have a steady amount of action. Look at it this way, we’ve all seen movies in the past where you have the main narrative being built upon, and character building and interaction, but as the icing on the cake, you get the big pay off towards the latter parts of the film. To be fair, that is in essence how the other Iron Man movies played out. And despite the only heroes in this conflict being Iron Man and Iron Patriot, that by no means dilutes the excitement that comes from the fight sequences. They are quite inventive and a natural evolution to the character’s combat strategy. You will most certainly get the “that was badass!” feeling from the action scenes. No disappointment to be found there in the slightest.

As mentioned in the beginning, Shane Black directed only this entry, and it seems to fit right in with the other two, while acknowledging the events of The Avengers. It certainly has that feel of an Iron Man movie despite not having Favreau behind the lens, though he does reprise his character; Happy Hogan. Overall, it can easily be stated that Iron Man 3 has a slightly darker tone to it, which from a narrative standpoint aligns just right, but isn’t all gloom and doom. No need to fret. The humor is great, as Robert Downey Jr. is natural at delivering witty remarks much to the expense of other characters. Happy Hogan always brings the laughs as well. I still wonder… is he a dude, that’s playing a dude, that’s playing another dude? Plenty should get that reference. One could make the claim of this being the best of the Iron Man movies. Regardless, of the ranking one may assign to this movie as it pertains to the other two *cough* it is certainly better than Iron Man 2, you owe it to yourself to see this movie as it is a nice kick start to a great summer of movies.