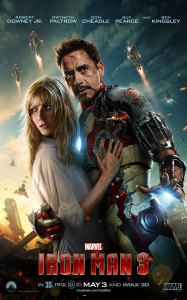 For most fans of comic books and superhero movies in general, it doesn’t get much better than Iron Man. The 2008 film introduced Tony Stark to a world outside of comics, and took the armored Avenger from a third string hero to the A list. The film under the direction of Jon Favreau was the perfect origin story, and set the tone for Marvel films that followed and are yet to come. Iron Man 2 , while lacking the spark that its predecessor had, was still a solid action-packed summer blockbuster. And in The Avengers, Joss Whedon’s superhero masterpiece which earned over $1.5 billion dollars worldwide, there is no doubt that Tony Stark stole the show. Which leads us to the third film in the franchise, Iron Man 3, which is more of a “Tony Stark” movie than an “Iron Man” movie – and there is nothing wrong with that.

We last left Tony Stark (Robert Downey Jr.) after defending New York and the rest of Earth from an alien invasion in The Avengers. While Iron Man saved the day, Stark was left with post traumatic stress – similar to a soldier coming back from war. “Nothing has been the same since New York,” he tells his closest adviser and love interest Pepper Potts (Gwyneth Paltrow) as he struggles to concentrate on anything else but to build new Iron Man suits. He field tested the Mark 7 against Loki and the Chitauri in Avengers, and we now find him putting his finishing touches on the Mark 42.

The film opens with Stark’s mansion and holding cases for his suits being destroyed, blown to pieces by massive explosions. Stark narrates the story, saying it started back in 1999 on New Year’s Eve in Switzerland. It is there with his flavor of the week, botanist Maya Hansen (Rebecca Hall), that he meets an awkward, eccentric researcher named Aldrich Killian (Guy Pearce). Killian tries to get Stark to invest in his group A.I.M. (Advanced Idea Mechanics). Interested in nothing else but going back to his hotel room with Hansen, he toys with Killian and blows him off after agreeing to meet on the roof. It is clear at this point that karma is going to come back and bite him for his actions that night. 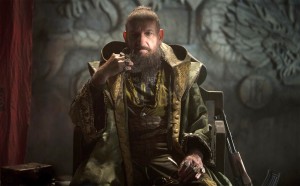 Sir Ben Kingsley as “The Mandarin”

Fast forward to present day, and Pepper is running Stark Industries while Tony suffers from anxiety attacks and nightmares at home. Meanwhile Aldrich Killian has resurfaced in an attempt to give Stark another chance at investing in A.I.M. – and their biological DNA project called extremis. Unlike the character we saw earlier, Killian now resembles the handsome and sophisticated Pearce that we are used to seeing. Happy Hogan (Jon Favreau), who is now the head of security, even catches him trying to put the moves on a bewildered Pepper. But Tony is less concerned by the threat on his love life, when a terrorist group lead by a mysterious figure calling himself The Mandarin (Sir Ben Kingsley) surfaces. When things get personal for Stark, he has no choice but to call out the shadowy figure while putting the lives of those he loves at risk.

While the first two films in the series focus more on action, Iron Man 3 is primarily a character driven film revolving around Tony Stark. And because of how well it was developed by Favreau and portrayed by Robert Downey Jr. in the previous movies, it is pleasure to watch the actor at work. After all, RDJ has stolen every scene he appeared in since his first appearance in Iron Man, so it is no surprise that he can hold his own outside of the armor. Much of the film finds Stark without the suits and gadgets that he depends on during the previous installments, but it is refreshing and compelling to see him without his proverbial crutches.

Just because the film isn’t packed to the brim with non-stop action, doesn’t mean it lacks its fair share. Any lull that may exist during the film is more than made up for in the third act. In fact, once things get started there is hardly room to breath until the end credits. And even though the film features post-conversion 3D, it looked so good that it is hard to believe it wasn’t filmed that way. Being a skeptic of the use of 3D technology in film, it is hard for me to admit that it is the way this film should be seen. But that is my conclusion after watching one of the best uses of 3D I’ve seen in some time. 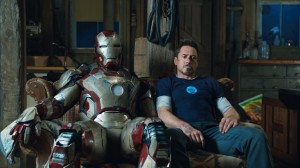 Director Shane Black, who was responsible for reviving Robert Downey Jr.’s career with his film Kiss Kiss Bang Bang, also wrote the screenplay for Iron Man 3. And there is no doubt that the man who wrote this film’s script and Lethal Weapon are one in the same. The same style of writing that made those films so great is responsible for how entertaining Stark’s lines are. Knowing the type of character he is, and the way RDJ portrays him in the Iron Man movies, Black is a perfect match.

The main reason why superhero movies have gotten so good over the past decade is because filmmakers are taking them seriously. And Iron Man 3 is no exception to the rule. While the film is built upon a foundation of action and awesome abilities, it never sacrifices the story or characterization that it takes to make it feel whole. With a fantastic cast, well written script and great special effects, the Iron Man franchise has proven itself once again to rightfully take claim as one of Marvel’s most valuable assets.