C2E2 – A Weekend Review of Chicago Comic and Entertainment Expo 2013

I am sitting on a train heading home from Chicago, and I thought I would take the opportunity to give you my thoughts and news coming out of C2E2 2013.  What a great convention. 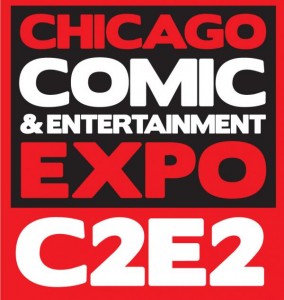 Where most cons nowadays have changed their focus to include both comics and other comic related things (movies, games, and other “geek” related ventures), C2E2 continues to focus on the comic culture.  Sure there are panels with special guests, but almost all of them are comic culture related (with the exception of Jason David Frank and some random Dr. Who folks).  C2E2 is a con for comic fans and the medium we love so much.  Whether you’re a Marvel fan, a DC fan, an Image fan, or just a fan of the culture itself, you will find something you can sink your teeth into at the show. If you’re looking for some back issues to fill out your collection, there are rows upon rows of vendors who are more than willing to help you find what you’re looking for. Maybe you’d like to get some of your comics signed by your favorite creators.  C2E2 has got you covered.  The show has one of the largest “Artist Alleys” on the convention circuit. C2E2 is quickly becoming “the” con to attend in the Chicago area (eclipsing the mighty Wizard World Chicago).  Before I get into my thoughts on the show, lets get to the news that came out if the show itself.

I’m going to run down the news with quick bullet points and in no particular order.

Check out the gallery below for all of the promo images: