Review: MAMMA MIA! Delights Audiences One Last Time at the Fox After 15 Years 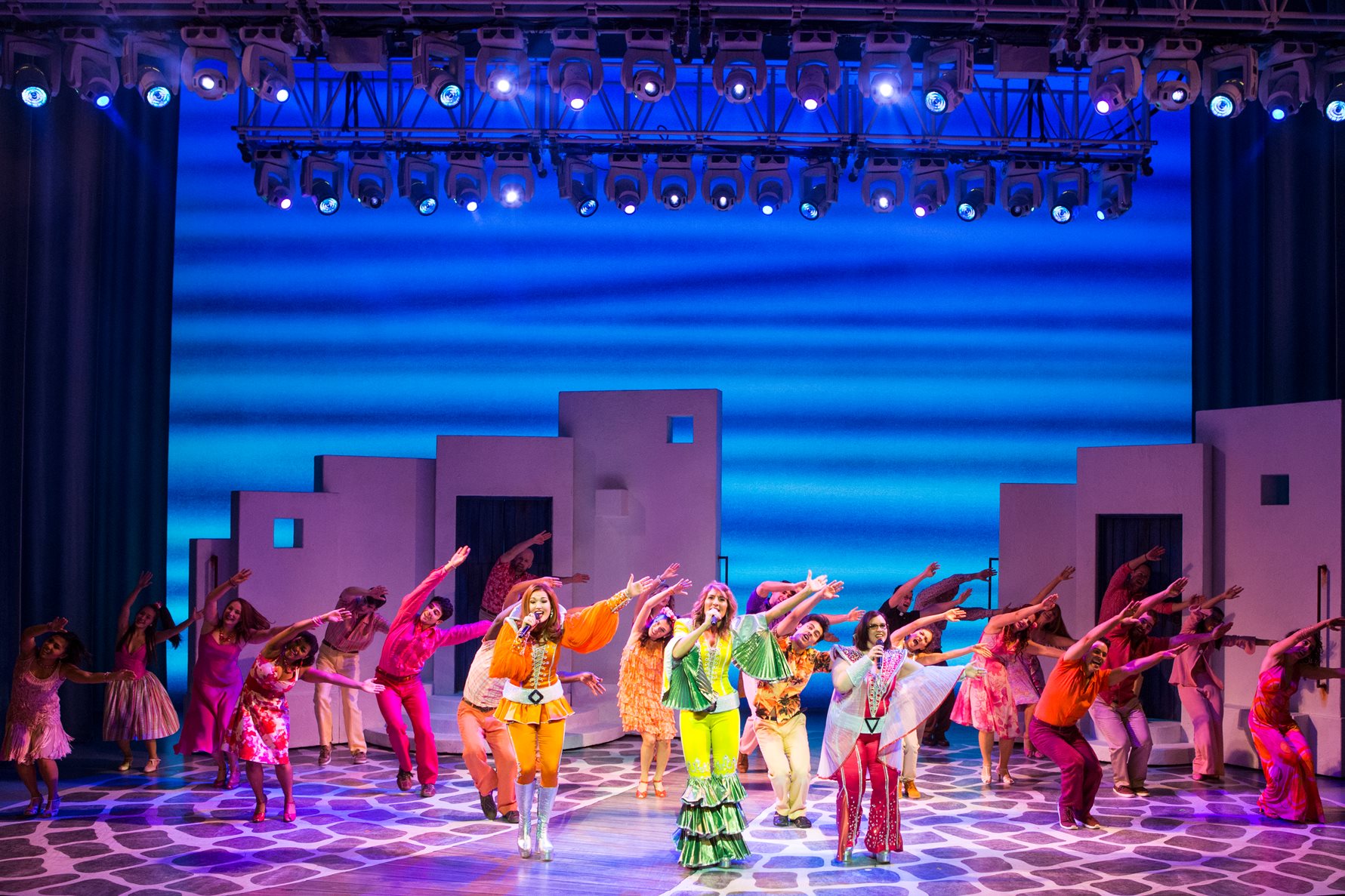 The farewell tour bids goodbye to St. Louis this weekend.

It is no surprise that the Fabulous Fox was packed Friday for opening night of Mamma Mia!. After all, St. Louis and the Fox have hosted the show more than any other city in the United States during its fifteen year tour. And like the energetic show, the audience never missed a beat – as they were mouthing the lyrics and dancing along from start to finish.

20-year-old Sophie (LIZZIE MARKSON) is getting married, and wants her father to walk her down the aisle on her big day. The only problem is she doesn’t know who he is. After finding her mother Donna’s (BETSY PADAMONSKY) diary from the year before she was born, she narrows it down to three possible men: Sam Carmichael (SHAI YAMMANEE), Bill Austin (MARC CORNES) and Harry Bright (ANDREW TEBO). Without her mother knowing, Sophie invites all three of the men to the wedding – hoping that she will instantly recognize her father. The day before the wedding, Donna is making last minute preparations with her best friends and former band-mates – Tanya (CASHELLE BUTLER) and Rosie (SARAH SMITH) – when the unexpected guests arrive. What follows is a hilarious romantic comedy of sorts, told by the incredible songs of ABBA. 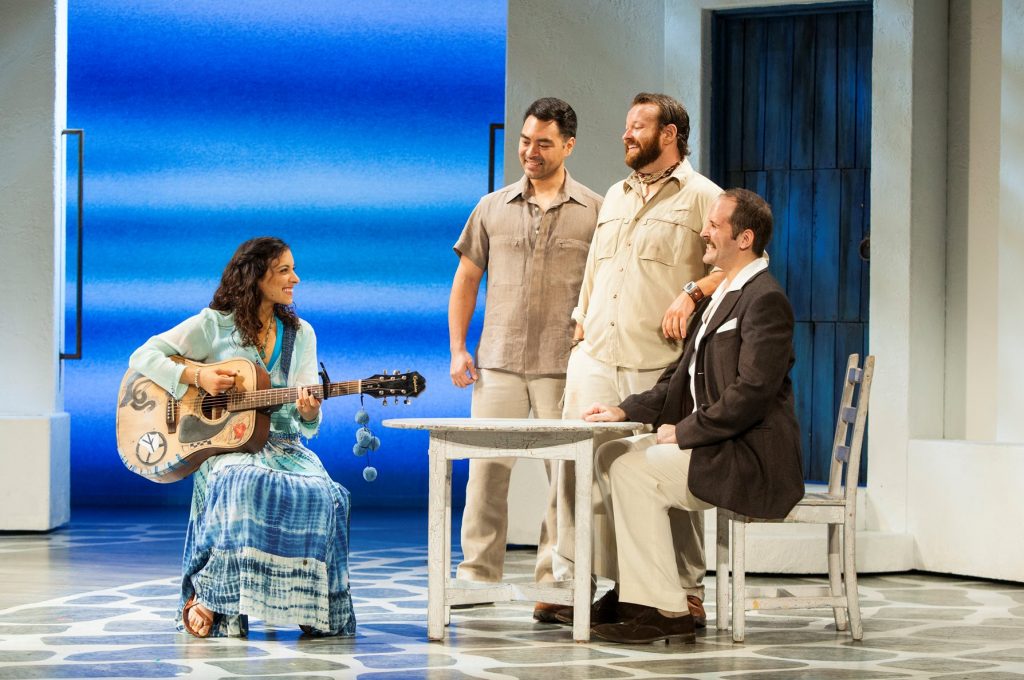 Having seen Mamma Mia! more than any other musical, I can tell you first hand that it is one of the most fun shows you can experience at the theatre. Packed full of iconic songs, you can’t help but to realize just how prolific ABBA was in the ’70s and ’80s. Even if you didn’t grow up when the music was released, you will recognize the non-stop hits. The way that creator Judy Craymer crafted the show around the iconic music, along with writer Catherine Johnson, is brilliant. There is no question as to why the show is the eighth longest running in Broadway history, and has been seen by more than sixty-million people worldwide.

The entire cast is fantastic, in what is one of the best productions of the show I have ever seen. Both Markson and Padamonsky, who take most of the spotlight with their mother / daughter dynamic, have phenomenal voices. The actors have great chemistry on-stage, as their relationship is tested and triumphs through an important time full of life-changing memories.

The roles of Tanya and Rosie are always fan-favorites, and provide many of the laughs throughout the evening. Butler and Smith had the crowded auditorium erupting with laughter throughout the performance, and truly shined in the beloved roles. 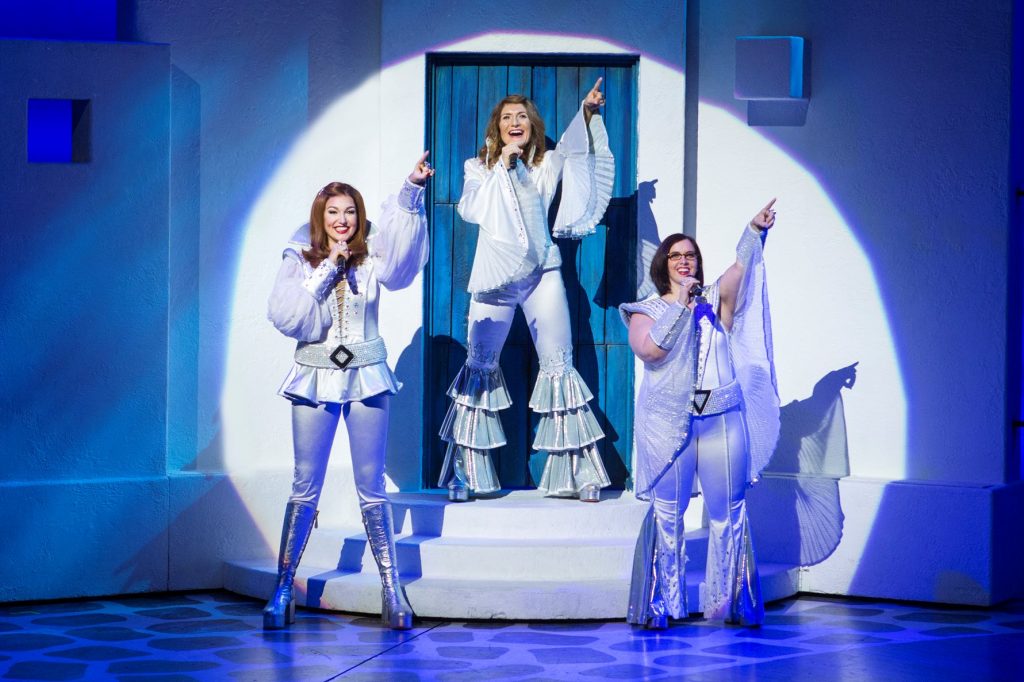 Following suit with the rest of the cast, the three would-be-dads are fantastic as they navigate the waters of their characters’ past relationships with Donna. The three actors captured the spirit of the roles perfectly, as they blended a mix of comedy and sincerity that audiences have come to love.

Full of iconic music, Mamma Mia! is a blend of pop hits and emotional ballads that audiences young and old can appreciate. From the moment the show starts with “Honey, Honey” you know you are in for fun, while “Money, Money, Money” showcases the depth and vocal abilities that are in store. And it isn’t long before “Thank You for the Music” shows you how much heart the show has. There are so many great songs, like “Dancing Queen,” “Super Trouper,” and “Gimme! Gimme! Gimme!,” that make it feel like more concert than musical – which is an incredible experience. And that is only ACT I.

Whether you love ABBA, are a fan of musicals, or are just looking for a fun night out – Mamma Mia! has it all. No matter if this is your first time, or tenth, do yourself a favor and see this spectacularly entertaining show during its final stop in St. Louis.