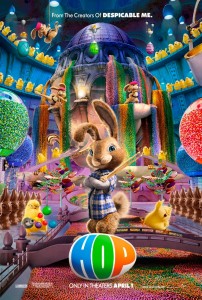 The commercials scream, “From the makers of Despicable Me” and justifiably so. Despicable Me was the surprise hit of the summer – charming, funny and delightfully unexpected. Sadly, Hop is none of that. Russell Brand stars as the voice of E.B., Easter bunny in waiting. But what E.B. really wants is to be a drummer so, much to the disappointment of his father and current Easter bunny, he steals away under cover of darkness to seek out his dream. Upon arrival in the real world he’s taken in by Fred O’Hare (James Marsden) who has daddy issues of his own. Fred is unemployed, living with his parents, completely directionless and chafing at his parents rapidly dissipating patience.

As holiday-themed kid flicks go, Easter seems ripe for the taking. Christmas gets all the attention and Halloween has had more than its share of Hollywood’s love. Hell, even Groundhog Day has managed to muster a cinematic masterpiece. But Easter, despite having a cute fluffy bunny for a mascot, has never received much focus from children’s films. Perhaps we just haven’t secularized it enough. Whatever the reason Hop makes a valiant effort at rectifying this neglect and is successful in fits and starts. In fact, the film is at its best when it remains focused on Easter. Whether it be showing us how candy is made, teaching us about the succession of Easter Bunnies or detailing the envy chicks have towards bunnies, the film excels when it deepens the mythology of the holiday.

And then there’s James Marsden. The film comes to a screeching halt every time he comes on screen. His character, while designed to be sympathetic, is anything but. When his father (Gary Cole) ticks off his son’s character flaws it’s a moment of parental bullying that the filmmakers intend to engender sympathy. However, it has the exact opposite effect only serving to show us just how unlikable of a character he actually is. Unlike E.B., who dreams of being a drummer, Fred is a dreamer without a dream. He has disdain for “regular” jobs but has nothing to replace them with. He has no greater goal other than not wanting a 9 to 5 job. Well join the club, buddy.

The character designs are cute but the mixture of animation with live action never quite gels. It’s been over 20 years since Who Framed Roger Rabbit but it remains unequaled in that area. And while it’s probably not fair to expect the film to match its achievements, Hop leaves you longing for the subtle complexities of Alvin and the Chipmunks.