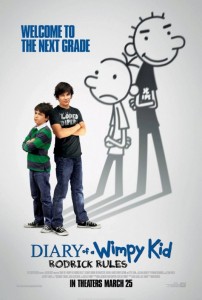 Greg Heffley (Zachary Gordon) returns as our eponymous hero in Diary of a Wimpy Kid: Rodrick Rules. This time out he and his best friend Rowley (Robert Capron) have moved up the food chain of middle school by entering the 7th grade. However the filmmakers have shifted their focus from Greg’s relationship with Rowley to his relationship with his brother Rodrick (Devon Bostick). Rodrick, age 16, is the drummer in a rock band, has no time or patience for his little brother and has made a cottage industry out of tormenting him.

The first film revolved around Greg’s cutthroat quest for popularity at his new school as he repeatedly subjected Rowley to rejection and humiliation in a futile attempt to climb the social ladder. Greg was frequently embarrassed by his friend’s immaturity and complete and utter disregard for public opinion. Ironically it was this same lack of concern that led to his popularity. However, this installment has mistakenly relegated Rowley to the background. Let’s face it, Greg’s middle-school machinations are borderline sociopathic and it was Rowley who humanized the wimpy kid as both a character and as a film. But transferring emphasis to Rodrick is a major miscalculation. The siblings are too similar and as the two continuously attempt to outdo each other it becomes increasingly difficult to know who to root for, let alone care.

While the mean streak of the first film is reigned in, it is still present. Sadly, the same can be said about the lessons learned. Much of the original’s charm came from those lessons and the film’s willingness to treat the stress of middle school seriously. But this incarnation is much broader (which is saying something considering the source material), less grounded and, quite frankly, not as funny.