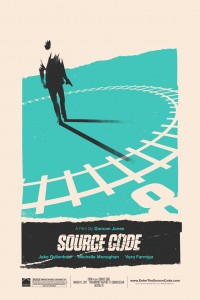 Source Code is a fun and gripping ride that will throw some in the end but after some mulling over I think the film works in almost every capacity.

The film is a sci-fi picture that presupposes that the government has created a program, called source code, which will allow them to send someone into the last 8 minutes of the recently deceased life.  I am sure you could imagine a lot of scenarios they could use this for but the government is using it to attempt to stop terrorism.  A train has blown up on its way to Chicago and is a warning for a planned attack on the city as a whole.  The government uses source code to send in Captain Colter Stevens to attempt to find any clues that will allow them to find out who is behind the train and future terrorist attacks.  The catch is that Stevens is sent into the body of the person they are using the source code on and he must deal with anything going on surrounding him on the train.  In this instance it is a girl, Christina, who becomes both an obstacle and a distraction for Stevens as he tries to find the bomber.

The film uses its repetitive premise to have plenty of fun and Duncan Jones builds up the suspense well as Stevens tries to get to the bottom of the bombing.  The humor is also strong throughout as the receptiveness and Stevens growing knowledge of the train allows from him to pull a fast one on more than one occasion on unsuspecting commuters.

That said, I think they could have had a lot more fun with the premise.  There were a lot of ideas that could have been further explored or experimented with more.  What happens if Colter gets off the train, they touch on this the most but there was more there, especially with the idea of course correction that the film seems to allude too. Or how about the effects the source code has on Colter’s mind, can it hurt or affect him in any way?  Colter’s knowledge of the train and what happens is also ripe for humor, action, and fun that are left completely unexplored.  They do a couple things at the start of the eight minutes but nothing else much beyond that.  Another complaint I have is the film seems to take a really long time to unfold, especially after a montage that implies a number of failed attempts.  At 8 minutes at a time that is many hours passing and they make it seem like they have potentially minutes to find the bomber.  Thankfully the film’s pacing isn’t sacrificed, it moves at a blistering pace, but a lot of time seems to pass when it shouldn’t over the course of the film.  To continue with compliments, Jones’ film is a fast paced and very fun detective story that uses its sci-fi elements to great effect.  The third act of the picture seems to throw away the stakes for its finale, but thankfully Jones’ brings it around in the end otherwise he might have spoiled a very good thing.

The acting in the film is shoulder mostly by four individuals and they all do their job just fine.  Jake Gyllenhaal stars as Colter and he is as fun and charismatic as needed.  That said, I think he does come across a tad too cheesy on an occasion or two but that is more or less forgivable.  Michelle Monaghan keeps Christina compelling and interesting despite being stuck with the same lines and unchanging character as she is reset every time Colter enters the source code.  Jeffery Wright is also great as always as the creator of source code who you can never really trust.  Vera Farmiga grounds the film as being the viewer’s eyes in the picture as she builds sympathy for Colter as they push him time and time again into the source code.  The two are able to have some poignant moments while never being in the same room and I think that is an accomplishment to be praised.

In the end, Source Code is a very enjoyable film that has to be chewed on to make sure everything works.  The film’s third act can’t be discussed without getting spoilery but it is bound to throw many for a loop.  All in all, I think it works though and throws a couple of potentially dark and sad twists into the ending depending on your interpretation of what went down.  The film is a solid follow up for Duncan Jones though doesn’t come close to the heights of his first effort, Moon.  Regardless it is a smart popcorn flick that is as smart as it thinks it is in the end.

Source Code is a B+