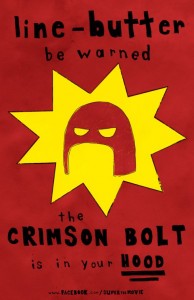 Super is the latest from James Gunn and the result is a bizarre, violent, and funny take on the super hero genre that falls in line with Kick-Ass and Watchmen of recent years.

A subversion of the comic book film, this is probably the most realistic take on what having a masked avenger running around would really be like in reality.  Seattle has a couple of masks running around town in real life right now, and Crimson Bolt feels like he could fit right in with them.  Married to an ex-drugged out stripper, it was only a matter of time before Frank’s wife slipped back to her old ways, pushed along by a smalltime mob criminal type Jacques.  Frank decides to get her back as he sees her being manipulated and used along the way and he does so by adopting a crime fighting persona, The Crimson Bolt.

While the film might seem like a Kick-Ass rip off, it definitely blazes its own path.  The film is raw, bizarre, and pulls no punches along the way.  The characters that inhabit this world are unique and relish violence, not that there’s anything wrong with that, and you will see people gleefully enjoy the pain of others.  What makes that last sentence even weirder is that Frank may or may not be on a mission from God; might just be schizophrenic. Regardless of what is sending and driving Frank forward, it sends its messages in a weird and bizarre ways.

The humor in the film is deftly balanced with sadness and high stakes action as people will and can get hurt/die in this world.  Like I said before, this film operates in the real world and the consequences that come with that.  No one is pulling off super-humanish stuff in a grounded reality, i.e. Hit-Girl, bullets take lives, wrench’s split heads, and characters clumsily take on one another.  The plights Frank will fight for range from the noble, like his wife, to the stupid, line butting and the film plays up the whole range for a multitude of emotions.  The film does lull a bit here and there but I think it more than makes up for any downbeats as it nails the final act.

Those with an easily upset stomach are being warned though as the film is brutal and graphically violent from time to time.  Gunn doesn’t shy away from some brutal encounters and lets some of his characters take glee in the carnage.  In fact, Boltie is one of the sweetest and sadistic characters to come along in some time.  Ellen Page is great in the ADD role of Libby/Boltie as she curses, seduces, and manically fights crime.  The character is a fun one and I can see why she jumped into the role.

Gunn actually assembled quite the cast for the film and it is lead wonderfully by Rainn Wilson.  For those that only know him as Dwight, and that is most of you, check out Super to see Wilson’s range and abilities.  Whether he is going toe to toe with an innocent woman or a roughian mob type, he doesn’t falter; that is unless they got a gun and he doesn’t.  Watching Frank evolve as a crime fighter is great stuff but he grows internally as well and Wilson nails it.  He even nails the physicality of the role.  Kevin Bacon is great as Jacques and achieves a comedic twist to a really nasty individual.  Liv Tyler and Nathan Fillion both have limited roles but make the most of them, with Fillion getting to have a lot of fun as a Christian superhero.  Tyler unfortunately is stuck in a dazed haze for a majority of the film, but when the character is allowed to lighten up she is sweet as ever.

In the end, Super is a fine little small budget effort that has a lot to say about the genre.  The film’s reality is close to our own and the grounded nature raises the stakes and elevates Crimson Bolt’s challenges.  The film’s third act is perfect and isn’t afraid to break off what you think will happen.  Bold and brutal, Super isn’t for everyone, but if you are up for something different, even for the superhero genre, then I think you will find a lot of fun in Super.

Super is a B