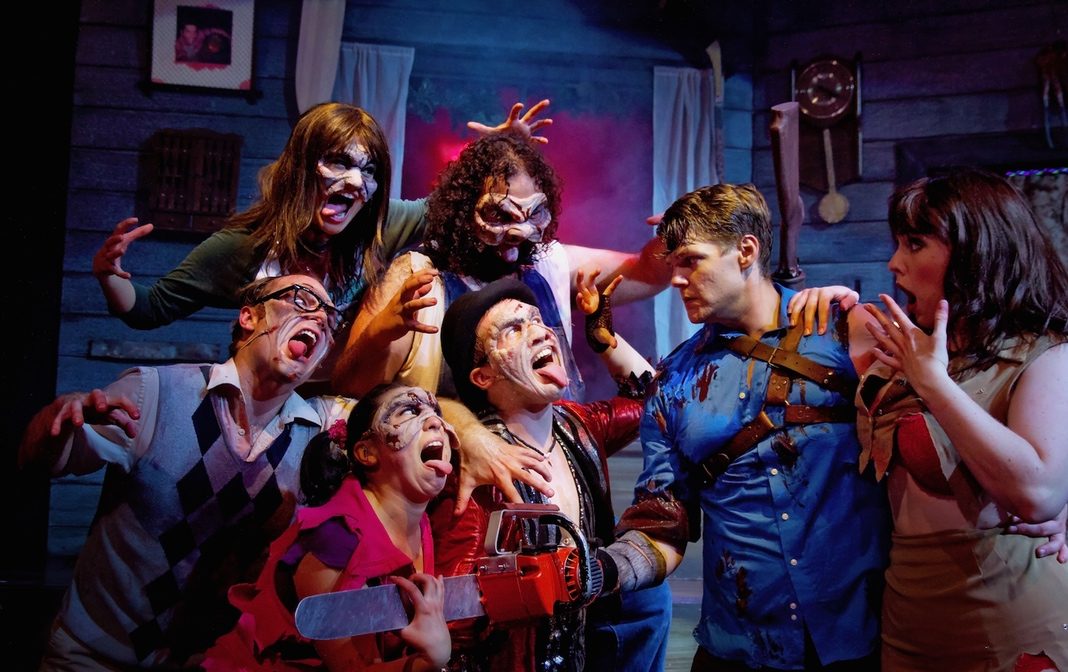 In my early years of teenhood, I was beginning to develop an appreciation for the horror genre. Considering myself a late bloomer, my interests looked past any of the modern Blumhouse productions and more toward the gritty, gory, unadulterated classics that not even my own parents could stomach. Thus, the film that really changed it all for me was 1981’s The Evil Dead, the iconic, low-budget “video nasty” that rocketed B-movie king Bruce Campbell to cult stardom and brought future Spider-Man director Sam Raimi to a status of legendary infamy, but not without getting the film banned in a few countries along the way.

Read our interview with creator and original director of Evil Dead The Musical Christopher Bond.

Evil Dead is not a flawless movie in my eyes, and probably not in the eyes of many others either, but my love for it is unprecedented within the horror genre. Within hours of first seeing it, I wanted to learn more about its history and the legacy it has led. Through my research, I discovered that the film was adapted into a live musical comedy in 2006 by George Reinblatt, borrowing elements from its 1987 sequel, Evil Dead 2: Dead by Dawn, and 1992 third installment Army of Darkness. My initial reaction was assuming that idea was either really good or really bad, but, as a newly formed “Deadite,” I was nonetheless intrigued. However, never had I imagined that I would one day witness the hilarious, immersive insanity that is Evil Dead: The Musical on stage, until I had the pleasure of attending the 2017 tour’s opening night at The Grandel Theatre in St. Louis, Missouri.

The show begins with the introduction, through a bright and upbeat song and dance routine, of Ash Williams (played by Trent Mills, filling the shoes of the heroic role originated by Campbell) accompanied by his lovely girlfriend Linda (Michelle Nash), his man-child best friend Scotty (Christopher Fulton), Scotty’s dimwitted girlfriend Shelley (Merritt Crews) and Ash’s nervous sister, Cheryl (Saphire Demitro). Right off the bat, the crudely humorous and giddily self-aware tone is set. The collegiate gang is eager for a fun-filled weekend in a cabin in the woods, until all is ruined by the discovery of the Necronomicon, also known as The Book of the Dead. A recording of a professor reading the book aloud serves as a calling to awaken the vilest, most foul-mouthed and pun-obsessed possessive spirits that Hell can offer, asking one demand from the campers: “Join us.”

Like the original film is famous for, the musical never shies away from pushing boundaries. In fact, the boundaries that it sets for itself begin at the scenery background and end at the last row of the “splatter zone.” In paying homage to many of the most memorable scenes of Raimi’s trilogy, the cast is not exclusive to all the fun. The audience, at least in the first few rows, gets the chance to actually feel the effects of the live, cartoonish carnage that ensues. To put it lightly, attendants may regret wearing the color white.

Yet the references do not stop at original trilogy. Keep an eye out for homages to plenty of other icons of 80s horror in the lyrics, the dialogue, and even hidden in the scenery, which is a brilliantly self-aware and loving recreation of the cabin from Evil Dead 2, talking moose and all.

The cast, which also includes Andy Ingram in the dual role of Ed and the aforementioned Moose, Jonathan Shaboo as lovable redneck Jake and Mark Willet as “Fake Shemp” (true “Deadites” know what I’m talking about), is a tour de force of classically trained theatrical talent and unbridled passion for the unconventional source material they are bringing to life. There is no question to, with every blood-squirting ballad and R-rated monologue, how much fun they are having, most notably Mills, who certainly has the timing, charisma and chin to serve as a proper fit for the role of Ash. Mills goes beyond chewing the scenery: he slashes it to pieces with one swoop of his chainsaw for a hand.

Even when the laughs turn monotonously cheap and the songs go overboard with crude, self-referential humor, it is impossible to not have fun with this big, energetic, bloody (very bloody) good time. It does a fan of The Evil Dead proud to see it inspire such creative, boisterous and immersive entertainment that would only show up every once in a blood moon. If you can take incessant gross-out gags, songs about possession and dismemberment and a potential increase to your cost of dry cleaning, do yourself a favor and give in to the Deadites’ demand: join them.