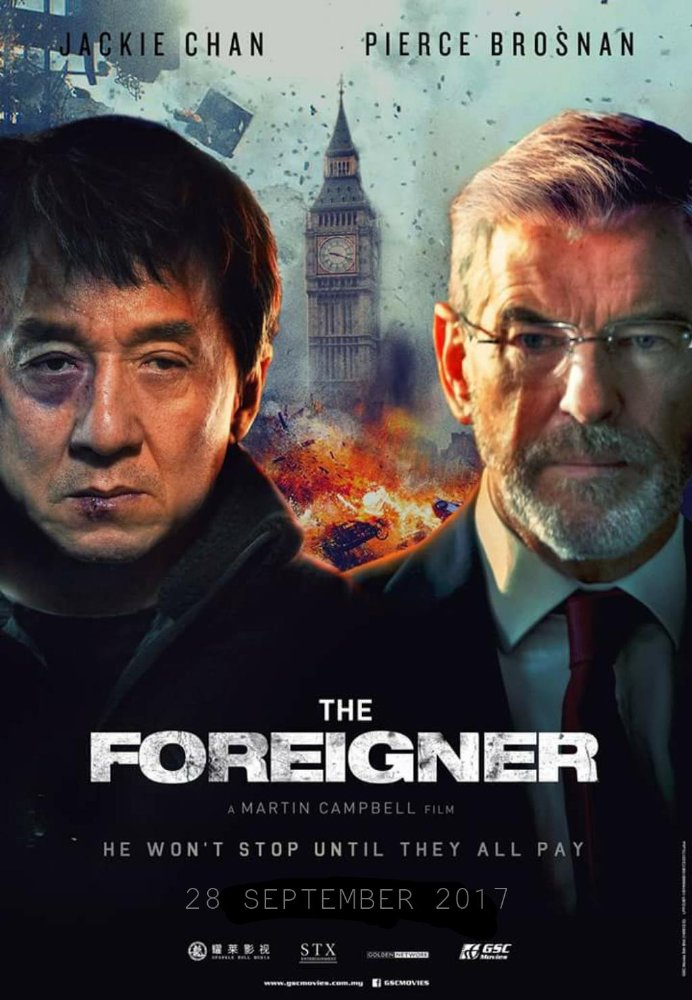 Chan and Brosnan fight… to be the star of the show

I believe there are many of us who, for years, have been asking the same question: where the hell has Jackie Chan been? Apparently, America’s favorite martial arts action star has been brushing up on his acting skills. The 63-year-old actor makes an impressive return to form, not only in physicality but also in emotion, as the title role in the thriller The Foreigner. As exciting as it is to see Chan kicking butt again, the film, overall, is a bit of an underwhelming mess.

Quan Ngoc Minh (Chan), originally from China, is a quiet restaurant owner living in London whose collegiate daughter, Fan (Katie Leung) means the world to him. One day, Quan sees his world crash down right in front of him when a terrorist bombing takes his daughter’s life. When it is revealed that the bombing was the act of unknown members of the Irish Republic Army, Quan seeks out the help of former IRA member turned government official Liam Hennessey (Pierce Brosnan) to find the names of the perpetrators. When Hennessey claims to have no knowledge of who was involved, Quan takes immediate disbelief in his claims, inciting a desire to take matters into his own hands. Soon, Hennessey discovers that there is more to this foreigner than meets the eye.

Those anticipating the same kind of superhuman fighting skills that Chan is famous for in his previous roles may be disappointed to see that the fighting style he exhibits is that of a more realistic nature. I actually greatly appreciated the more grounded approach to the action sequences, especially considering his character is an elderly man aspiring to put his violent past behind him. Chan is just as amusing even in the film’s quieter moments, exhibiting an emotional resonance that he has rarely been given the chance to show in his more high-profile American roles. It is refreshing to see Chan play something that feels this real.

I wish that I could say the same for Brosnan. The native Irishman seems to have lost his accent and is desperate to recreate an authentic sounding Irish accent for the role, putting a heavy, stereotypical inflection on every line of dialogue, which not only makes him less convincing, but makes the plot very difficult to follow. Yet, that is not all his fault.

The film attempts to balance two disparate plotlines that both revolve around Hennessey: Hennessey vs. Quan and Hennessey vs. the IRA (or does he?). Thanks to Chan’s compelling performance and Brosnan’s less convincing one, the Quan vs. Hennessey storyline is far more investing, not mention wholly simpler to understand. The Hennessey vs. IRA plotline suffers from pushing the unnecessary and lacking in the necessary: the unnecessary being forced plot twists that lead to little to no payoff and the necessary being subtitles. The more important a character is to exposition, the thicker their accent is. I imagine the 1992 novel which the film is based upon, The Chinaman by Stephen Leather, would be a great reference guide.\

Director Martin Campbell (Casino Royale) creates a world that is exciting and rich in tone, but the screenplay for The Foreigner is too much more than it could have been. I, personally, would have rather seen a straight-up revenge flick putting Chan at the forefront, but the film seems more concerned with over-explaining why Brosnan’s character deserves what is coming to him For seeing Chan kick butt again, this film deserves a recommendation, but there is not enough of his story to earn it.