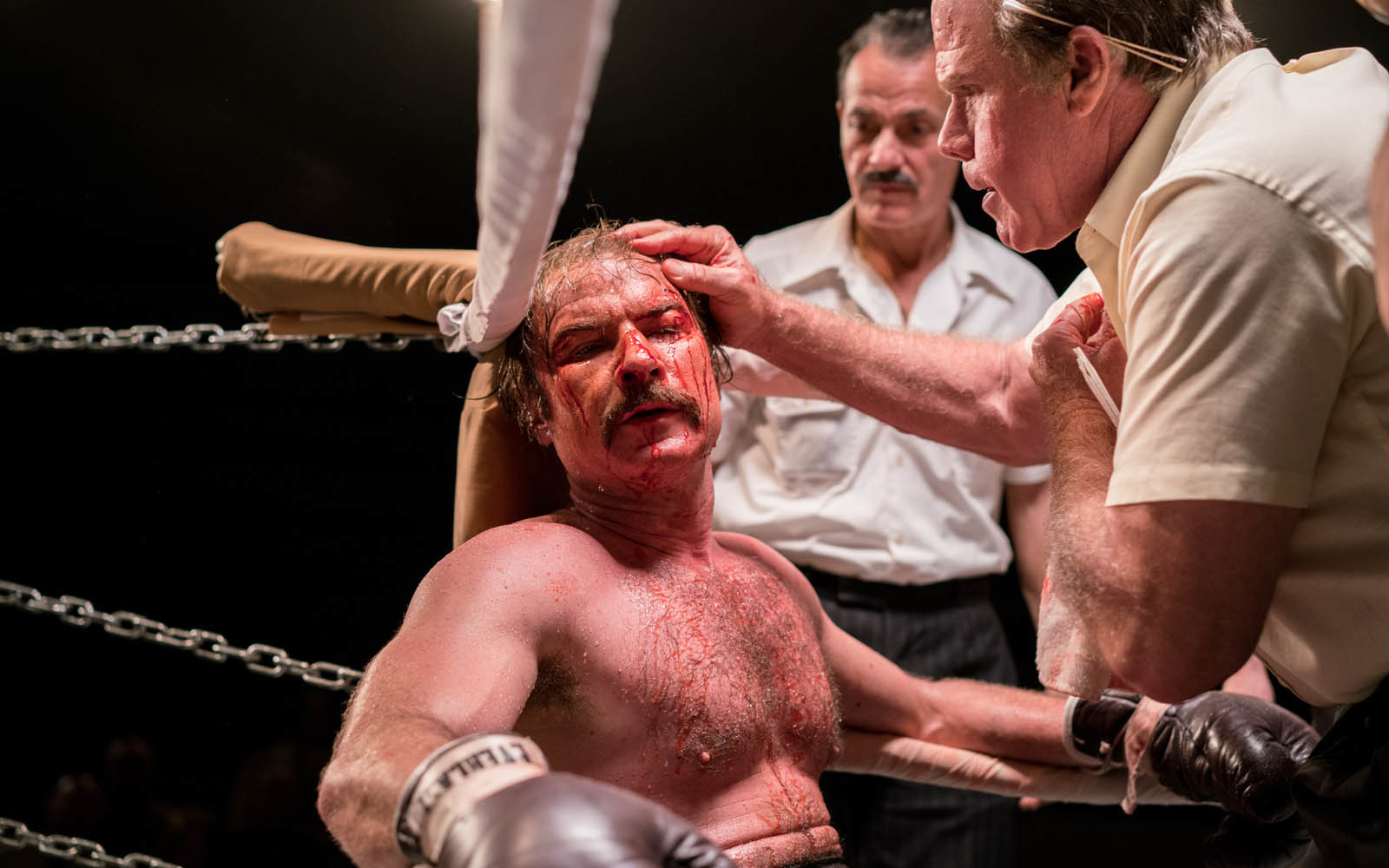 It would be a mistake to classify Chuck as a sports movie. Sure, there is a fight or two, but boxing is hardly the focus here. Rather, the “true life story” documents the rise and fall of a man graced with a fleeting dose of fame but unable to resist the allure of its vices.

An almost unrecognizable Liev Schreiber stars as Chuck Welpert, a liquor salesman by day and the “Bayonne Bleeder” by night. Chuck has risen through the boxing ranks to become the heavyweight champion of New Jersey, and now he faces a shot at the title. All he has to do is defeat a hot, young upstart by the name of Muhammad Ali (Pooch Hall). It’s no spoiler to say that things don’t go too well for old Chuck, but he still manages to surprise the naysayers and hold his own for just short of 15 full rounds in the ring. That’s enough to make him a hometown celebrity and the inspiration for a new boxing movie called Rocky.

What starts as a fairly intriguing premise quickly fizzles out over the remaining two acts of the film as Chuck spirals down a self-dug hole of drinking, drugs, and debauchery. The more important he thinks he is, the more his actions alienate his family (and the more outlandish his wardrobe becomes). This storyline of an everyman succumbing to hubris has been told countless times before, and unfortunately the screenplay by Jeff Feuerzeig and Jerry Stahl goes through the motions with nothing new to say and major story beats telegraphed far in advance.

Making matters worse is the title character himself. No sooner do we meet Chuck than we learn minutes later that he brazenly pursues extramarital affairs, to the ire of his wife (a commanding performance by Elizabeth Moss). What little good will Chuck has built up is immediately quashed by this revelation, and his subsequent poor choices leave little room for relatability or sympathy. Even his inevitable sobering doesn’t feel entirely sincere; the gravity of his sins minimized for the sake of a tidy, feel-good ending.

This isn’t to say Schreiber doesn’t act his heart out in this film, and he and his supporting cast members approach their paper-thin roles with conviction. Notable turns include Ron Perlman as Chuck’s sandwich-chomping manager and Naomi Watts as a flirtatious but strong-willed bartender. However, it is Morgan Spector who steals the show as a completely convincing young Sylvester Stallone. Scenes of him meeting with Chuck mark the highpoints of the film, and you may find yourself wishing you were watching a Stallone biopic instead. Also, Hollywood should take note: when it comes to recreating de-aged versions of various actors, just use real people.

Director Philippe Falardeau clearly enjoys recreating the sights and sounds of the 1970’s, and from a technical standpoint, the film handles itself ably. Unfortunately underneath it all, there isn’t a more compelling or original story worth telling. At one point, Chuck muses, “Sometimes life really is like a movie. Sometimes it’s better.” Not in this case. I think I’ll just re-watch Rocky again.

Chuck gets a C-