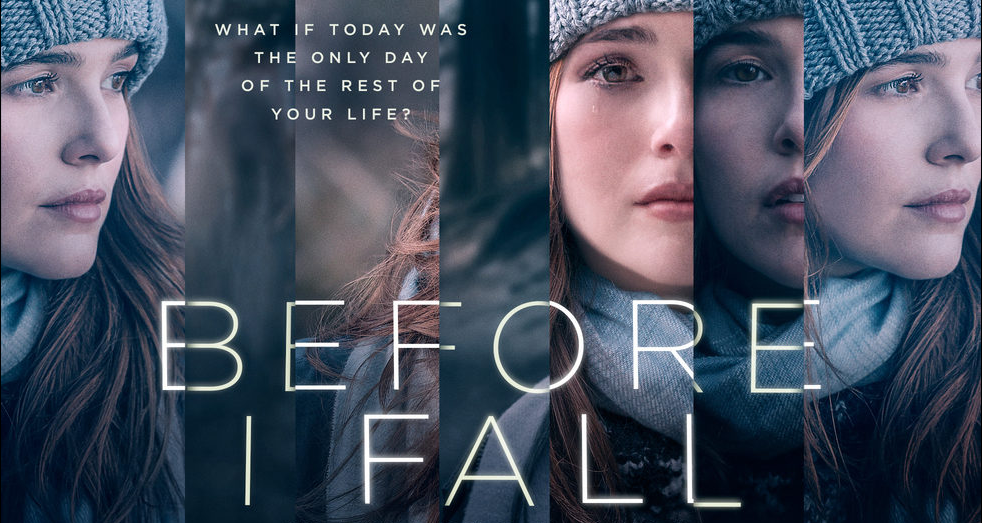 Have you ever thought of two of your favorite movies and wondered what it would be like to combine them into one? Before I Fall would be the result of the equation if you combined the 1993 Bill Murray classic Groundhog Day and Tina Fey’s 2004 gem Mean Girls. Unfortunately this film doesn’t deserve to be mentioned alongside either of them.

Before I Fall is a film adapted from the 2010 young adult book of the same name, and revolves around a day in the life of Sam Kingston (Zoey Deutch). Sam is a high school senior in a clique of four very wealthy and snobby girls, who openly bully their peers and pretty much do whatever they want without repercussions.

As “Cupid’s Day” progresses (a day in which students deliver roses to their crushes), we see a number of events that ultimately lead to a fatal wreck just after midnight. Sam then wakes up in her bed at the same time the next morning remembering all of it, but the date is still February 12th and she’s not sure what just happened. Was it a dream? Why did it feel so real? The audience is then led on to a repetitive journey with Sam as she relives the same day over and over again trying to find the pieces of the puzzle and save herself at the same time.

The cast is comprised of mostly up and comers. It’s the first time in a while that I’ve seen a film where I didn’t recognize virtually anybody in it. Deutch (Why Him?, Vampire Academy) and Halston Sage (Goosebumps, Neighbors) lead the way in this film as Sam and Lindsey. For the most part, their performances, as well as the rest of the supporting cast, were alright – with Deutch shining brightest as the lead. It was the dialogue and actions of the characters throughout the film (especially in the opening minutes) that simply didn’t feel real, and I had a hard time connecting with any of them. One could argue that is due to the concept of the movie, in which time resets and only allows our protagonist to grow – and hinders the rest of the characters from doing so.

I managed to find myself slightly intrigued as the pieces started to come together – much more so than I was at the beginning of the film. Deutch does a great job transitioning Sam from an unbearable brat to a redeeming and selfless character, as she learns more about her peers and even her closest friends (whom she may only blindly follow). In doing so, we learn why Lindsey (Halston Sage), the biggest bully, is the way she is. Unfortunately nothing redeemable comes from it – at least not in the timeline we’re given over and over.

I think the film was constructed decently, considering the plot device of the time loop, though the editors may have gotten off easily since the characters are wearing the exact same clothes throughout the entirety of the movie (with the exception of one day). There were also a few transitions that went from a dark night scene to nothing but a bright white light that was painful to the eyes, and a confusing out-of-nowhere slow motion sequence toward the end that served no purpose.

One of the main things that irritated me throughout the film was the forced exposition scenes and dialogue, in which characters would tell the viewer exactly what they needed to know to move the story forward. What frustrated me the most, however, is the film’s ending. Sam literally has the ability to exhaust all options before coming to the final outcome, yet the film fails to convince the viewer that she has.

I understand as an almost thirty year old male, I’m not the target audience for this film. There’s a change that it could have a much larger impact on the younger generation. Under the surface of this film is a great message for teens and young adults, one in which Sam demonstrates compassion to her peers. She realizes that every action has a consequence, and everybody has it in them to be the best they can be to one another – and make the world a better place. And for that message, I applaud the film.