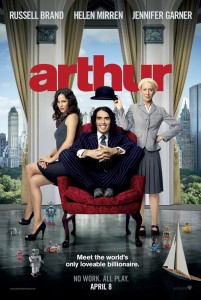 Sometimes I feel as if I’m the only person that doesn’t have a strong opinion one way or the other on Russell Brand. It’s kind of problematic considering that having strong opinions is, you know, kind of my gig. But I thought casting Brand as the titular role in Arthur was a potentially brilliant move. Brand is famous for his own addiction issues and loves to make a spectacle of himself. As polarizing as he can be, he seems to be tailor made for the role. For those unfamiliar, the film is a remake. The original starred Dudley Moore as the filthy-rich and stinking-drunk Arthur Bach. A trust-fund baby before the term was popular, Arthur loves squandering his family’s fortune almost as much as he hates working. Luckily, his family has more money that he could ever conceivably squander. However, his lavish lifestyle is threatened when his mother vows to cut off the money if he doesn’t marry the woman of her choosing. Compounding problems is that the avid bachelor has apparently just met the woman of his dreams.

Brand turns out to be a solid choice. Arthur is a mischievous prankster and Brand has that in spades. More importantly he brings a trait to the role that we haven’t seen from him previously – sweetness. Without that inner sweetness he is little more than an obnoxious drunk. But he manages to make the character likeable despite his many flaws. Where he stumbles is in showing us Arthur’s sadness. It’s odd given the inner demons that Brand has struggled with (heroin, bulimia, bi-polar, self-mutilation) the he has such a hard time conveying the darker parts of the character.

The film’s story remains remarkably unchanged. Arthur still has his faithful yet droll servant Hobson (Helen Mirren), his working class girlfriend (Greta Gerwig) and his humorless fiancée (Jennifer Garner). In fact, the film’s biggest drawback might be its almost slavish devotion to the original. The film gets its biggest laughs when Brand is allowed to cut loose and color outside of the lines. But the film replicates so many parts of the original that it undermines the “rom” part of this rom-com making it feel obligatory rather than spontaneous.

The original came out in 1981 and, in the interest of full disclosure, I’m a huge fan of the film. I’ve probably seen it fifteen times over the years. It’s easily Dudley Moore’s finest work and a charming film that (Christopher Cross be damned) holds up much better than one might think. But it had the good fortune of being made about 35 seconds before society collectively stopped calling people “drunks” and began calling them “alcoholics”. Suddenly things like driving your Bentley down the highway while drinking straight from a bottle of champagne weren’t quite so endearing. The present day incarnation handles things a bit more gingerly. The time out we (thankfully) never see Arthur driving and the filmmakers do acknowledge that it takes a little more than the love of a good woman to tackle an addiction.

There are certainly laughs to be had. And Brand and Gerwig have a good chemistry when the script gets out of their way; though it’s admittedly never as good as Brand and Mirren’s chemistry. It does get a little sluggish in the back half. It’s no match for the original but it’s far superior to most what passes for romantic-comedy these days.