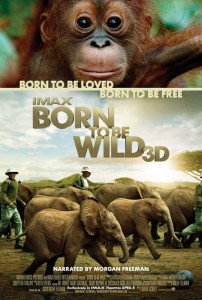 It is one thing to love animals, but it is a whole different story to change your entire life to take care of them. “Born To Be Wild 3D” tells the story of two people who have done just that. It follows the lives of two inspirational animal experts who have dedicated their lives to rescuing and raising baby orangutans and elephants, and helping them to live normal lives in the wild. Filmed in IMAX 3D, it is a truly stunning sight to see on the big screen.

“Born To Be Wild 3D” is split into two parts: Dr. Birute Galdikas in the rain forests of Borneo, and Dame Daphne Sheldrick in Kenya. Their two intriguing stories weave back and forth throughout the film, as they teach us of the problems going on in both parts of the world – and what they have done to help. Probably the most interesting part of the documentary is that most of the audience will probably be unaware of the trials and tribulations that these animals go through on the other side of the world. The fact that these two teams of animal lovers have chosen to completely envelop their lives around these orangutans and elephants is truly fascinating, and eye opening to say the least.

In Borneo, Dr. Galdikas rescues baby orangutans from their forest homes that are destroyed. Many of them are left as orphans as their parents are killed. She and her team take care of the primates like they are their own children, and raise them in a setting where they can grow and learn. They drink plenty of milk, play on jungle gyms and with toys, and need love from their caretakers. They are much like our own children, and it is amazing to see these similarities. In Kenya, baby elephants are left to die after their parents are poached for their tusks. Saphne Sheldrick and her team rescue these elephants, and take on the role of their parents. Although these wild animals are skeptical of humans at first, they soon warm up to them and except them as part of the family. It is amazing to see these animals interact with Sheldrick’s team – they play, eat together, and even sleep in the same room together. In both stories, it is amazing to see the bond that is shared between humans and animals, and how each of them changes the lives of one another.

Director David Lickley and Cinematographer David Douglas did a great job giving us a visual insight into these two foreign worlds. Filmed in IMAX 3D, both the lush rain forests and vivid savannah are captured beautifully. If there is one great use of 3D technology, this is it. The documentary is completely immersive, as the audience is captivated by the stunning visuals of Africa and South East Asia. To see these animals up-close and in their natural habitat is touching – and the filmmakers made full use of the 3D technology to capture every moment. Narrated by Morgan Freeman, the story flows unhindered from beginning to end.

Although the film is only a mere 40 minutes, “Born To Be Wild 3D” will take you on a journey that feels much longer. These true stories of the bond between people who love animals and the animals who need their help are truly touching. The documentary makes great use of modern 3D technology, and is a great escape into a world that seems so far away. Most importantly, it teaches us the difference that every single person can make if they just care.