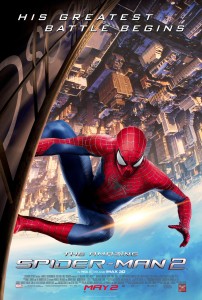 It seems like just yesterday I was standing in line for the sequel to the original Spider-Man (2000) at the midnight show. Yet here we are ten years later, the franchise has been rebooted, and another sophomore installment is at hand. Spider-Man 2 (2004) was an incredible sequel, to a remarkably strong first attempt to bring the wall-crawler to the big screen (not counting the 1977 made-for-television movie). So we have proof first-hand that sequels can be just as good, and better, than their predecessors. Yet concerns of too many villains and lackluster early reviews had this reviewer and Spidey-fan a bit worried going into the movie. But fear not True Believers – this sequel is just what we needed.

The story picks up a year after left off, following the events of The Amazing Spider-Man (2012). The web-slinger is more popular than ever after saving New York from Dr. Conner / The Lizard, and is regarded as a hero by pretty much everyone except for J. Jonah Jameson (still no appearance, but we get a pretty funny off-screen cameo in this one; just bring back J.K. Simmons already). Even the police are happy to work with Spidey as he neatly wraps up their villains and drops them off for them. Peter (Andrew Garfield) is still struggling with the mysterious disappearance of his parents and the briefcase his father left behind – and now added to the mix is the death of Captain Stacy (Denis Leary). He is haunted by the ghost of the former captain (his conscience taking its toll) which forces him to break up with his girlfriend Gwen (Emma Stone) due to the promise he made to her dying father that he would keep her away from Spider-Man. Yet have no fears – Gwen is still involved in most of the film.

The film introduces a villain we have yet to see on the silver screen – Electro, played by Jamie Foxx. If you are familiar with the comics, this isn’t the green and yellow Electro with the lightning bolt mask. Rather this villain comes straight off the pages of Ultimate Spider-Man #10, bearing an almost identical design to the character drawn by Mark Bagley. However, in keeping more true to the original storyline than the Ultimate comics, Max Dillon is an electrical engineer working for Oscorp who is involved in an accident while repairing a disconnected power line. Max is electrocuted, falling into an experimental tank full of electric eels, and wakes up surging with electrical powers. Foxx plays the character like a comic book, which being the source material, which blends in perfectly with the look and feel of the film. The casting couldn’t have been better.

The main concern from comic book fans everywhere with the film was this: too many villains. From the trailers and posters we get Electro, and the Rhino (Paul Giamatti), and the (Hob?)Goblin. We’ve seen this problem before (ala Spider-Man 3, Batman and Robin). But have no fears; There is really only one bad guy in The Amazing Spider-Man 2. His name is Electro. The rest are merely cameos, setting up for the “Sinister Six” spin-off movie and future installments in the series. And a smart move to set them up in this film, so that we don’t have to get a villains origin story in each and every sequel. Give us three in one movie, and you only need to give us three more in the next one. Giamatti’s character is merely a bookend in the film, where we see him for about 5 minutes in the beginning of the movie and maybe five at the end. Harry Osborne, who is played spectacularly by Dane DeHaan, is one of the main characters in the film. Yet he isn’t turned into the Goblin until the very end, although he is involved in a crucial moment at that point.

The chemistry between Andrew Garfield and Emma Stone is still just as brilliant as it was in the first film. It was a great decision by director Marc Webb to cut out Mary Jane from the story, where she was originally set to be played by Shailene Woodley. Although I think Woodley is a great actress (check out The Spectacular Now if you haven’t seen it), her character’s introduction would have taken away from the love story in this installment, which is a very crucial part of the entire thing. As I think we all know, Gwen was Peter’s first love interest – yet ultimately it becomes Mary Jane Watson. So adding her into the mix would have really detracted between Peter and Gwen’s relationship, which is crucial nearing the end of the film.

And this is where we get REALLY spoilery.

In once again keeping true to the comics, this time The Amazing Spider-Man #121, Gwen Stacy dies.

This will be the biggest shocker (no pun intended, it was Goblin and not Electro) for the non-comic fans. Everyone loves Emma Stone, and loves her chemistry with Garfield in these movies. It is going to be hard to accept that this has to happen. But it does in the original comics, and it does in the Ultimates (although differently). Peter has to end up with Mary Jane, and it would be extremely difficult to break these two up for good after all they have been through. He couldn’t just give her a bunch of crap about breaking up with her to protect her, and then go and date Mary Jane. It just wouldn’t work. But there is no doubt, she will be missed, and it is going to take some time before Peter gets that close to someone again.

There are some absolutely breathtaking visuals in The Amazing Spider-Man 2. The first film looked good, but the more-experienced Webb takes this one to a whole new level (remember, his first movie was the $7.5 million dollar 500 Days of Summer, followed by $230 million dollar The Amazing Spider-Man). It shows that Webb has had some practice, and his vision for this film was fantastic. Spider-Man swings through the city with ease, using the same extremely-realistic CG from the first film, and seamlessly blends in with his surroundings. Some of the shots as we follow Spidey’s webs, acrobatics, and fights are really neat to look at. The same goes for Electro and the Goblin. And seeing the film in 3D actually might not be a terrible idea, as it does add a fun angle to the whole thing.

If you are a Spider-Man fan, specifically of the reboot, there is no doubt that you will enjoy this movie. The Amazing Spider-Man 2 really feels like a comic book brought to life, which is exactly how it should be. The story moves along at a steady pace, is is never bogged down by too many plot points or villains (which was the main concern going in). The film is a great way to kick off the summer movie season, and has me excited to see what Sony and Marvel have in store for our friendly neighborhood Spider-Man.

The Amazing Spider-Man 2 is a solid B.