Review: JOSEPH AND THE AMAZING TECHNICOLOR DREAMCOAT at the Fabulous Fox (May 29 – Apr. 11) 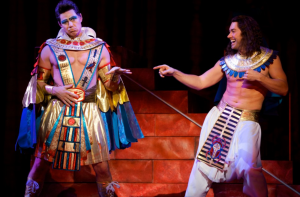 Joseph and the Amazing Technicolor Dreamcoat National Tour 2014. Photography by Daniel A. Swalec

Tony Award-winner Andy Blankenbuehler directs and choreographs this perennial favorite. Under his experienced hand, all the well-loved music and humor sparkles, enhanced by brilliant, yet subtle, updates for today’s audience. For an evening of high-octane song and dance in full Technicolor, catch the show at The Fabulous Fox now through May 11th!

This particular show features a dynamic married duo – with Diana DeGarmo and Ace Young of “American Idol” fame leading the cast. These two in particular impress with stellar vocal technique and solid acting skills to boot. DeGarmo performed in the show as a choir kid and said she has long looked up to the role of the Narrator.

Usually a ‘narrator’ role fades into the background as a story takes off; that’s not the case with JOSEPH. Here the Narrator’s songs begin, end, and anchor the entire show, woven seamlessly (for the most part) throughout the rest of the music. Sometimes she speaks directly to the audience, offering a running commentary on the show; at other moments when she seems to act as a character within the story, and steals center-stage with some knock-out songs. DeGarmo rises to meet the demands of the role with great panache.

The story follows Joseph (Ace Young) who is the second-youngest son of Israel. Joseph’s brothers dislike him because – apart from being the favored son of their father – he sees visions of the future. In their jealousy, the brothers (including Simeon, played by Paul Castree, and Reuben, Brian Golub) decide to sell him into the hands a few slave-traders. Joseph winds up in Egypt and in jail before rising through a miraculous series of events to serve at the right hand of the Pharoah. Of course the Pharoah is “The King” – and in this musical that means Elvis – and thankfully Ryan Williams’ impersonation is spot-on, and really quite riveting to watch!

Young does a wonderful job communicating Joseph’s early naiveté. In the end, Joseph forgives his brothers for sending him into exile (and causing him to suffer all the hardships that entailed); this may be the biggest miracle in the story, but the zaniness surrounding the moment seem to hinder its clarity somewhat. Some of the poignancy of the plotline may seem a bit lost in the shuffle, but that may just be par-for-the-course with this particularly zany show.