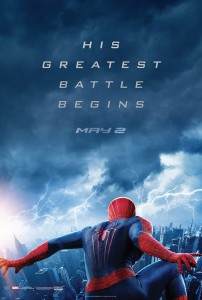 A couple of years ago, a swiftly constructed reboot to the Spider-Man movie franchise came into fruition brought up angst in the idea of repeating an origin story that is still fresh in the minds of movie viewers.  In my review of The Amazing Spider-Man, I had made mention of it being a similar story but not the exact same story. Naturally, one would expect the sequel to up an the ante on multiple accounts for all things Peter Parker (Andrew Garfield); being Spidey, his love interest, Gwen Stacy (Emma Stone), and we cannot forget the particularly unsavory characters seen in the trailers and recognizable to comic readers. Does this movie demonstrate everything a spider can? One would have had to anticipate that line being thrown in here somewhere.

The Amazing Spider-Man 2 leads off with a flashback regarding Peter Parker’s parents, Richard Parker (Campbell Scott), and Mary Parker (Embeth Davidtz) and serves as something of a continuation to what was seen to the opening scenes of the first film. Going back to the present, it is  some year and half (the exact passage of time can be based off of the first film) later, finding Peter, Gwen, and the  current senior class of Midtown high moving on from high school. For any other student, it would have just been a normal graduation, but for Parker it has to be something of a balancing act between a crime outbreak being orchestrated by Aleksei Sytsevich (Paul Giamatti), and being a no-show for his own graduation. Upon his heroic swinging around New York, Spider-Man encounters timid electrical engineer, Max Dillon (Jamie Foxx), who feels special that anyone paid him any mind, and especially someone as high profile as Spidey. To Peter’s surprise, his childhood friend, Harry Osborn (Dane DeHaan) makes  a return into the city which seemingly starts out as a long-overdue reunion shifts into an act of desperation.

Most people  who were keeping track in the trailers, or prior news about casting, you can see the villain count is up to three; Electro, Green Goblin, and Rhino. For anyone who cares to recall, Spider-Man 3 attempted a feat of juggling that many villains and it turned into nothing less of a train wreck. Jamie Foxx does the best with what he’s given as Electro. That’s not to say that he made for a poor villain, but more so an acknowledgement of the characters’ occasionally hokey lines. Nonetheless, he is very much a threat. There is something to be said of the CGI surrounding Electro.  It was something of a visual spectacle the the greater the use of his powers grew throughout the movie. It’d be easy to liken him to an extremely aggravated Dr. Manhattan ( but not in that same realm of power, let’s be real here) based on looks. An argument can be made that Electro was ever so slightly underutilized despite the generous (but nicely flowing) running time for the film. As for the Green Goblin, DeHaan does a great job displaying a disgruntled and betrayed Osborn. After seeing the movie Chronicle and hearing the announcement of his role in the movie, one can’t help but have a charitable assumption of his portrayal and DeHaan delivered it. Paul Giamatti’s Rhino is almost something of a caricature of a madman. It’s basically like, Giamatti was told to go flow blown ridiculous and comicy as Rhino. Not going to lie, it worked in some odd way. It’s amusing at the very least, and Rhino has always been more of a goon doing someone else’s bidding and not so much a man with a plan that could carry a majority of the movie. In summary, Rhino gets the least screen time, and his lack of screen time doesn’t hurt the movie and alleviates the aforementioned balancing act of several villains.

How was the titular hero in all of this? Andrew Garfield has secured his place as the famous wall crawler. In costume, his portrayal is very reminiscent to the comic book character with his constant banter, quips, and overall antics. What makes Spider-Man fun is the fact that he gets on the NERVES on some of the villains while fighting them. I had mentioned the first movie showing those crucial aspects of the character where this movie makes it clear without a doubt.

Visually, The Amazing Spider-Man 2 is stunning without a doubt. If considering shelling out for a 3D viewing, this movie could be deemed worthy of such an affair.The webswinging about New York has never looked better, also it was a neat effect seeing Spidey’s costume move a bit with the wind throughout the air. The display of Spider-Man’s agility is the most elaborate to date with every quick finite twist and turn.

Likely one of the most obvious positives to the movie is once again the romance between Garfield’s Parker and Stone’s Gwen Stacy. It’s quite clear with build up of their relationship the rapport has greatly improved, and scenes in which they have their arguments don’t seem at all forced, but executed in a way that  some romantic comedies wish they could pull off so naturally. Could it be stated that it is one of the best super hero movie romances? Very much so. The interactions are always entertaining. In addition to that relationship, is the heartfelt display between Peter and Aunt May (Sally Field). As to be expected, Sally Field brings an authenticity to her concerned and loving Aunt May. It’s not one of those cases where you find her annoying and scolding, but rather you sympathize with her finding a connection with her only family left; her nephew.

Overall, The Amazing Spider-Man 2 brings a balance of fun, and drama to the movie screens for the uprising of summer. The lack of screen time for the main villains at play detracts from what could have made a superb second act. It seems jarring as mentioned before that there would be a lack of villain screen time and or development considering all of the time available to be utilized. While not Amazing, so to speak, it is a good addition to the Spider-Man movie franchise.

The Amazing Spider-Man 2 is a B+