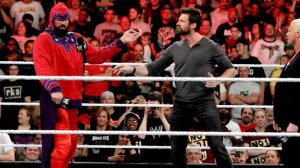 Special Guest Hugh Jackman came to town to promote X-MEN: DAYS OF FUTURE PAST, and is greeted by an unusual Magneto (Damien Sandow). Photo © WWE

This week’s edition of Monday Night Raw was not only the go-home show for the Extreme Rules pay per view, but also aired live from St. Louis. With the pay per view being less than a week away, there was not much hype surrounding this weeks edition of Raw, which was not necessarily a bad thing. WWE programming had to deal with the death of Ultimate Warrior, Daniel Bryan’s wedding, and the death of his father, so it’s forgivable that the upcoming pay per view was not all that touted. Regardless, the past few editions of Raw have been solid and Monday’s show was no different.

My one quarrel with this week’s show was the beginning and ending. I really felt they should have been switched. The beginning of Raw was the most watched segment of the year and with good reason. Bray Wyatt did it again. The creepy villain that fans can’t get enough of stole the show at Scottrade Center Monday night. The show opened with John Cena entering the steel cage, which will be the stipulation for his match with Wyatt at Extreme Rules. Cena was convincing in blaming the crowd for selecting his 3-on-1 handicap match the previous week. Cena only muttered the words “Why?” to the crowd. Many fans booed, while children cheered the face of the company. Cena rambled on about how just 10 years ago, St. Louis was the site of his debut on Raw, and how he received the biggest pop of his career when he was drafted to the show. In his defense, I was at that show and it was quite the ovation. Before Cena could chastise the WWE Universe anymore for their infatuation with Wyatt, the lights went out. Enter a children’s choir, the children’s choir from Ladue School District to be exact. The children sang “He’s got the whole world in his hands” as Cena stared in disbelief. The lights went out again, as Wyatt made his way to ringside along with the children, serenading the crowd. As the children circled the ring, the lights went out again, only to come back on revealing the children in sheep masks. Wyatt laughed uncontrollably, taunting Cena. The creepiest part of the segment had to be the child sitting on Wyatt’s lap. Cena looked destroyed, as his fan base of children were turning to the dark side.

This was probably one of the best segments I’ve seen on Raw in years. I absolutely loved it. It was well done. It was so well done that I felt it should have been the ending of Raw. The rest of the show seemed a bit less spectacular after that.

The ending featured The Shield and Evolution. Randy Orton received quite the pop from his hometown crowd. Ric Flair also surprised the audience by appearing and shaking the hands of the members of The Shield. Triple H, Batista, and Orton looked on in disbelief. Orton then face Roman Reigns, but the match ended in a disqualification, as members of each group started brawling inside and outside the ring. Raw went off air with The Shield getting the best of Evolution before the pay per view.

Not that I think it was a lousy ending, but I really think the show should have started with this segment. It was nowhere near as powerful as the beginning of the show. I understand why the WWE did things this way, but all in all, the Wyatt/Cena segment was head and shoulders above anything on Raw.

I also liked the Daniel Bryan/Kane segment which featured Kane coming through the ring to try to take Bri Bella straight to hell. Watching Bryan, wearing a neck brace, clock Kane with a wrench was pretty cool. The WWE is starting to focus a lot of the storyline of this feud on Bri and Stephanie McMahon, which is wonderful. Ending the segment with Bri calling Stephanie a bitch was awesome. It’s nice to see the WWE pushing that PG boundary. I think the Bryan/Kane match will be entertaining at Extreme Rules. I would like to see some bloodshed, but in the PG-era, that’s a big no-no.

Finally, it’s good to see the WWE really pushing the mid-card talent. I’m mainly talking about Cesaro, Jack Swagger, Rob Van Dam, and Wade Barret. All these guys could be potential major players in the company. Barrett’s new gimmick, as Bad News Barret is awesome. The crowd is loving it. I know that that WWE wants to paint him as a villain, but I don’t see it happening. The crowd loves him too much. I look for him to get the win over Big E on Sunday.

Overall, Monday Night Raw gets a solid A for this week. I’m actually looking forward to Extreme Rules on Sunday. Let’s hope it lives up to its name.