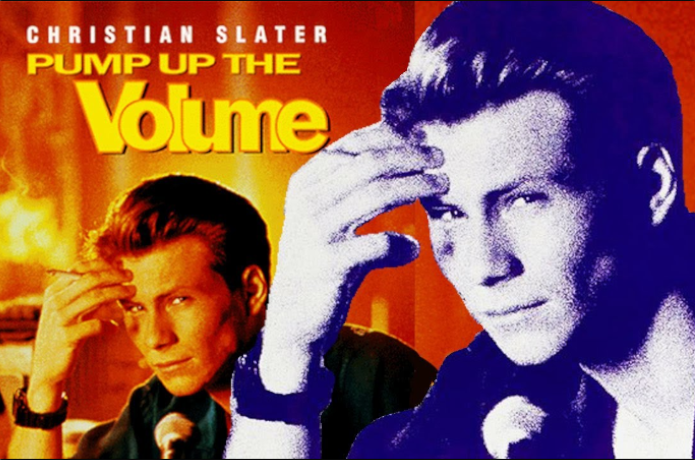 This week we travel back in time to 1990 for the film ‘Pump Up the Volume.’

I always think how complex life seemed as a teenager, yet looking back on it now, life was pretty damn good and easy. ‘Pump Up the Volume’ was one of those teen flicks that was basically telling teens to give society a big, giant middle finger, and who better to do that at the time than Christian Slater. Slater had the looks and attitude in the film of a smart-ass teen who was fed up with the norm, a teen who was fed up with being told what to do. In essence, that’s what ‘Pump Up the Volume’ is about. Being a teen was supposed to be about spending time with your friends, testing limits, getting a taste of adult vices, yet there are always those introverted kids, like Slater’s character Mark Hunter, who deal with the daily struggles of being an awkward teen. I think we’ve all been there, I know I have. I think that’s why I love this film so much, Slater’s character reminds me a lot of myself. Going home from school at night, barricading myself in my room, listening to loud, alternative rock music, smoking cigarettes, writing my thoughts down on paper that I was too scared to shout out loud. ‘Pump Up the Volume’ seemed to be about my life, being secluded on my own island.

Hunter has no confidence in himself during the day at school, but at night when he retreats to his room, he becomes “Hard Harry” and runs his own pirated FM radio station. Harry uses the station as an outlet to rant about being a teenager and the happenings of high school. Little does Harry know, the entire school is listening and agrees with his sentiments. School officials get wind of the station and after a student suicide, begin to target Harry and want the station shut down.

The film touches on political correctness, censorship, corruption, free speech and the feelings that a lot of people deal with in feeling detached from life in general. Is the film a look at what being a teenager is really like? Maybe to some it is, maybe to some it isn’t. There are always those who say high school was the greatest time of their lives and I have to roll my eyes. They are sure missing out on a hell of a lot more in life if that’s the highlight.

When ‘Pump Up the Volume’ was released, it was not a success in the theatre, unlike other teen films. It has since become a cult-classic. Much like Harry, my room was messy and cluttered, littered with alternative rock albums from Jesus & Mary Chain and Primal Scream along with pop culture posters. Away from school, like Harry, I was angry, blunt and told the honest, sometimes too honest truth in my writings. If I would have had a radio station at that age, I would have utilized it. Harry had a saying that has stuck with me all these years, “so be it.” That’s something I say and think quite often. I think there’s a little Harry in all of us. Some of us aren’t afraid to let him out, while others retreat to their room or their basements to let their inner Harry come to the surface and spew their true thoughts. I mean if you really think about it, this film was talking about social media before there was social media. Nothing was off-limits or taboo.

“Pump Up the Volume” is one of those films that was probably a bit before its time. The ‘Heathers’ actor’s star seemed to fade out a bit shortly after the film and he now is experiencing success on television. While he hasn’t been in a film I really enjoyed since “3,000 Miles to Graceland,” Slater is one of those actors I always pull for because of films like ‘Kuffs,’ ‘Gleaming the Cube,’ and ‘Pump Up the Volume.’ If you haven’t seen ‘Pump Up the Volume,’ or just don’t remember it, do yourself a favor and see it. It’s an entertaining film, but if it’s not your cup of tea, then…so be it.

Pump Up the Volume gets a B+.