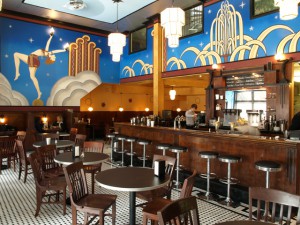 Although the word is already out about this great store, it isn’t swarming with yuppie preteens or anything yet. As you might have guessed from the title this is a throwback to old style soda fountains that have all but been lost. This place is helping to form one of the cornerstones of the quickly developing Midtown area near SLU. Many of the current area stores and restaurants such as Vito’s or the Good Pie give off a slightly more grown-up Loop aesthetic, (maybe because of the proximity of Powell Symphony Hall and the Fox Theatre) and I think this fits into that category.

First walking into this place I was surprised by the spaciousness of the place, and taken aback by the much talked about painted murals. The details devoted to the main parlor are really spectacular. The bar, tiling, and woodwork do a great job of giving you a retro feel. I was helped right after being seated in one of the high-backed booths and started off with one of their house made phosphate sodas . The root beer was smooth and well made. The service was good and the waitress shared with me some of the history of the building. Apparently the owners of the store first bought the property to serve as a radio broadcast station before they found the old soda fountain in the basement, then came up the the realized concept standing today. Also they actually do broadcast out of the Fountain, although she did not know the frequency. 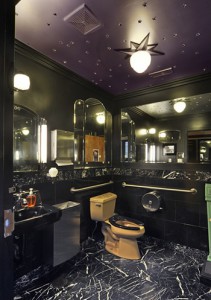 Looking at the menu it was obvious the Fountain was focused on desserts, as you would expect. I still ordered their veggie sandwich and it was about on par with something you would get at St. Louis Bread Co., as I said the place is for dessert. The menu advertised it’s “pretzel cones”, which are the similar to a typical waffle cone except made with pretzel. This item, although, was included along with many other zany menu items such as the “World’s Smallest Sundae”. I had the basic vanilla pretzel cone but it was impressive, a fan of anything sweet and salty will surely love the pretzel cone. As far as food goes at the Fountain, it was definitely above par. There was one more thing to check out though before I left.

The bathrooms at Fountain have recently been voted the “Best Restrooms in America” by a Cintas Corp. contest and they are certainly impressive. The rooms carry the painted and ornate decorating style of the main parlor except on a smaller scale. The most impressive aspect of the restrooms was the extremely high quality of the construction. The marble and mirrors are first rate not to mention they’re immaculately clean.

The Fountain at Locust is a most definitely worth a visit if you have not been yet. The spectacular aesthetics, the great food (especially desert), and solid waitstaff come together to make a verymemorable visit. Make a trip to this destination next time you’re seeing a show at the Fox or Powell.