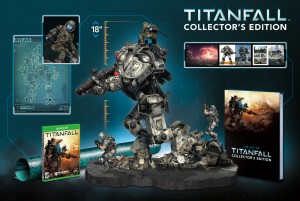 At this point in the game, Respawn doesn’t need to do much else to convince people that its new game Titanfall will be THE game to get in March. That doesn’t stop them though, during the VGX Repawn’s very own Abbie Heppe and Vince Zampella took the stage to announce two new Titans.

The first of the two came in the form of a slick promotional video by Hammond Robotics (a fictional company that makes Titans within the Titanfall universe). The new Titan deemed the “Ogre” gets its name due to its gorilla-like stance and formidable armor and sluggish, but heavy movements. It’s being billed as a much harder to take down Titan at the cost of mobility.

The second Titan the “Stryder” was revealed in same fashion and is pretty much the exact opposite of the Ogre. The Stryder class is a barebones, fast moving Titan made for speed and agility. One can naturally assume since it’s faster, it’s less powerful – you’ll have to weigh the benefits and cons of each Titan, which is good, considering Titan combat is shaping up to be not just about skill, but strategy as well.