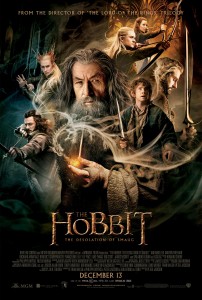 Yes, it’s better than “The Hobbit: An Unexpected Journey” (which, in all fairness, isn’t necessarily a bad movie, just a bloated one. It just felt so… padded, in parts.)

Whereas director Peter Jackson’s original foray into Tolkien territory with “The Lord of the Rings” trilogy was lengthy, it was also unquestionably epic, with each step of the long journey representative of the tax and toll it took upon the Fellowship. In contrast, this new trilogy – based upon a much smaller body of source material – resembles one of those huge holiday banquets you see in photos: attractive, enticing and rich with promise, until you sit down and realize that you’ve got dig through a plate of parsley and other garishly adorning garnishments.

Well, with this second film in the trilogy, it feels like we’re finally starting to clear our way through the filler, moving beyond the appetizer round, and getting to the real meat and po-tay-toes.

But we’re not there yet.

The film picks up where the previous film left off – Bilbo Baggins (flawlessly played by Martin Freeman) and the band of dwarves led by Thorin (Richard Armitage) are still working their way to the Lonely Mountain, still being pursued by an angry orc with a spork for an arm, and still getting ditched by Gandalf (Ian McKellan), who is off on his own journey to play detective in his pursuit of the real story on the Necromancer and what trouble he might be brewing.

The film surpasses “The Hobbit: An Unexpected Journey” in a couple ways: one, it ups the action across the board, including a fantastic getaway sequence for our hobbit and dwarf contingent involving barrels, orcs and elves; two, the introduction of said elves. The addition of fan-fave Legolas (Orlando Bloom) and, gulp, a female elf (Evangeline Lily in her most ass-kickiest since we last saw her on “Lost”) named Tauriel adds an element lacking in the last film – emotional resonance.

Bringing more relatable – well, somewhat relatable… depends how dreamy you look or how perfectly conditioned and coiffed you get your own luxurious mane – and humanistic characters into the fold, it’s easier to feel a little more attached to all the drama at hand. And once our characters are smuggled into the river town by boatsman Bard (Luke Evans), the audience is able to see the greater global threat at stake (something oddly missing in the previous film – sorry dwarves, not that I don’t care about your mountain and stuff, but you know).

Which leads us to that threat… the Cumberbatch! Sorry, Smaug the dragon! Beautifully animated, deviously dialogued, Smaug is truly a sight to behold. Benedict Cumberbatch breathes fire into the roll that, while not quite as vivid and eerily lifelike as Andy Serkis’ portrayal of Gollum – whadya expect, he’s a giant talking dragon – comes very close to stealing the show in a fantastic game of cat and mouse with Bilbo and the boys.

And then it’s done. Pure, drop-it-like-it’s-hot, that’s-all-folks done. In a similar repeat to how “Catching Fire” totally tonally ended, “The Hobbit: The Desolation of Smaug” fades to black at the time you least want it to. In other words, we won’t really know how this all ties together as a larger tale until next year.

See, unlike the 3 films in the “Lord of the Rings” trilogy (which, while maintaining a skeletal structure for the larger tale told, each felt like they had some form of closure by the time end credits rolled around), this simply feels like the middle of a movie that abruptly stops right when you are perched on the edge of your seat and someone sat on the remote control, inadvertently shutting off the show.

In other words, after gorging on parsley through the first film, and enjoying some tasty appetizers in this one, we’re left waiting, told that dinner isn’t served quite yet. Fine, I’ll bite. I’ll be there next year… and I’ll be much more excited about it than I was going into this film.