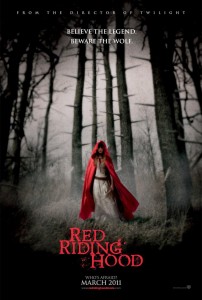 Short of an accidental fire burning all prints of Red Riding Hood, these are the most plausible solutions for making the film better. If I hadn’t gotten to see the movie for free, I would have demanded my money back. Actually, I may just go back to the theater and demand money from their ticket window. That’s legal, right?

I knew going into the theater that this film was directed by Catherine Hardwicke, who directed the first film in the Twilight series. We all know how much I enjoy that franchise. I realized, like most of my dates do when I pick them up, that in order to get any enjoyment out of the evening, I’d have to severely lower my standards. I just didn’t realize how low.

I’ll get it out of the way right here: this film is Twilight lite. Explanation to follow.

The film begins with a sweeping overhead shot of a small town in a remote wooded area (sound familiar?). I’m not really sure where Daggerthorn is located, nor can I figure out what time period the film takes place in. The weaponry and set construction would suggest a medieval time period, yet the majority of characters speak with an amazingly American accent, the colloquial dialect is modern, and Peter (Shiloh Fernandez) has a ridiculously modern haircut. The only people who speak with accents are the black soldiers and Father Solomon (Gary Oldman), a noted werewolf killer who, based on his accent hails, from…I have no idea.

Daggerthorn is home of Valerie (Amanda Seyfried), who is first seen murdering a rabbit for its fur. Somehow, the script makes this relevant later in the film. She and Peter grow from being friends as youths to carrying on a romantic relationship as they grow up. This is tempered by the fact that her mother arranged for her to be married to another male in the village, Henry (Max Irons), whom her mother thinks will provide a better life. Confronted with this fact, Peter breaks off their relationship and offers to leave her life forever, but Valerie loves Peter and is willing to sacrifice everything to be with him (hmm…)

Throughout the years, the town has been forced to deal with a werewolf that lives near them. Typically, they appease the wolf with an animal sacrifice, but the wolf kills Valerie’s sister, indicating the werewolf is no longer satisfied with animals. The men organize a hunting party and kill what they think is the werewolf, but Father Solomon arrives and states they merely killed a wolf, and the real werewolf is one of the people in the village.

Solomon goes on to explain the reason for the werewolf’s increased aggressiveness. Apparently there’s an imaginary planet that eclipses the moon every 30 years and tints it red for three nights. During this time, anyone the wolf bites will become a werewolf rather than die. It seems that this time is coming and the werewolf is looking for a successor. The film then documents the village’s attempt to stop the werewolf. During one of the attacks, Valerie encounters the werewolf and discovers she has a deeper connection with the wolf than she realized.

This film just fails on so many levels, it’s hard to pick a spot to begin.

The acting is subpar. There really isn’t much to work with in terms of lines, but the execution is just crap. None of the characters evoke any feelings from the audience, other than relief when the credits roll. I honestly couldn’t care less about what happened to any of the characters. Solomon’s accent is caricatured, and as noted, most of the characters seem to be American. The lack of accents can be forgivable in a film, but you’d think some of them would at least try.

The writing is atrocious. The dialogue is flimsy and predictable. The intended plot twists seem to follow what I call the “24/Lost” effect: they’re present just for the sake of having plot twists. There are no scary moments to make the audience jump, and all supposedly tense moments are ruined by a building musical crescendo.

The visuals are on par with a B-movie. The village looks like it was constructed on a soundstage. The werewolf is only seen a handful of times, probably because of how mediocre it looks. On top of all that, despite the fact that the bulk of the story takes place during the winter, all of the characters seem to be dressed for fall, rarely wearing anything more than light coats. Perhaps medieval Europe had Under-Armour cold weather gear.

As mentioned, Hardwicke seems to have taken much of the story straight out of Twilight: the small, remote town; two handsome men vying for the affection of an average-looking girl; the thought of the girl sacrificing everything to be with the one she loves; WEREWOLVES; Billy Burke is the father of the protagonist of both movies, blah blah blah.

If you’re a fan of the Twilight movies, you might like some elements of this movie, but the rest of us won’t. The lone bright spot I found in the movie? The moody, Explosions in the Sky-esque guitar work at the beginning and end of the movie. The rest of the movie is just horrible. Trying to comprehend the story and decision-making of the producers, I found myself saying “What?” more than a Lil’ John album. If you feel like seeing Red Riding Hood, just print out a picture of Gary Oldman and look at it while you punch yourself in the face. You’ll get the same experience as seeing the movie and you’ll save yourself $10.

Red Riding Hood gets a “How did this movie ever get made? There must be no God.” Or an F.